He also pardoned former New York Police Commissioner Bernard Kerik, convicted of tax fraud and perjury, and commuted the 14-year jail term of former Illinois Governor Rod Blagojevich, impeached and then convicted on multiple corruption counts, including attempting to sell the Senate seat of Barack Obama after Obama’s election to the presidency in 2008. Blagojevich, a Democratic congressman before his election as governor, was released from prison immediately on Trump’s orders, and declared himself a “Trumpocrat” in the 2020 election.

Trump’s actions in relation to Milken and De Bartolo are a clear demonstration of class justice, in which billionaires are effectively above the law. As one news report noted, there are only 600 billionaires in the United States, very few of them face trial and conviction, let alone jail time, and Trump has now pardoned three of them, including last year’s clemency for media mogul Conrad Black—author of a fawning pro-Trump volume—who served nearly two years in prison for fraud and embezzlement.

Milken was one of the most important actors in the financialization of the US economy, devising “junk bonds”—high-risk, high-return corporate securities that became a spearhead in the employer offensive against the working class throughout the 1980s and beyond. Hedge funds and private equity firms used junk bonds to finance leveraged buyouts of companies and proceed to loot pension funds, slash wages and benefits, and squeeze every penny of profit out of what frequently became empty shells.

In the process, Milken himself amassed a huge fortune, including a then unprecedented income of $550 million in 1987, while running a unit of Drexel Burnham Lambert, a second-tier Wall Street firm that rocketed to prominence in that decade. These operations were portrayed in such books as Den of Thieves and films like Wall Street, whose lead character, Gordon Gekko, was modeled after Milken’s partner-in-crime Ivan Boesky.

After pleading guilty to 10 counts of financial fraud in 1990, Milken served less than two years at a “Club Fed” luxury prison for the rich. He paid fines and restitution of $600 million, which barely made a dent in his multi-billion-dollar fortune. Trump’s pardon message paid tribute to Milken’s endowment of various medical charities and cancer research and hailed him as “one of America’s greatest financiers.”

De Bartolo was charged with paying a $400,000 bribe in $100 bills to Louisiana Governor Edwin Edwards, a Democrat, in return for state government approval of a riverboat gambling project in which he had invested. Edwards went to prison, while De Bartolo served no time but had to transfer ownership of the 49ers to his sister. His nephew now runs the franchise. The National Football League inducted De Bartolo into its Hall of Fame despite the criminal conviction. 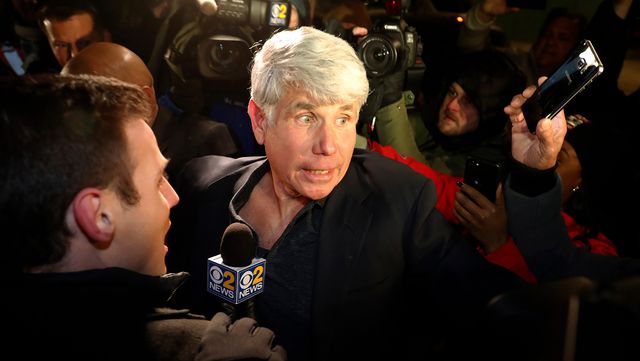 Blagojevich and Kerik are lesser figures in terms of wealth, but gained national prominence in capitalist politics. Blagojevich was recorded in a wiretap soliciting bribes and campaign contributions from the Service Employees union and various wealthy individuals interested in his selection of a successor to Obama in the US Senate.

Kerik is a longtime crony of Rudy Giuliani, now Trump’s personal lawyer and political fixer. He was the driver and bodyguard for Giuliani during his campaign for mayor of New York City, and Giuliani eventually elevated him to police commissioner, where he was widely rumored to be receiving bribes from organized crime families.

Despite this atrocious reputation, Kerik was actually chosen by President George W. Bush to head the Department of Homeland Security, but had to withdraw after corruption allegations surfaced. In 2009 he pled guilty to charges of tax fraud and lying to investigators and spent three-and-a-half years in federal prison.

The remaining seven pardons and commutations include a Republican political operative, David Safavian, convicted in the Jack Abramoff corruption scandal, a Cuban-American businesswoman from south Florida convicted in a massive Medicare fraud scheme, and two other corporate executives convicted on fraud and tax charges (one a significant Trump campaign donor).

Trump also pardoned three minority women convicted of nonviolent or white collar crimes, to serve as window dressing, but no minority men. As one account of the pardons and commutations noted, Trump has pardoned only one African American man in more than three years in office, and the beneficiary of that pardon had been dead for 72 years when it was issued: the late boxer Jack Johnson, whose conviction by an all-white jury took place more than a century ago.

The timing of the pardon and commutation decisions was significant from a number of standpoints. They had clearly been delayed until after Trump himself was acquitted in the Senate trial on impeachment charges brought by the Democratic-controlled House of Representatives, in order to avoid giving his political enemies additional ammunition.

And they come as part of a broader political offensive launched by Trump in the wake of impeachment, including firing or removing officials who testified in the impeachment inquiry or opposed his actions in delaying US military aid to Ukraine, the action that sparked his impeachment, and demanding that charges be quashed against his own associates arising from the investigation by Special Counsel Robert Mueller.

The pardons were issued only two days before Judge Amy Berman Jackson is to impose a sentence on Roger Stone, a longtime Trump crony, for lying to Congress and the FBI and witness intimidation in a case that stems from the investigation by Mueller into alleged Russian interference in the 2016 US presidential election.

After federal prosecutors last week recommended a jail sentence of seven to nine years for Stone, Attorney General William Barr intervened and overturned the recommendation, proposing instead that the judge take a far more lenient approach.

All four prosecutors resigned from the case in protest of Barr’s action, and a petition calling for Barr’s resignation and opposing White House interference in the handling of federal criminal cases has been signed by more than 2,500 former federal prosecutors and other former officials of the Department of Justice.

Trump has attacked Judge Jackson on twitter several times in the past two weeks, leading the chief judge of the District of Columbia District Court, Beryl Howell, to issue a statement declaring that “Public criticism or pressure is not a factor” in judges’ rulings or sentencing decisions. The Federal Judges Association, an informal lobby of more than 1,000 jurists, scheduled an emergency meeting for Wednesday, although the meeting was called off at the last minute without explanation.

Judge Jackson is to sentence Stone today, but she seemed to bow to White House pressure by declaring in advance that she would not give effect to any sentence until the motion by Stone’s attorneys for a new trial had been adjudicated. In other words, Stone will not go to prison soon, if at all.

In the meantime, Trump’s pardons have sent a clear message that he is prepared to dole out similar treatment to Stone, former campaign manager Paul Manafort, retired Gen. Michael Flynn, and other Trump allies who have pled guilty to crimes like fraud and perjury.

In response to media attacks and even a mild critical remark from Attorney General Barr, who said Trump’s tweets were making his job more difficult, Trump has renewed his declarations that he is “the chief law enforcement officer of the country,” with unlimited power to intervene in the criminal justice system as he pleases.

In the wake of the impeachment debacle for the Democrats, Trump is asserting quasi-dictatorial powers, defying any effort to set limits on the power of the executive branch.