Trump, Bolsonaro, Modi, Johnson. Across the world, flouting the law has become normalised. We have to stop it. 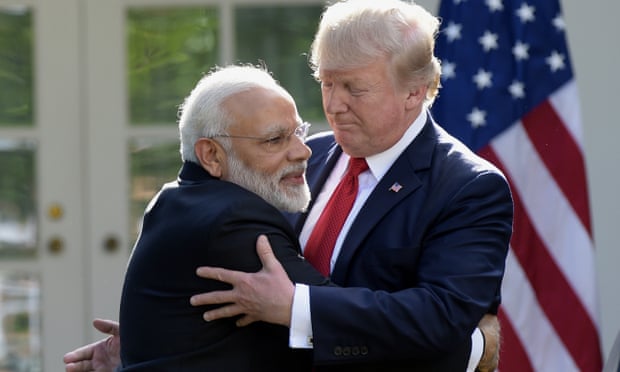 5 Feb 2020 – It is not a sufficient condition for fascism to take root, but it is a necessary one: the willingness of political leaders not only to break the law but to revel in breaking it is a fatal step towards the replacement of democracy with authoritarian terror.

We see this at work in the United States today, where the Republican party’s blatant disregard for the constitution will allow Donald Trump to escape impeachment.

If Trump is elected for a second term, he will test to the limit the potential for wielding unconstitutional power. But the phenomenon is not confined to the US. Several powerful governments now wear illegality almost as a badge of honour.

It’s happening in the UK too. The Brexit vote was secured with the help of blatant illegality.

Fascist and prefascist governments share, among others, two linked characteristics: they proudly flout the laws that are supposed to restrain them while introducing new, often unconstitutional laws to contain political opponents or oppress minorities.

In Brazil, outrages against indigenous people, opposition politicians and journalists are encouraged and celebrated at the highest levels of government. Jair Bolsonaro won the presidential election with the help of a judicial coup in which due process was abandoned to secure the imprisonment of the frontrunner, Luiz Inácio da Silva (Lula). Bolsonaro has been photographed embracing two of the suspects in the murder of the leftwing councillor Marielle Franco, and has sought to block corruption investigations into his son Flávio, who allegedly has close links with members of the paramilitary gang accused of killing her.

In response to democratic protests, Brazil’s economy minister has threatened to impose martial law. Bolsonaro has called for the police to execute suspected criminals: “These guys are going to die in the streets like cockroaches – and that’s how it should be.” His racist comments about indigenous people, and curtailment of the agencies supposed to protect them, could help explain a new spate of murders by loggers, miners and ranchers. Human rights groups are urging the international criminal court to investigate Bolsonaro for incitement to genocide.

The investigative journalist Glenn Greenwald, who has published explosive reports about corruption and crime in Bolsonaro’s government, and his husband, the leftwing congressman and Guardian columnist David Miranda, have received repeated death threats, containing details about their lives that only the state could know. Greenwald has now been spuriously charged with cybercrimes.

In India, Prime Minister Narendra Modi, after discovering that his alleged association with the 2002 Gujarat massacres no longer appeared to tarnish his name, is laying the foundations for a vicious ethno-nationalism. His new citizenship law deliberately denies rights to Muslims and could render millions of people stateless. People protesting against this act are brutally attacked by the police. Police and armed gangs have raided two Delhi universities, randomly beating up students, to spread generalised terror. In Uttar Pradesh, political opponents are routinely imprisoned without charge and tortured.

Modi has ripped up the constitution to annex Jammu and Kashmir. The police have fired on people protesting peacefully against this illegal action, blinding some of them with shotgun pellets. Political leaders have been arrested and communications shut down. Officials treat this illegality as a brutal joke. Haryana’s chief minister, Manohar Lal Khattar – a close Modi ally – boasts that “now we will bring girls from Kashmir”, as colonial booty.

The president of the Philippines, Rodrigo Duterte, has bragged of riding around the streets of Davao on his motorbike when he was mayor of the city, shooting people he suspected of being criminals. Since becoming president he has, in effect, turned the police into a giant death squad, empowering them to murder people they believe to be involved in drug crime. Unsurprisingly, this general licence has led to the murders of political opponents, and land and environmental defenders.

Even as he applauds the killing of drug suspects, Duterte jokes about taking illegal drugs to keep himself awake at international summits. Opponents are imprisoned, judges are sacked and replaced, journalists are prosecuted on trumped-up charges. The imposition of martial law on the island of Mindanao is used to crush dissent; objectors are treated as terrorists and murdered.

Like these other killer clowns, Trump may now feel he can do anything. His legal team has in the past suggested he has total immunity, boasting that he could literally get away with murder. A culture of impunity is spreading around the world. “Try to stop me” is the implicit motto in nations ranging from Hungary to Israel, Saudi Arabia to Russia, Turkey to China, Poland to Venezuela. Flaunting your disregard for the law is an expression of power.

It’s happening in the UK too, though so far on a smaller scale. The Brexit vote, which eventually enabled Boris Johnson to take office, was secured with the help of blatant illegality. The government intends to carry out a legislative cleansing of Romany Gypsies and Travellers, knowing that this offends our own Equality Act, and is likely to lead to a case before the European court of human rights. It’s almost as if it welcomes the confrontation.

These are experiments in absolutism. They don’t amount to fascism in their own right. But in conjunction with the elevation of preposterous and desperate men, the denigration of minorities and immigrants, political violence, mass surveillance and widespread mockery of liberalism and social justice, they suggest that some countries, separately and together, are beginning to head towards the darkest of all political places.

The normalisation of impunity is possibly the most important step towards authoritarian rule. Never let it be normal.