Who Is Right, Lyn or Pam? Using Conflict Resolution Scenario Methods to Resolve an Organisational Conflict

11 Feb 2020 – Lyn and Pam (names have been changed) are co-workers in an Australian organisation. They are in the middle of a conflict that has been brought to their director’s attention. The director is not sure whether to engage with this conflict, as it appears rather trivial. Like most people do when it comes to conflicts, the director is hoping that the quarrel will dissipate and disappear on its own. Also like most people, she habitually uses a style of conflict resolution that she learned in her family of origin; she applies it to all conflicts, regardless of the context. She has spoken to both Lyn and Pam, yet the conflict persists. Team work is suffering and the organisational targets are not going to be met. 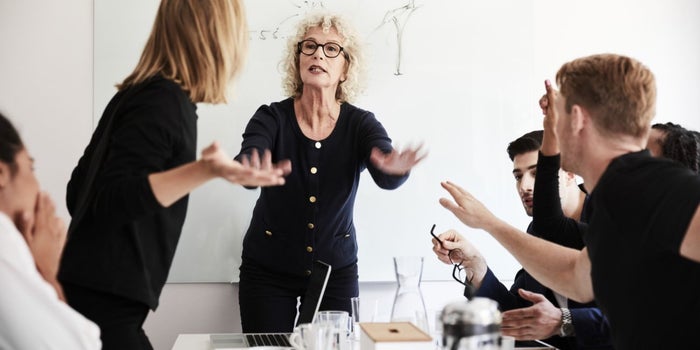 Conflict in organisations can take many forms and can manifest at different magnitudes. Left to fester, conflicts can have a number of detrimental consequences for the organisation and the people who work in it. The ten biggest costs of organisational conflict have been identified (Blank, 2020: 46) as:

Conflicts have been part and parcel of human experience. For a very long time, humans have tried to solve conflicts and have developed a host of strategies which can be grouped into four basic categories (Ury et al 1988, Galtung, 1965): 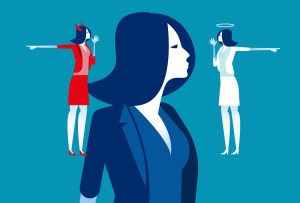 It is clear from the above that the way conflict is resolved and whether such conflict resolution is sustainable is highly dependable on the way the conflict is framed. The way conflict is framed then influences the question asked and the strategies used. The underlying views and assumptions about human nature – such as (1) humans are violent and world is competitive vs. (2) humans are rational and can resolve conflicts non-violently vs. (3) humans are naturally good and connected with everyone and everything else that exists vs. (4) humans are all those things – will also impact on a choice of strategies. Finally, personal and cultural factors determine whether parties involved will be able to resolve the conflict themselves informally or there will be a need for the third party and formal involvement. As the power of disputants to manage their own conflict decreases, so does the potency of interest and needs based methods, to be replaced by rights based and power-based methods instead. As evocatively expressed by Kraybill (2001: 18) when law begins community ends.

At the organisational level, disputants commonly have access to a range of these methods, and sometimes legal instruments are needed. Legal processes, however, are costly and time consuming so interest or needs based methods are preferable when there is still even a semblance of a community within an organisation. Moreover, even after legal processes are completed, organisations need to restore optimal communal functioning. Conflict resolution scenario methods (CRSM) help with such organisational, interpersonal and community-based disputes.

The (trivial?) conflict between Lyn and Pam is as follows:

Pam recently moved to the same shared, open-space office where a number of other people, including Lyn, work. When she met everyone, she introduced herself as Pam. While all other people call her by that name, Lyn refuses to. Instead, as is the custom in some parts of Australia, she decided to make her name longer and add ‘o’ to it. The day Pam became ‘Pam-o’ was the day she became irritated by Lyn. At first, she tried to ignore her. Then she became stern and rude towards her. Then she engaged in some passive aggressive behaviour, refusing to follow up on the projects that were to be done cooperatively. After a number of months, she stopped talking to Lyn completely. She tells her friends that Lyn is a horrible person. Pam’s friends at the office agree. They say Lyn is a ‘country bumpkin’ and a ‘bogan’ [an Australian slang for an uncouth or unsophisticated person regarded as being of low social status]. Lyn has no idea why Pam is so upset. Her and her friends think Pam is a bit uptight and should mellow out. Lyn is higher in the organisational hierarchy though not directly Pam’s superior. Pam has worked in that organisation for a longer time but has never confronted Lyn about the nickname issue directly.

From the outside, the conflict between Lyn and Pam seems relatively easy to resolve. The director of the organisation thought that by raising the issue with Lyn, she would stop her behaviour. However, Lyn claims that she has trouble distinguishing between Pam and Pat who both work at the office, so calling Pam Pam‘o’ makes it easier for her. Pam rejects this explanation and believes Lyn’s motives are more sinister. In any case, both are now so irritated with each other that they are requesting the director to ‘chose a side’ and to explain the other one why she is wrong in her thinking and behaviour.

The director herself became irritable that she has to waste her time on a trivial conflict, instead of focusing on reaching organisational targets. She attends a futures workshop (which I co-facilitated) where Conflict Resolution Scenario Methods (CRSM) are used.

I have previously used CRSM on a number of conflicts and in a number of settings. For example, I have written a theoretical piece, published in 2008 in Journal of Futures Studies, which applied it to an international, inter-ethnic conflict (Milojević, 2008). I have also used it to better understand and propose solutions to an intergroup conflict, e.g. the Australian 2005 Cronulla Riots. Finally, I have used it to assist disputants resolve interpersonal conflict, such as the one between Lyn and Pam.

In a nutshell, CRSM proposes there are five basic future outcomes of any given conflict between two disputants. Based on works by Johan Galtung (the TRANSCEND method), Thomas Kilmann Conflict Mode Instrument and Ron Kraybill’s Conflict Styles method, the five possibilities are summarized as follows:

Researchers have found that most people are comfortable using one or two conflict resolution styles and that they apply them to most situations, irrespective of circumstances. Personal, cultural and ideological factors also play a role. ‘My way’ approaches are more popular with people who hold political and economic power, and in individualistic, competitive based cultures. ‘Your way’ approaches are commonly utilised by those who have a dominant ‘pleaser’ self. Most people, most of the time, try to not deal directly with conflict, i.e. to not engage or somehow withdraw from it. Most of us are conflict avoiders (most of the time) even though the news makes it seem we are all at war with each other. ‘Our way’ or ‘win-win’ solutions are favoured by cooperative cultures and left leaning ideologies.

Each of these styles, however, has costs and benefits. What is helpful for conflict resolution, in organisations and elsewhere, is to get out of routine responses to conflict, critically evaluate which style may be the most appropriate and help our (reflective) self choose the style rather than a particular style becoming the core of our identity/habitual response.

Certainly, conflict resolution is enhanced if there is empathy (with all parties), nonviolence, creativity (imagination is practiced), honesty and compassion, and a focus on needs (Galtung, n.d.). Some knowledge and understanding of the conflict itself as well as perspectives of all involved is needed. The better the understanding, usually the more appropriate the response. The goal is a solution/outcome that is acceptable and sustainable (Galtung, n.d.).

CRSM facilitates moving away from the problem (past/present, unmet expectations) to the future (going beyond, ‘dis-embedding’ the conflict from where it is currently located and ‘embedding’ it elsewhere’ (Galtung, n.d., Boulding, 1988). When we access the future – where people could be or want to be, rather than where they were or are – we immediately move to a better place as far as conflict resolution goes. Once again, as argued by Johan Galtung, the more alternatives are presented and developed by people, the less likely they are to engage in violence, whether direct, structural, cultural, epistemological or psychological.

CRSM is helpful as it can map the conflict before a decision as to which style of conflict resolution is the most appropriate can be made. 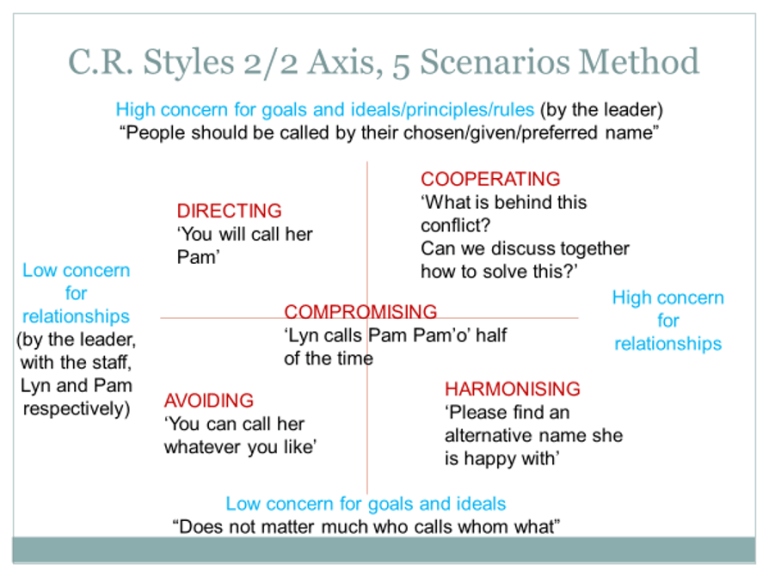 After overviewing these possible strategies, the decision was made that some of them are either not going to work (e.g. ‘Lyn calls Pam Pam‘o’ half of the time’) or are going to create further conflict and friction (e.g. Directing or Avoiding). The director and her other co-workers present at the workshop then applied the TRANSCEND Method’s axis to come up with a host of cooperating, collaborative, TRANSCENDent and imaginative ‘our way’ strategies. These are presented on the right side of the following table: 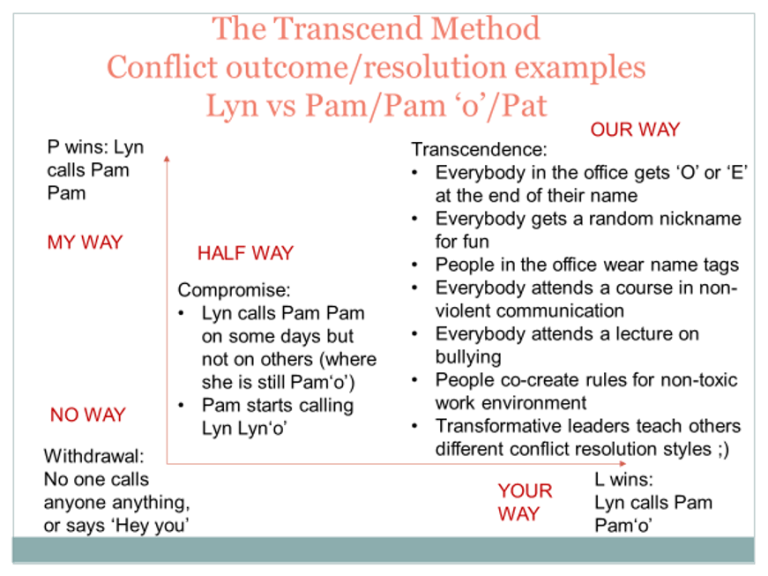 As is visible from the above paragraph, the TRANSCEND method focuses on five possible outcomes as does the two by two axis, five scenario method. Both reframe conflict as an opportunity to create something new and improve relationships in the long-term. However, the TRANSCEND method orders them differently so to enhance futures direction. Furthermore, TRANSCEND method privileges ‘our way/win-win/cooperating’ approach and is useful when such strategies are considered the most appropriate. At the same time, our way/cooperative strategies may not be appropriate if (1) the time to resolve the conflict is too short, (2) people are overloaded with ‘processing’, (3) the goals and issues of one disputant are undoubtedly wrong or (4) when the disputed issues are not really important for anyone. To further ascertain which of the five futures outcomes and styles (Style Matter, 2020) may be the most appropriate for the specific conflict, mapping via two by two axis, five scenario method is critical.

Dr. Ivana Milojević is a researcher, writer and educator with a trans-disciplinary professional background in sociology, education, gender, peace and futures studies and Director of Metafuture. She has held professorships at several universities and is currently focused on conducting research, delivering speeches and facilitating workshops for governmental and academic institutions, international associations, and non-governmental organizations around the world. Dr Milojević can be contacted at ivana@metafuture.org