Why Be a Pacifist?

From developing a pacifist economy to addressing structural injustice, author Tim Gee discusses the challenge and potential of pacifism in the 21st century. 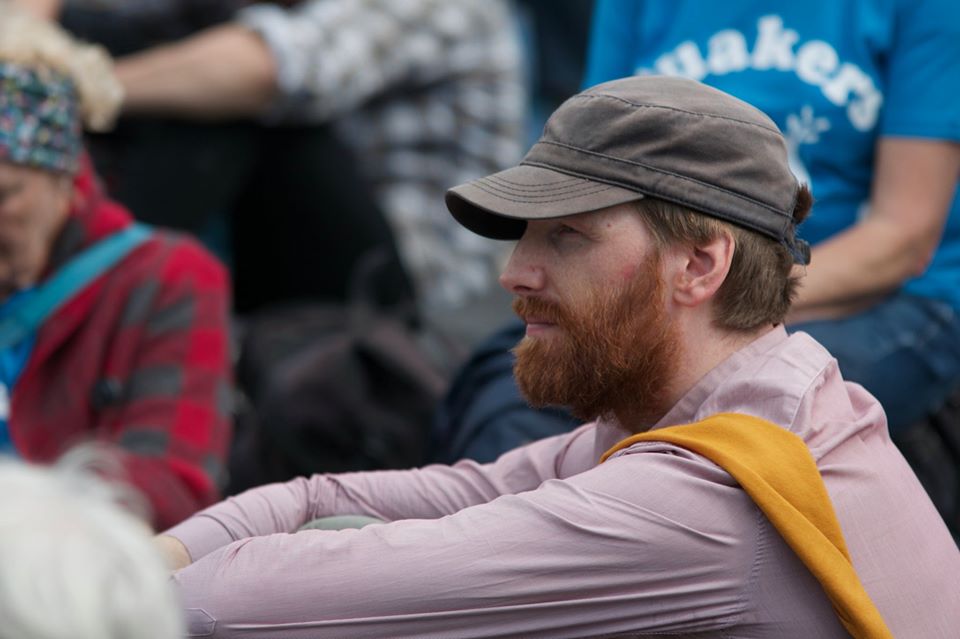 Dec 2019 – Tim Gee had a transformative experience as a teenager. A group of bullies taunted him and his friends with homophobic slurs, then pelted them with eggs. Gee and his group decided to retaliate: They went out and bought a carton of eggs, snuck up on the bullies and made their own attack — feeling victorious as they drove away.

It wasn’t long, however, before Gee had the sinking feeling that they had done something wrong. Having grown up in a British Quaker family, he was perhaps primed to feel deeply affected by this schoolyard feud. While some people become pacifists after going to war, throwing those eggs was all the convincing Gee needed to start his lifelong journey of exploring what it means to be a pacifist in the world today.

In the two decades since that day, Gee has dedicated his life to peace activism and environmental organizing. In 2010, he was a member of a group dubbed the “Superglue 3,” having glued himself to the Royal Bank of Scotland protesting its investment in tar sands. More recently, he took part in London’s climate strikes and a sit in that helped disrupt the world’s biggest arms fair. Gee’s third and recently published book, “Why I Am A Pacifist,” explores the personal experiences and philosophical arguments that led him to become a pacifist, and how this informs his activism today. 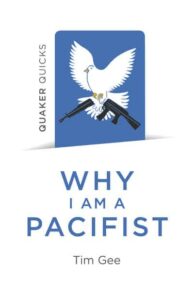 I spoke to Gee on Remembrance Day, an occasion when people in the United Kingdom wear red poppy pins on their shirts to commemorate the end of the First World War. We spoke about the role of faith in his pacifist approach to activism, and the linkages between war and climate change. Gee emphasized that a truly pacifist movement will require a nuanced approach to building a new society. From developing a pacifist economy to addressing structural injustice — bound up in racism, misogyny and xenophobia — Gee described the challenge and potential of pacifism in the 21st century.

In “Why I Am a Pacifist,” you emphasize an important point: Pacifism is not passive. Do you find that people struggle with this concept and can’t imagine pacifism adequately dealing with tough issues, like fascism or the climate crisis?

I thought long and hard about whether to use “pacifist” in the title of the book. It was when I looked up the origins of the word that I decided I would. Pacifism literally means “peacemaking.” And although it has often been conflated with not doing something, the case I make in the book — building on lots of other people’s work — is that pacifism is a process of creating the conditions of peace. It is the presence of justice, not the absence of tension, as Martin Luther King, Jr. said.

When I think about fascism, and what the core components are of the fascist point of view, these are ultimately the things pacifism tries to take away: toxic masculinity and the swaggering aggression that goes with it, strong pride in the military and obviously a deep racism. If we take an approach to pacifism that addresses racism and economic inequality, fascist ideas can’t thrive in that environment.

Furthermore, the climate crisis is deeply related to peace. The very power dynamics that have led to the current destruction of the planet are the same ones that lead to war. I became an environmentalist shortly after I became a pacifist, after the wars in Iraq and Afghanistan began. I made the link between wars for oil and oil causing climate change, and have been almost a full-time activist ever since.

Quakers have a long tradition of working for peace and justice. How has your Quaker faith shaped your pacifist beliefs?

One of the images used for peace, the dove, is an image that arises out of Christianity. It can often be used as a representation of the presence of God. The idea that peace and the presence of God are the same is quite a powerful one. Beyond the rational arguments, this is the experienced truth for many Quakers of what keeps them going in the context of an extremely violent society.

More:  New language for nonviolence — a conversation with Tim Gee

In some of the nonviolent discourse, and particularly among some advocates of strategic nonviolence, there’s a hesitancy for an approach that allows space for the spirit. We need something inside us to keep us going. When I wrote my first book, “Counterpower,” I was reading Gandhi and King, and just focusing on their political strategy. It was only when re-reading [Gandhi and King] that I found it is very difficult to read these people in an entirely secular way. The spiritual struggle was every bit as much of it for them as the political struggle. So I’m not saying that nonviolence needs to be religious or spiritual, but I would like to make space for it because it can be an important part of social change.

In your vision of a pacifist society, what is the interplay between direct action against militarism — like the London Arms Fair blockade — and the deeper structural work of addressing racism, sexism and economic injustice?

The London Arms Fair is one of the world’s largest arms fairs, and there are literally tanks on the streets, on the backs of lorries. There are human rights-abusing countries from around the world — Bahrain, Saudi Arabia, Israel — who all came [to the Arms Fair] this year. I would also include countries like the United States, which is going to be using weapons bought there in its current policies. There are only two main gates to enter the Arms Fair, so I went there with Quakers and people of many faiths, and together we blocked one of the gates for most of a day.

We held two Quaker meetings for worship that were very moving. At one point, a constable interrupted us and said that anyone who didn’t move was going to get arrested. For a lot of people, that prompted cultural memories of Quaker meetings in the early days being broken up by constables. Not one person moved until the scheduled end of the Quaker meeting.

But they still managed to get the other gate open, and even if we had closed both of the gates, we wouldn’t have stopped war. It would have been a wonderful symbolic victory, but we wouldn’t have stopped war. And I think that’s one of the reasons why I wrote “Why I Am A Pacifist.” It’s because I want to make a distinction by saying that we can go protest outside the London Arms Fair every two years, but being a pacifist means identifying the injustices, the metaphorical traffic leading to war that we experience in our everyday lives, of which I would include any policy or practice informed by racism, gender inequality or anything that perpetuates economic inequality.

By broadening out and saying the traffic to war exists in all our lives, I want to say that each of us has many opportunities each day to prevent the conditions that lead to war. That means campaigning against things like the flagship racist policy in the United Kingdom, the Hostile Environment Policy, which is every bit as important and integral to pacifism as is going to the Arms Fair and sitting in lorries loaded with tanks.

What does a pacifist foreign policy look like to you? When President Trump made the sudden announcement to withdraw U.S. troops from Syria in October, he appropriated language of the peace community by claiming this was a step towards “ending endless war.” Are you ever challenged by those who equate pacifism with international isolationism?

A pacifist foreign policy would naturally have to be internationalist and solidarist. I don’t see any other way to do it. I support the idea of a uniformed service because I think there’s a lot of ways the passion and skill currently used in the military could be used, as it is to some extent in clearing mine fields or rescuing people from the most extreme effects of climate change that we’re already facing. So I support a pacifist and internationalist foreign policy.

On Syria and the situation of the Kurds, I found myself — for the first time — on a march to call not for the withdrawal of our troops alongside the Kurdish community in the United Kingdom. That was maybe a surprise, but this ultimately wasn’t a withdrawal of troops in order to build peace. The United States could have brought parties together in such a way as to create an agreement and slowly withdraw, leaving peace behind. Instead, the United States left in a way that has led to war crimes and maybe even worse than that. So that’s why I protested against that withdrawal, and that’s why I’ve protested against the Arms Fair when Turkey attended.

I think intentionality is important. When people say the United States and United Kingdom go to war in the Middle East on some kind of humanitarian mission, this withdrawal shows that’s not the case. This withdrawal has opened the way for an awful humanitarian situation. That’s how I’ve approached the issue — I do so as a pacifist. To my Kurdish fellow activists I’ve said, “I am a pacifist. Am I welcome? How can I help?” And they have said, “Yes, you are welcome,” and “Yes, you can help.” It needs to be done from a position of solidarity. You sometimes do find puritanical pacifists who would not march alongside someone who isn’t a pacifist, and I think that approach is not fully thought through.

We are seeing such a powerful shift in the momentum around climate justice work. What are some of the deep linkages between a movement to address the climate crisis and global militarism?

The climate justice movement in the United Kingdom is bigger right now than it has ever been. Awareness of climate change, including in the priority lists of issues by voters, has skyrocketed in the last year alone. The youth climate movement and school strikers are the most intersectional environmental movement I’ve ever encountered. So my experience with school strikers is that the arguments I make in the book about all of these issues needing to be linked is just obvious to them. It doesn’t need explaining.

One of the slogans people have been chanting on the streets is “Cash for climate, not for war.” It’s an overwhelmingly nonviolent movement, and a movement which understands that a more climate friendly world would be a more peaceful world, by not pursuing so many wars for oil — not to mention the contribution of militaries to climate change directly. So I have a lot of hope for the youth climate movement. I think about my generation, the people who became politicized through the wars in Afghanistan and Iraq, who are now beginning to enter politics and take some positions of responsibility. But young people today are even more passionate and determined, and they’re not going to wait 15 years until they are put in positions of leadership. I think it’s up to the rest of us to listen and follow.

Sarah Freeman-Woolpert is a writer, researcher and organizer focused on nonviolent social movements and creative action. She lived for two years in the Balkans, studying and supporting youth activist movements. Sarah now works as a grassroots organizer for peace and justice and is based in Boston.