Confessions of an Economic Hitman 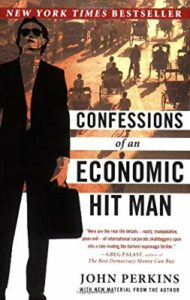 According to Perkins, he began writing Confessions of an Economic Hit Man in the 1980s, but “threats or bribes always convinced [him] to stop.”

Perkins’ function was to convince the political and financial leadership of underdeveloped countries to accept enormous development loans from institutions like the World Bank and USAID. Saddled with debts they could not hope to pay, those countries were forced to acquiesce to political pressure from the United States on a variety of issues. Perkins argues in his book that developing nations were effectively neutralized politically, had their wealth gaps driven wider and economies crippled in the long run. In this capacity Perkins recounts his meetings with some prominent individuals, including Graham Greene and Omar Torrijos.

Anticopyright: Editorials and articles originated on TMS may be freely reprinted, disseminated, translated and used as background material, provided an acknowledgement and link to the source, TMS: Confessions of an Economic Hitman, is included. Thank you.