On Hanging from the Blades of a Bulldozer: Al-Naem Is Every Palestinian 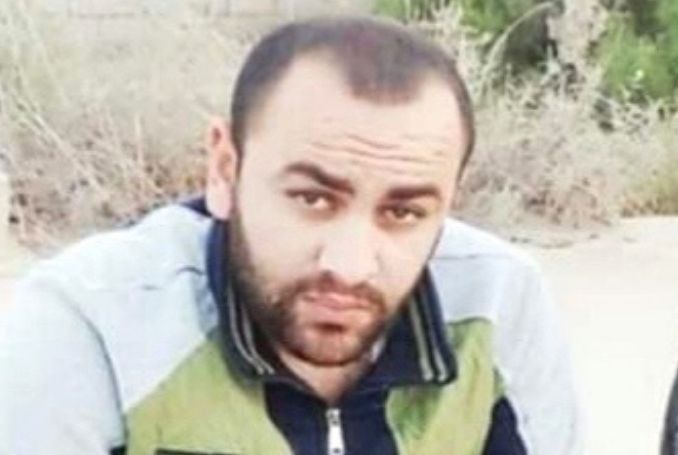 The body of Mohammed al-Naem (27) was dragged by an Israeli military bulldozer near the Gaza fence.
(Photo: via Social Media)

27 Feb 2020 – How is one to apply rational political analysis to what is inherently irrational? What kind of political theory must one consult to formulate and test hypotheses when the information at hand is so grizzly, sadistic, and reeking with unbearable contradictions?

Seeing the gaunt body of Mohammed al-Naem hanging from the blades of an Israeli military bulldozer near the fence, which separates besieged Gaza from Israel, left me speechless. There is nothing in the field of political science that can convincingly explain the logic of that heart-rending scene.

Come to think of it, killing a Palestinian then dragging his lifeless body using the blades of a bulldozer, thus denying his family the dignity of burying their beloved son or daughter, is unique to Israel; an act that manifests itself in numerous ways every single day in occupied Palestine.

We often speak of Palestinian human rights – thus of Israel’s violation of these rights, of justice and peace – often contending that one is the prerequisite to the other. But how about humiliation, just for the sake of humiliation?

How about the purposeful degradation of Palestinian women and men who, daily, would have to navigate numerous obstacles imposed on them by the Israeli army, not only to survive but also to preserve as much of their dignity as possible under circumstances that are almost entirely out of their control.

Naem was only 27 years old when he was killed, thus he was merely 13 years of age when Israel placed the minuscule Gaza – 365 square kilometers – under a hermetic and deadly siege.

Chances are Naem’s political discourse was already inundated with terminology that no child anywhere in the world should be exposed to. He must have already been familiar with the concept of martyrdom, as he watched close relatives, friends and neighbors, children of his age and even younger being killed by the Israeli military for no reason whatsoever except their insistence to live a life of dignity – a wish that Naem himself was denied.

The Israeli military, which was forced to accept the damning evidence that the Palestinian man’s body was in fact “collected” by a bulldozer, countered with the same familiar lines – that Naem, along with his peers, were members of a “terrorist organization” and that they were planting explosives near the fence.

Sadly, many are willing to consume this kind of propaganda, always ready and willing to blame Palestinians for anything and everything.

But let’s assume for a minute that the Israeli army narrative is true. Should we be surprised that a man who grew up under siege, who experienced, since childhood, the most horrific and unjust Israeli wars, would grow up to be a fighter, defending whatever dignity that is left for him and his family?

What is so shocking about Palestinians fighting back? Why do the rules that applied to every national liberation movement around the world and throughout history, do not apply to Palestinians?

Why should Palestinians take their punishment and accept their perpetual humiliation, besiegement, and victimhood as if they are subhumans incapable of engaging with the most basic human instincts, that of self-defense, sacrifice, and self-preservation?

Naem must have joined the Great March of Return at some point, which, at its peak, was the largest collective non-violent mobilization anywhere in the world.

Tens of thousands of besieged Gazans took part in that inspiring spectacle, starting on March 30, 2018, where they have gathered every single week facing Israeli snipers with nothing but their bare chests and resounding chants.

Yet over 300 of these protesters were killed in the first year alone. Among the thousands who were injured, hundreds of lost limbs, becoming physically disabled for life.

While Gazans continue to reel under the horrific impacts of the Israeli siege, one can only imagine the kind of inadequate medical attention these wounded men, women and children have received.

The fact is, Naem is Gaza. He is every Palestinian man, woman, and child in that tragic place. He is also every Palestinian man, woman, and child standing at an Israeli military checkpoint in the West Bank, hoping to be granted entry to their jobs, schools, hospitals or back home. Naem is every prisoner held unlawfully in Israeli prisons, tortured and humiliated as a punishment for demanding the most basic rights for his people.

The Israeli bulldozer that dangled Naem as if some sacrificial lamb, in front of TV cameras in the middle of the day, although unwittingly, sent a message to the rest of the world: this is us, Israel is the bulldozer, and this is them, Naem is the Palestinians, in all of their vulnerability, nakedness, and defeat, and there is nothing that anyone can do about it.

“Israel has the right to defend itself” is the typical retort emanating from Washington and its western allies, and now, even by some Arabs. Translation: Israel has the right to oppress and besiege Palestinians, to disrupt any sense of normalcy in their life, to deny them food and medicine, to block every entrance and every exit, to trap them for eternity; Israel also has the right to kill anyone who dares challenge this inhumane paradigm, and, when it chooses, to dangle his or her corpse from the blades of a bulldozer, so that it can restate the rules of the game over and over again.

Political science cannot help us much here, but history can. The humiliation of the Palestinians is part and parcel of an Israeli historical discourse that has dehumanized the Palestinians to the extent that during the genocidal war of 2014, Israelis gathered to watch the onslaught in Gaza, dancing and barbecuing and cheering every time white phosphorous came raining down on hapless Palestinians.

But this should not come as a surprise. The dehumanization of Palestinians by Israeli Zionists has been the most consistent discourse that is shared by all of them, even when they claim to represent the political right, left or center.

The perception of Palestinians as ‘beasts’ and ‘cockroaches’ who deserve to be erased and ethnically cleansed without impunity has penetrated every stratum of Israeli society, politics, and even school curricula.

The grisly murder of Naem represents the essence of Zionism, a political ideology that was modeled after European fascism, and despite its claims of progress and enlightenment has remained the world’s most backward political philosophy consistently – as it is predicated on discrimination and violence against those who belong to the ‘wrong’ religion, the ‘wrong’ race, and the ‘wrong’ color.

Naem’s death will not end resistance in Gaza, as subsequent events have demonstrated. Instead, it would further accentuate the savagery of Israel as a heartless military occupier in the minds of Palestinians, Arabs, Muslims, and anyone who can see through Israeli state-sanctioned lies and propaganda.