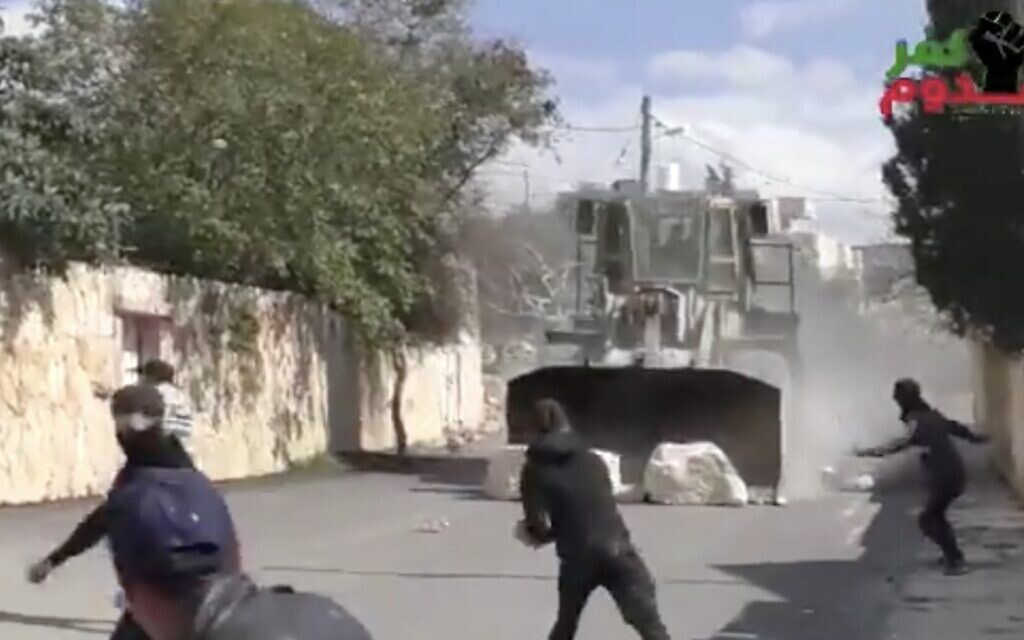 22 Feb 2020 – We ought to thank the driver of the military tractor who went crazy on the streets of Kfar Qaddum the other day, even give him a citation: He drew an amazingly accurate picture of reality for Israelis and the outside world.

Take a look at the video clip that’s been circulating on social media: That’s the occupation. This is what it looks like. This is how it behaves. It’s heavy-handed, violent and unbridled. It’s hard to think of an image that better reflects the situation than this vehicle of steel heading wildly down the streets of a Palestinian village, slamming into a crowd that tries to flee for its life. Never mind the tongue-clucking: This tractor speaks the language of the IDF, more than anything else does. Forget about the coronavirus, this is the real epidemic, with millions of carriers all over Israel.

Qaddum is one of the last of the fighting Palestinian villages. They fight there every day of the week for an exit road that has been blocked because of the settlement of Kedumim. A nine-minute video taken by residents a few days ago shows dozens of angry, brave youths throwing stones at soldiers, who are shooting tear gas at them in a choreography of death. Two children were shot in the head in recent months here. The soldiers shoot, the young people withdraw, and it’s a fight of David’s slings vs. grenade launchers, with Jonathan Pollak on the side of the resistance and bitter cries rising in the background.

And then along comes the tractor. It speeds quickly toward the protesters, the driver sitting high up and protected, he can’t discern whether or not he’s running over people. It doesn’t appear that this bothers him. These aren’t human beings facing him. They’re Palestinians. If anyone were to slip while running away, they’d be crushed to death and the driver wouldn’t feel a thing. Nobody would call it a ramming attack. Terrorism is only committed by Palestinians.

As far as the driver is concerned there’s a flock in front of him that has to be moved. Even animals must not be pushed away in this manner, but this is Qaddum, this is the occupation and this is how it operates. There’s no reason to complain about the driver, there’s no other way to maintain the occupation and subdue the justified resistance that has awoken.

This tractor is not a sophisticated aircraft that’s bombing Gaza or a smart missile that can blast into a bedroom. It’s merely a tractor. A machine intended to destroy homes and clear people off roads. But the driver is no doubt proud of his military service. Someone has to do this work. The guy who used to have that job was called Dubi Kurdi. His real name was Moshe Nissim but the IDF communications system in the Jenin camp gave him the nickname Dubi Kurdi. Oh, the old days, which will return. Kurdi destroyed the camp. For 75 hours he sat in a D-9 bulldozer and, together with his friends, erased 530 refugee homes from the face of the earth. He said he enjoyed every moment, he only regretted he wasn’t permitted to complete his work.

On May 31, 2002, at the height of Operation Defensive Shield, Yedioth Ahronoth published Dubi Kurdi’s account. His tractor’s revenge reflected the spirit of the times. The same spirit exists today. Perhaps he boasted in vain, perhaps he spoke openly – with a Beitar Jerusalem banner across his bulldozer, a bottle of whiskey in the glove compartment and a great song in his heart, Kurdi wanted to flatten a hill and turn the refugee camp into Teddy Stadium. He got some of what he wanted. His unit was awarded a medal.

“For three days I crushed those houses again and again. I didn’t see any people inside as the houses were coming down, but if there had been, I wouldn’t have cared. I’m sure there were people who died inside. But it was hard to see. There was a lot of dust. I got great pleasure seeing every house that went down. Because I knew they don’t care about dying – losing a house hurts them more. Destroy a house and you’ve buried 40 to 50 people for generations to come. I gained a lot of satisfaction from that. I enjoyed it a lot.”

The heritage of the IDF. The other day we saw that it hasn’t changed.