‘Can I Keep You Safe? Your Future Is Uncertain’: Climate and the Fate of Humanity 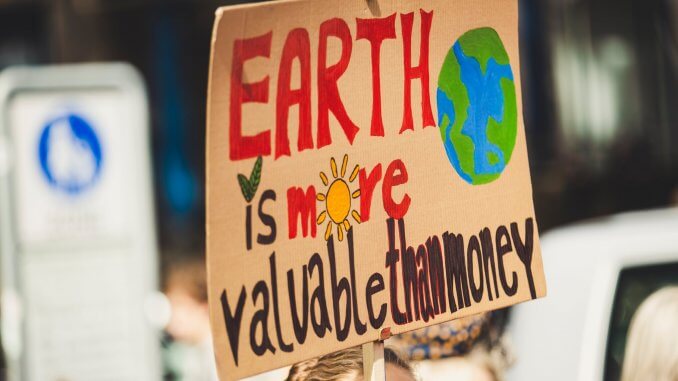 31 Mar 2020 – In the face of the coronavirus pandemic, the most immediate objective is to slow its spread, minimise the death toll and help people through the crisis.  But, despite government promises to support citizens who are now losing their jobs and income, the underlying establishment concern will be as it always has been: to preserve the global inequitable system of wealth and power.

Private interests, including airlines, fossil fuel industries and sinister-sounding ‘businesses crucial to national security’, have been busy lobbying governments for taxfunder-paid bailouts. Notoriously, Richard Branson’s Virgin Atlantic even asked its employees to take eight weeks of unpaid leave, while hundreds of thousands in the UK are struggling to access benefits after becoming unemployed.

Governments are now channelling money into the economy in amounts that have not been seen since the Second World War. However, there have been calls to ensure that public rescue packages should only be agreed if major changes are made to the economy, including significant public ownership of business. There should also be legal and financial consequences for socially irresponsible or criminal corporate behaviour. Surely this all makes sense and would have massive public approval?

So far, the omens are not good. Last week, the US approved a $2 trillion ‘financial stimulus package’ largely intended to prop up the corporate economy. Zach Carter, a senior reporter at HuffPost, warned that:

‘It is not an economic rescue package, but a sentence of unprecedented economic inequality and corporate control over our politics that will resonate for a generation.

‘It represents a transfer of wealth and power to the super rich from the rest of us, with the support of both political parties ― a damning statement about the condition of American democracy.’

In particular, as we will see below, many voices are rightly urging political leaders around the world not to abuse public funds by bailing out corporations that are complicit in climate breakdown. Instead, the priority should be to stimulate the vitally-needed transition to a truly green economy.

‘An Unraveling Of Our Planet’s Entire Life Support Systems’

The previous global economic crisis and financial meltdown of 2007-2009 only led to a temporary dip in carbon emissions. Vested interests moved quickly at that time to ensure that there would be no long-term shift to a low-carbon future.  In the US alone, $700 billion in public money was given as an initial bailout in 2008 to the very banks who were responsible for the crisis. But public funds were funnelled into the financial system for years afterwards, rising to almost $5 trillion by 2015.

Kyla Tienhaara, an environment and economy researcher at Queen’s University, Ontario, notes of oil, gas and coal corporations after the 2008 crash:

‘the fossil fuel lobby ensured that carbon capture and storage projects sucked up a significant amount of green stimulus funds, but not a lot of carbon dioxide.’

With academic understatement, she warns now that:

‘bailouts to the fossil fuel industry and airlines would be monumentally counterproductive.’

Daniel Kammen, a professor of energy at the University of California at Berkeley, uses stronger wording:

‘it would be insane to reflate the fossil economy as it was.’

Basav Sen, who directs the Climate Policy Project at the US-based Institute for Policy Studies, is clear:

‘We’re facing down not just a pandemic and a global economic meltdown, but an unraveling of our planet’s entire life support systems.’

‘A healthy future for oil and gas inevitably means a bleak future for most humans and for ecosystems. At precisely the time that scientists say we should be phasing out oil and gas production, a bailout to this destructive industry is a giant step backwards.’

‘Money has poured into the fossil fuel industry since the Paris agreement [of 2015]. That can’t continue.’

The figures involved are almost beyond comprehension. A new study by an alliance of US-based environmental groups reveals that the world’s largest investment banks have pumped more than £2.2 trillion into climate-wrecking fossil fuels. US bank JP Morgan has been the biggest offender, responsible for over £220 billion in oil, gas and coal projects.

It was economists at JP Morgan who issued a stark warning last month that the climate crisis threatens the very survival of humanity. Inevitably, there was no sign from the investment bank that it would respond with the only obvious sane move: the immediate cessation of all its fossil fuel funding. Instead, the bank was at pains to point out that the alarming study came from a team that was ‘wholly independent from the company as a whole’.

Does anything more clearly sum up the madness of a global economy fuelled by climate-wrecking industry and Big Money? Not even the imminent threat of human extinction is enough to divert the current profit-driven course towards the abyss.

Civilisation’s demise would be the ultimate crash resulting from a deeply unjust corporate-driven global system of finance and economics.  Even now, at this terminally late stage of human existence, BBC News can only tangentially hint at the grim reality, with bland headlines such as:

‘Climate change: The rich are to blame, international study finds’.

‘The rich are primarily to blame for the global climate crisis, a study by the University of Leeds of 86 countries claims.’

‘The wealthiest tenth of people consume about 20 times more energy overall than the bottom ten, wherever they live.’

The researchers warn that:

‘unless there’s a significant policy change, household energy consumption could double from 2011 levels by 2050.’

2050? Three decades away? We simply do not have that much time. The United Nations insisted two years ago that humanity has only until 2030 to make the radical and drastic carbon cuts necessary to prevent merely the worst impacts of global warming.

For obvious reasons, there is no sustained critical reporting in ‘mainstream’ media about the destructive nature of the global system of profit maximisation and endless ‘economic growth’. As we have long observed, you simply cannot expect the corporate media to report the truth about the corporate world.

A core problem for society is that we have been battered by a system of propaganda that tells us repeatedly – or simply takes as a given – that capitalism, despite a few ‘failures’ or ‘flaws’, has been primarily responsible for huge progress in the human condition since the Industrial Revolution. However, as economic anthropologist Jason Hickel correctly observes, we should reject this ‘fairytale’ promulgated by big business, political leaders and state-corporate media.

In reality, it has been people at the bottom of the pile – working for centuries to extend the voting franchise, setting up trade unions, improving healthcare and education – who have been primarily responsible for advancements in living standards. These grassroots factors, says Hickel, ‘are the forces that matter’.

Even Noam Chomsky, the world’s most renowned dissident, only ever appears rarely in the ‘mainstream’ to critique the ruling inequitable economic system and the charade that passes for ‘democracy’. Ideologically correct-thinking editors and journalists in the major news media, selected by a system that rewards obedience to power, are unlikely to offend their employers by promoting ‘extreme’ views like Chomsky’s:

‘What our leaders are good at, and have been very good at for the last 40 years, is pouring money into the pockets of the rich and the corporate executives while everything else crashes.’

Meanwhile, climate scientists continue to wave their arms frantically about climate breakdown, trying in vain to make governments and business divert from their disastrous course towards human extinction. A new study of human-caused emissions of methane from the extraction and use of fossil fuels may have been ‘severely underestimated’. Emissions are likely 25-40 per cent even higher than previously thought.

Inevitably, climate records continue to tumble. Researchers are now warning that the polar ice caps are melting six times faster than in the 1990s:

‘The ice loss from Greenland and Antarctica is tracking the worst-case climate warming scenario set out by the Intergovernmental Panel on Climate Change (IPCC).’

Is it any wonder, after decades of ignored ‘wake-up calls’, that climate scientists are venting their feelings of powerlessness and despair? Joe Duggan, a science communicator at Australian National University, has been running a six-year project collating such responses from climate researchers.

One scientist, Professor Katrin Meissner of the University of New South Wales, Sydney, told Duggan that:

‘I feel powerless and, to a certain extent, guilty. I feel like I have failed my duty as a citizen and as a mother because I was not able to communicate the urgency of the situation well enough to trigger meaningful action in time.

‘What we are doing right now is an uncontrolled, risky experiment with the planet we live on.’

‘So how do I feel? Frustrated, angry that our science is ignored by politicians, scared for my husband [a bushfire fighter] and all the others who are on the frontline fighting these fires and trying to help.

‘But mostly I feel devastated for my son, and his generation, who will have to heal this planet and live with the mass environmental destruction we have caused.’

‘Can I keep you safe? Your future is uncertain. Can I prepare you for that? […] I am brokenhearted. What is a mother if she cannot keep her child safe?’

‘I imagine sometimes what I would like to do to keep you safe in this terrifying world we have created. I imagine an army of compassionate people fully informed of the risks who live freely enough to disrupt the fossil fuel economy. We would hijack the media and create urgent public awareness campaigns…

‘The hardest work, I imagine, would be to create a world that is kinder, less competitive and more equal. Philanthropy and aid are not solutions for the world’s poorest but the symptoms of a broken global economy. My army and I would rage at the injustice of it all, driven forward in the knowledge that these things must be addressed to keep you safe.’

‘We are at a cross-roads now. You have two futures and I am powerless to influence which finds you.’

As individuals, it may sometimes feel that we are powerless. But the brighter, safer, saner future can still be attained, if we remember that together we have more power than the destructive forces driving us towards extinction.