Coronavirus: Trump’s WHO De-funding ‘as Dangerous as It Sounds’

15 Apr 2020 – US President Donald Trump has been heavily criticised for halting funding for the World Health Organization (WHO) amid the global coronavirus pandemic.

Philanthropist Bill Gates, a major funder of the WHO, said it was “as dangerous as it sounds”.

President Trump said on Tuesday that the body had “failed in its basic duty” in its response to coronavirus.

The head of the WHO said it was reviewing the cuts’ impact “to ensure our work continues uninterrupted”.

“We regret the decision of the President of the United States to order a halt in the funding to the WHO,” Director-General Tedros Adhanom Ghebreyesus said at a press conference, adding that the US has been “a long-standing and generous friend… and we hope it will continue to be so”.

Earlier on Twitter he said the agency’s “singular focus” was to stop the outbreak.

UN Secretary General António Guterres said it was “not the time” to cut funds to the WHO, which “is absolutely critical to the world’s efforts to win the war against Covid-19”.

Mr Trump has accused the WHO of making deadly mistakes and overly trusting China.

“I am directing my administration to halt funding while a review is conducted to assess the World Health Organization’s role in severely mismanaging and covering up the spread of the coronavirus,” Mr Trump told reporters on Tuesday.

A White House statement on Wednesday said the agency had “failed” the US people.

“The American people deserve better from the WHO, and no more funding will be provided until its mismanagement, cover-ups and failures can be investigated,” it read. 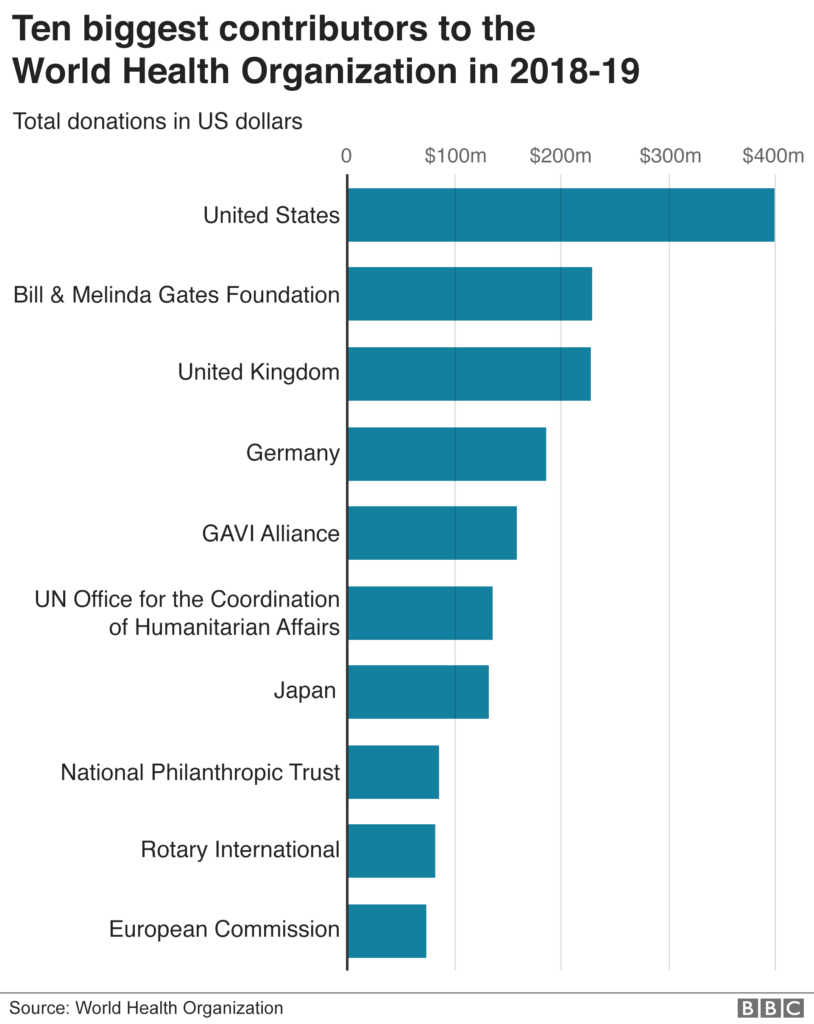 Mr Trump has been under fire for his own handling of the pandemic. He has sought to deflect persistent criticism that he acted too slowly to stop the virus’s spread by pointing to his decision in late January to place restrictions on travel from China.

He has accused the WHO of having “criticised” that decision, an apparent reference to general advice from the agency against travel restrictions.

The US is the global health body’s largest single funder and gave it more than $400m in 2019. The Bill and Melinda Gates Foundation, which is funding Covid-19 treatment and vaccine research, is the second-largest funder.

Halting funding for the World Health Organization during a world health crisis is as dangerous as it sounds. Their work is slowing the spread of COVID-19 and if that work is stopped no other organization can replace them. The world needs @WHO now more than ever.

A decision on whether the US resumes funding will be made after the review, which Mr Trump said would last 60 to 90 days.

What is Donald Trump’s argument?

The US has by far the highest number of coronavirus cases and deaths worldwide – with more than 600,000 cases and 26,000 deaths.

Mr Trump accused the WHO of having failed to adequately assess the outbreak when it first emerged in the city of Wuhan, losing precious time.

“Had the WHO done its job to get medical experts into China to objectively assess the situation on the ground and to call out China’s lack of transparency, the outbreak could have been contained at its source with very little death,” he told reporters.

“This would have saved thousands of lives and avoided worldwide economic damage. Instead, the WHO willingly took China’s assurances to face value… and defended the actions of the Chinese government.”

What is the WHO – and who funds it?

Chinese officials initially covered up the outbreak of the virus in Wuhan, and punished whistleblowers who tried to raise the alarm. Beijing later imposed draconian restrictions, including quarantine zones on an unprecedented scale, drawing effusive praise from the WHO and Mr Tedros.

But WHO experts were only allowed to visit China and investigate the outbreak on 10 February, by which time the country had more than 40,000 cases.

White House reporters pointed out, however, that Mr Trump himself had praised China’s response to the outbreak and downplayed the danger of the virus at home long after the WHO had declared a “public health emergency of international concern”.

China has been working very hard to contain the Coronavirus. The United States greatly appreciates their efforts and transparency. It will all work out well. In particular, on behalf of the American People, I want to thank President Xi!

Why has the WHO faced criticism?

It is not the first time the WHO’s response to the outbreak has come under scrutiny.

On 14 January, the organisation tweeted that preliminary Chinese investigations had found “no clear evidence of human-to-human transmission” of the new virus.

Mr Trump and others have used the tweet to attack the WHO for simply believing China, despite evidence to the contrary. But about a week after that tweet, on 22 January, the agency released a public statement saying that human-to-human transmission did appear to be taking place in Wuhan.

At the end of January, on the same day it declared a public health emergency, the WHO said that travel restrictions were not needed to stop the spread of Covid-19 – advice that was eventually ignored by most countries, including by the Trump administration the next day.

In March, the UN agency was also accused of being unduly influenced by China after a senior official refused to discuss Taiwan’s response to the outbreak.

Meanwhile, some health experts also say that the WHO’s guidance on face masks has led to public confusion.

Other frequently-made criticisms of the WHO more generally are that it is constrained by politics and a sprawling bureaucracy. It came under particular fire for its response to the 2014-16 Ebola outbreak in West Africa and how long it took to declare a public health emergency, leading the organisation to announce reforms in response.

One Response to “Coronavirus: Trump’s WHO De-funding ‘as Dangerous as It Sounds’”