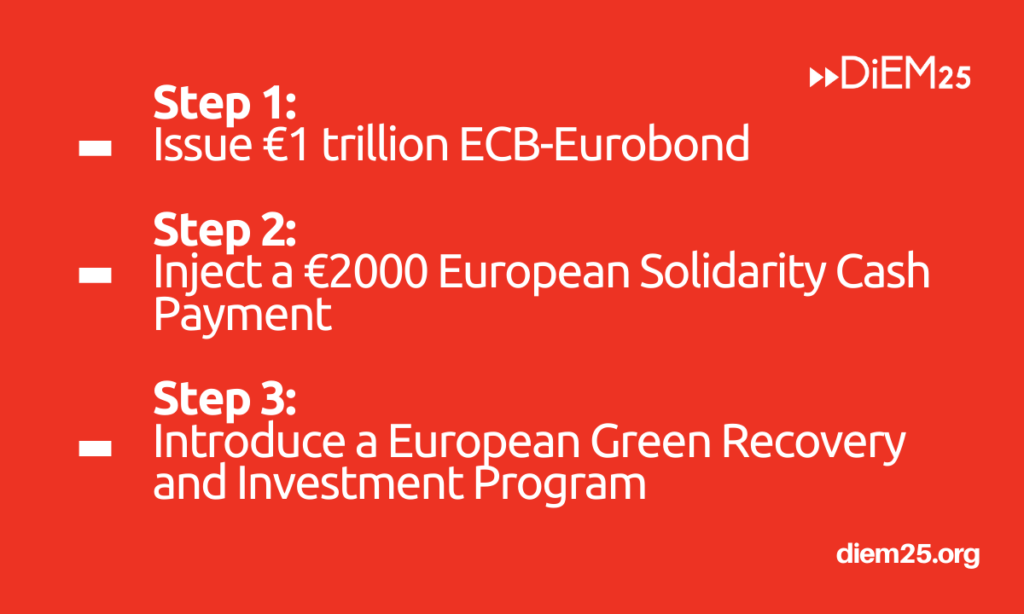 Introduction: Lives, Livelihoods and the Union on the brink

The COVID-19 pandemic is the greatest test of the European project in the history of the Union — and we are failing.

Solidarity was meant to be a foundational principle of the EU. But solidarity is missing at the moment it is most needed.

COVID-19 has revealed a fundamental truth: Europe is only as healthy as its sickest resident, only as prosperous as its most bankrupted.

The price of this failure will not merely be lives lost and livelihoods destroyed. It will be the disintegration of the Union itself.

In line with its Green New Deal for Europe, DiEM25 offers a 3-point plan to protect all European residents, avert an economic depression, and prevent the collapse the Union.

Our plan is premised on four basic facts.

Those calling for a Eurobond are right: it is the only way the rise in public debt can be shouldered without breaking the Union. The question is: Who should issue it? And, who should back it.

Europe has three institutions that could issue the much-needed Eurobond: The European Stability Mechanism (ESM). The European Investment Bank (EIB). And the European Central Bank (ECB). However, two of these institutions are ill-suited to the urgent task at hand.

We are left with the ECB: The only EU institution able to issue non-synthetic, therapeutic Eurobonds.

In view of the above, DiEM25 proposes that:

The ECB issues a long-maturity, 30-year, Eurobond for €1 trillion euros solely backed by the ECB, with the possibility of further issuance in needs be.

The €1 trillion collected by the ECB will then be used to replace national debt, in proportion to the coronavirus-induced national recessions & public health costs.

Given the three-decade maturity of these ECB-Eurobonds, the EU will have three decades to decide how to reimburse its central bank. DiEM25 believes that only a democratically elected federal government in Europe can make these decisions. Without it, the ECB’s emergency measures only deepen Europe’s democratic deficit, threatening the survival of the Union all over again.

Step 2: The ECB must inject a €2000 European Solidarity Cash Payment to every European resident

Countless Europeans are currently locked up without a capacity to earn. They need cash immediately, not loans or benefits that involve excessive bureaucracy.

For this reason, we call upon the ECB to fund immediately Europe’s commercial banks with €2000 per European citizen to be credited directly into their account.

As for the unbanked, the ECB must provide cash to one bank per member-state that issues numbered, anonymous debit cards to be disbursed by local and national authorities to all residents without bank accounts.

When Europe’s lockdown ends, entire industries will be facing bankruptcy, in desperate need of re-investment and re-orientation.

Europe cannot afford to waste this crisis as it did the last.

The euro crisis left Europe with a lower green growth potential and with less capacity to compete with China and the United States on the technologies of the future. We cannot afford to respond to this crisis with more austerity, stronger divergence, less investment, and a dearth of quality jobs.

DiEM25 proposes that the European Council:

Conclusion: Europe will unify or it will perish.

The creation of the euro set the EU on a forked path that led either to unification or disintegration. No third endpoint ever existed.

The euro crisis was put on ice, but never cured, by the interventions of the ECB. But the COVID-19 emergency now makes it impossible for the euro crisis to remain frozen.

The EU will either unify to confront this unprecedented crisis, or it will perish.

DiEM25’s 3-Point Action Plan offers the only path toward unification. The three policies we propose are immediately implementable and consistent with the letter of the EU Treaties.

Once DiEM25’s 3-Point Action Plan is implemented, Europe will have a chance to become a genuine, democratic Union. The only other option is disintegration.

DiEM25 is a pan-European, cross-border movement of democrats. We believe that the European Union is disintegrating. Europeans are losing their faith in the possibility of European solutions to European problems. At the same time as faith in the EU is waning, we see a rise of misanthropy, xenophobia and toxic nationalism. If this development is not stopped, we fear a return to the 1930s. That is why we have come together despite our diverse political traditions – Green, radical left, liberal – in order to repair the EU. The EU needs to become a realm of shared prosperity, peace and solidarity for all Europeans. We must act quickly, before the EU disintegrates.