10 Apr 2020 – Crazy times! As we move through this time of health and economic crisis I find myself reflecting on the importance and power of language. Trump recently said of the fight to deal with COVID19 that it is “our big war… It’s a medical war. We have to win this war. It’s very important.” And yet, this sort of rhetoric is nothing new. Presidents have long declared wars – J Edgar Hoover on crime, Lyndon Johnson on poverty, Richard Nixon on drugs, and now Trump’s war on a virus. We know how well how those previous “wars” have gone.

And now we face a crisis that is harming people and devastating our economy, while we would have been far better prepared to protect lives had we invested proactively in public health programs. President Trump is not the first president to cut funding for critical public health programs intended to deal with the very situation we now face. And the underlying reason for this lack of focus on real, human security is the iron grip of the National Security State.

Dr. Cornel West once said, “If only the war on poverty was a real war then we would actually be putting money into it.” The National Security State pours countless billions into the business of war (and it is big business), carefully developing enemies with which to justify such spending while minimizing, or in many cases ignoring, issues like pandemics that are of very real concern and consequence to our nation and all of humanity. And then, when a crisis occurs, that same State wrings its hands, points fingers, and spends a bunch of money (until things quiet down), while continuing to spend as usual on the war machine. 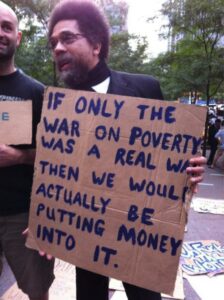 While the planet’s temperature continues to increase, and we continue squeezing out the last of the Earth’s fossil fuel reserves and other precious resources, we continue creating enemies to justify our huge military expenditures and war preparations, including those for nuclear war. Whether Korea, Iran, China or Russia, each of these nations is trumpeted as justification for the need to build up our nuclear capabilities.

And then came the Coronavirus! While global military spending ran $1.8 trillion in 2018 (with the US spending nearly as much as the next eight largest-spending countries combined) it only took a tiny infective agent roughly one-two-hundredth the diameter of a human hair, which can multiply only within the living cells of a host, to bring our nation to a grinding halt.

We should be humbled and re-evaluating our priorities as a nation and as a human family. Yet, the apparatus of the state is so automated, so programmed for its own survival – rather than for the survival and well-being of its people who, quite ironically, are the ones needed to keep the state functioning – that it is unable to be truly introspective. If the State was truly invested in its citizens, it would be listening to the experts who have previously presented sound arguments for preparing for pandemics, and it would have spent our tax dollars wisely and in full preparation for such an event.

We are led to believe that the enemy is everywhere, lurking in the shadows, preparing to strike should we be ill-prepared, just like the bad old days of the Cold War and the Communist menace. Of course, we are grossly overprepared, bankrupting ourselves in the process – economically and morally. In reality we have manufactured each enemy in due course in a carefully crafted narrative generated by Think Tanks and experts with the experience of the Military-Industrial Complex’s revolving door.

We need to step back and ponder the significance of unfolding events, find humility, and reconsider our direction as a nation. As much as we are hugely overfunded and overprepared militarily, we are grossly underprepared in every way to deal with real, human needs. The coronavirus debacle in our nation is a glaring example of that.

A pandemic is a deadly as war, yet the resources committed to pandemic prevention and response are a fraction of the resources we commit to military expenditures. A 2016 report by the Commission on a Global Health Risk Framework for the Future estimates that an incremental global investment of $4.5 billion per year would strengthen national public health systems; fund research and development; and finance global coordination and contingency efforts.

Rather than continuing to pour billions of dollars into nuclear weapons, wouldn’t it make more sense for the nuclear-armed nations to realize the folly of their continuing preparations for nuclear war? Isn’t it time for a paradigm shift? And who will initiate such a shift? Shouldn’t the only nation to have used nuclear weapons against another be the one to initiate such an effort, working with Russia to lead the other nuclear-armed nations to the table?

It should be clear to us that it is time to move beyond discussions of “no first use” and “presidential authority” to “moving swiftly to zero”. This will require not only a paradigm shift, but a president who will build a working relationship with Russia, supporting the rule of international law in supporting existing nuclear-weapons treaties, including the Treaty on the Prohibition of Nuclear Weapons, and dramatically reducing the role of nuclear weapons in our foreign policy to send a clear message to other nations of our intentions.

Above all, we must stop building new nuclear weapons and delivery systems that only ensure humanity’s ultimate demise! A nuclear war will be the last war!

Perhaps a recent news item from Fox News sums up the madness of our nation’s serial militarism. The commander of U.S. nuclear forces recently said that the coronavirus outbreak has had “no impact” on his ability to launch nuclear weapons. Are we supposed to find comfort in that statement in this time of existential angst?

Where is the logic in preparing for global health pandemics while simultaneously preparing for the ultimate pandemic of nuclear omnicide? Do we want the false security of national security or do we want real, human security. Do we want to care for each other at home and around the globe, the human family, understanding the deep interconnections of all life on Earth?

As long as our elected leaders in Washington, D.C. abdicate their responsibilities, it will be up to us as We The People to take responsibility and demand a new paradigm – one that puts human security above national security, one that seeks nonviolent and non-military solutions to conflict, and one that puts the needs of the people above the wants of powerful corporations. Only through such a paradigm shift can we build a safer and more secure nation and world for all people. And isn’t such a goal priceless?

Leonard Eiger is an activist and coordinates communications and outreach for Ground Zero Center for Nonviolent Action (gzcenter.org). Ground Zero offers the opportunity to explore the meaning and practice of nonviolence, while witnessing to and resisting all nuclear weapons. The US Navy’s Trident ballistic missile submarine base, adjacent to Ground Zero, represents the largest deployed concentration of nuclear weapons in the United States.

Anticopyright: Editorials and articles originated on TMS may be freely reprinted, disseminated, translated and used as background material, provided an acknowledgement and link to the source, TMS: National Security or Human Security?, is included. Thank you.