NATO in Arms to “Fight Coronavirus” 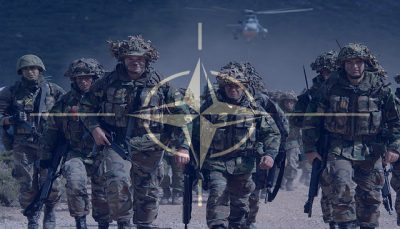 7 Apr 2020 – He is the same general who declared in the United States Senate on February 25 “nuclear forces are supporting every US military operation in Europe” and ” I am a fan of a flexible first-use policy” of nuclear weapons, that is nuclear attack by surprise (“Dr. Strangelove  takes care of our health”, Il manifesto, March 24).

General Wolters is the supreme commander of NATO as head of the United States European Command. He is therefore part of the Pentagon’s chain of command, which has absolute priority. Its strict rules are confirmed by a recent episode: the aircraft carrier Roosevelt commander, Brett Crozier, was removed from command because he violated military secrecy by urging aid sending, faced with the spread of the coronavirus on board.

Fast-track paths are also used by the US strategic bombers B2-Spirit for nuclear attack: on March 20, they took off from Fairford in England, together with Norwegian F-16 fighters, they flew to the Arctic towards Russian territory. In this way – General Basham, deputy commander of the US Air Force in Europe – explains “we can promptly and effectively respond to threats in the region, demonstrating our determination to bring our fighting power everywhere in the world”.

While NATO is committed to “fighting coronavirus” in Europe, two of the major European Allies, France and Great Britain, sent their warships to the Caribbean.

The amphibious assault ship Dixmund sailed on April 3 from Toulon to French Guiana for what President Macron calls “an unprecedented military operation“. called “Resilience“, in the framework of the “war to coronavirus“.

Dixmund can perform the secondary function of hospital ship with 69 beds and 7 for intensive care. The primary role of this large ship, 200 m long and with a flight deck of 5000 m2, is that of amphibious assault: approaching the enemy coast, it attacks with dozens of helicopters and landing crafts transporting troops and armored vehicles.

Similar characteristics, albeit on a smaller scale, has the British ship RFA Argus, which sailed on April 2 to British Guyana.

The two European ships will take position in the same Caribbean waters near Venezuela, where the war fleet is arriving – with the most modern coastal combat ships (also built by Italian Leonardo Company for US Navy) and thousands of marines – sent by President Trump officially to stop drug trafficking.

He accuses Venezuelan President Maduro of “taking advantage of the coronavirus crisis to increase the drug trafficking, he finances his narco-state with“. The purpose of the operation, supported by NATO, is to strengthen the embargo tightening to economically strangle Venezuela (a country with the largest oil reserves in the world), whose situation is aggravated by the coronavirus that has started to spread.

The aim is to depose regularly elected President Maduro (on whose head the US has placed a $ 15 million bounty) and to establish a government that will bring the country into the sphere of US domination. It cannot be excluded that an incident could be caused as a pretext for the invasion of Venezuela. The coronavirus crisis creates favorable international conditions for an operation of this type, perhaps presented as “humanitarian“.

One Response to “NATO in Arms to “Fight Coronavirus””