Why the West Hates Sandinista Nicaragua 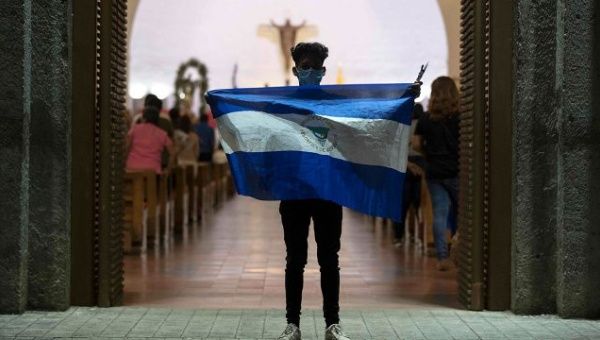 In Nicaragua’s case, Western media and NGOs have comprehensively distorted and repeatedly lied about the country’s extraordinary achievement of containing the COVID-19 pandemic. As of 20 Apr 2020, there were 10 confirmed cases and two deaths in a population of 6.5 million.

20 Apr 2020 – Nicaragua’s success in containing the COVID-19 virus makes the failure of the U.S. and its allied countries look pathetic. The country’s low numbers of nine confirmed cases to date and just two fatalities categorically vindicate the policies of its Sandinista government led by President Daniel Ortega and Vice President Rosario Murillo.

The same is true of other revolutionary and socialist governments around the world. Cuba has given a shining example of global leadership and solidarity. Most notably elsewhere Venezuela, Vietnam and India’s state of Kerala have also implemented diverse but successful policies containing the pandemic.

But in North America and Europe, the success in addressing COVID-19 of these impoverished socialist countries, even when under attack from the U.S. and the European Union, like Cuba, Nicaragua, and Venezuela, has been suppressed.

Related: Nicaragua and the COVID-19 Pandemic

In Nicaragua’s case, Western media and NGOs have comprehensively distorted and repeatedly lied about the country’s Sandinista government’s extraordinary achievement in comparison with other countries in the region, let alone the damning contrast with the catastrophic situation in North America and Western Europe. Many reasons contribute to that reality, both contemporary and historical.

However, one reason is fundamental. The Western liberals and progressives who generally control information and communications in North America and Europe cannot acknowledge the success of Nicaragua’s Sandinista government without conceding their own monstrous cynicism and hypocrisy.

In general, ever since the dissolution of the Soviet Union, they have effectively colluded with corporate capitalism and its neoliberal political sales team. At best, they have beseeched minor tweaks and adjustments to the worst capitalist excesses in their own countries to mitigate somewhat all the injustice and suffering at home.

But overseas they have colluded in coups, wars and genocidal sanctions targeting peoples with independent governments. They have effectively abandoned victims of their allies, like the Palestinians or vulnerable populations in the Congo.

Western liberals and progressives in communications media and NGOs could hardly be more comfortable with the fascist union of corporate and State power currently controlling the U.S., Canada, and the European Union. So it has been perfectly natural for these Western liberals and progressives effectively to support, for example, nazi inspired extremists in Ukraine, fanatical pseudo-religious terrorists in Libya and Syria and the extreme right-wing and allied forces in Venezuela and Nicaragua.

One of the effects of that support is that there’s no going back. Nicaragua’s success in addressing the COIVD-19 pandemic is irrefutable. But Western liberals and progressives cannot admit that because doing so would contradict the lies and fabrications of the right-wing and allied forces they support.

US Imperialism in Nicaragua and the Making of Sandino

Finally admitting that their right-wing allies are lying frauds would mean radically questioning their version of the violent failed coup attempt of 2018 or the absurd claim ever since President Ortega took office in 2007 that Nicaragua is a dictatorship. Nicaragua is just one example of how Western liberals and progressives find themselves suffocating in a miasma of thoughtless prejudice, moral cowardice, and cynical hypocrisy, making an honest appraisal of their own moral and political contradictions impossible.

That is largely why the next U.S. President will be yet another demented bellicose tool of the U.S. plutocracy and why the European Union will survive ever more clearly as a similarly dysfunctional tool of U.S. and European oligarchs. Hope that the current crisis will lead to a safer, a more humane multipolar world is almost certainly misplaced.

Daniel Ortega’s recent call for better health care instead of more military spending, for a focus on human solidarity rather than capitalist greed, is unanswerable. His government’s patient, practical, prudent but also brilliant example in this crisis is irrefutable. That is why the Western ruling elites and the politicians, media, and NGOs they own have responded with yet more lies, falsehoods, evasions, and threats. They all hate Sandinista Nicaragua because they cannot stand so much Truth and Light.