COVID-19: Cuba’s People-before-Profit Approach Pays Off as Capitalism Proves a Bitter Pill for the US 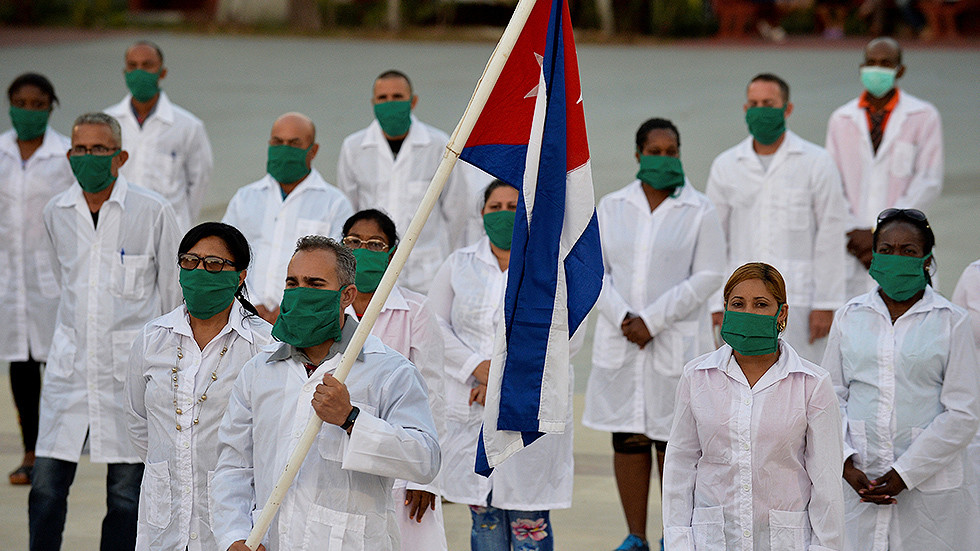 Doctors and nurses of Cuba’s Henry Reeve International Medical Brigade take part in a farewell ceremony before traveling to Andorra to help in the fight against the coronavirus COVID-19 pandemic, at the Central Unit of Medical Cooperation in Havana, on March 28, 2020. © AFP / YAMIL LAGE

28 Apr 2020 – Havana has punched above its weight for decades when it comes to health. But never have the differences between its socialist system and the market-based system of its strongest detractor, America, been so apparent.

Even before it reported novel coronavirus cases of its own in March, Cuba’s fingerprints were all over the efforts to stem the global pandemic, from China’s use of antivirals developed on the island to treat the infected, to the docking of a British cruise ship in Havana in order to allow the 1,000 people on board – including five Covid-19 carriers – to return home.

The MS Braemar, filled mostly with British citizens, was refused permission to disembark at several ports it approached. According to some reports, the US – a principal British ally – was one of the countries that turned it down. The ship’s operator, Fred. Olsen Cruise Lines, has not commented on the US specifically, saying they explored a number of options and would not disclose the details of those negotiations. The fact that the vessel ultimately found refuge on Cuba’s shores serves to illustrate the difference in approaches to this pandemic.

Despite considerable risk factors, including a high percentage of people over the age of 60 and a high number of visitors to the country, Cuba has been able to keep Covid-19 cases to just under 1,370 as of April 27, with just 54 deaths.

This is largely due to the fact that the Caribbean island not only has the highest ratio of doctors to population in the world, but also a free, universal health system based on proactive, community response.

The country’s socialist government has been tempered by decades of crisis management – from the devastating Special Period of the 1990s to the almost annual mobilization for hurricane season – and quickly responded to minimize damage and, most importantly, loss of life.

The measures that began in January included training and preparation for medical professionals and facilities, but by March these extended into other sectors and included a virtual shutdown of the tourism industry – a huge chunk of Cuba’s economy.

Still, authorities maintained that Cuban doctors would continue to go to countries that needed support in controlling the spread of the virus. These same medical brigades were instrumental in supporting African nations in curbing and controlling the Ebola outbreak that began in 2014.

But now, for the first time, Cuban doctors have been received with open arms in European countries like Italy and Andorra, and they have even been welcomed back by some of the very same US-allied governments in Latin America that vilified and kicked them out just months ago.

The number of Cuban-trained doctors working in other countries is even higher when you count the graduates from Havana’s Latin American School of Medicine, which has provided free education to 35,000 doctors in 138 countries since 1999.

All of this has been accomplished under the severe limitations and resources that are the intentional consequence of barbaric US sanctions, which were recently intensified by the Trump administration.

Exporting its doctors and nurses abroad is a vital revenue-earner for Cuba. It brings in around $11 billion each year – a bigger source of income than the island’s tourism industry. At any one time, there are around 50,000 Cuban doctors working across 67 countries, an ‘army of white coats’, as officials describe them.

But while Cubans have put themselves in harm’s way to support people and countries all over the planet, the US has been doing the exact opposite.

In an audacious demonstration of hypocrisy, Washington has pressured countries to not accept Cuban doctors, while offering little support of its own, and has also deliberately (and perhaps illegally) seized shipments of medical equipment meant for other countries, including some of its closest allies.

#Cuba offers its international medical missions to those afflicted with #COVIDー19 only to make up the money it lost when countries stopped participating in the abusive program. Host countries seeking Cuba’s help for #COVIDー19 should scrutinize agreements and end labor abuses.

To be fair, even if it had the will, the US government is not in a position to lend much support to anyone at the moment.

The weaknesses of America’s health system, which paradoxically has the highest per capita funding in the world by far, were laid bare even before the pandemic, as Democratic presidential hopefuls outlined their plans to provide adequate healthcare to the more than 70 million Americans who lack it.

Just a few weeks into this crisis, the picture is even bleaker, with millions more losing access due to job losses, and hospitals lacking proper equipment for patients and staff.

After weeks of New York splitting and sharing ventilators, Trump proclaims: "We are now the king of ventilators… We have handled the situation tremendously well."

This NYT story is from March 26: ‘The Other Option Is Death’ https://t.co/E4ZPkfxS2d

Holy freaking hell. A nursing manager at Mt Sinai Hospital in NYC just died from coronavirus. Nurses at the hospital have been wearing trash bags because of the lack of protective gear. https://t.co/DSkHKVECmE pic.twitter.com/gl3w7ksPog

To make matters worse, the discrepancy in measures at the state and local level demonstrate that the country’s overall response is nothing less than schizophrenic. Meanwhile, decisions from the White House – including having tapped a dog breeder to lead the pandemic response and suggesting people inject disinfectant – have become increasingly indiscernible from satire. It’s like ‘Tiger King’, but on healthcare.

In this tragic and farcical situation, the differences between the healthcare systems and approaches in the US and Cuba have become more apparent.

Cuba has long prioritized healthcare as a right that all people should have, while America believes that the market should dictate who has access and who doesn’t. Cuba has exported its doctors across the globe to help stem the pandemic’s tide, while the US has tightened the stranglehold on the island in a futile attempt to stop it from doing so.

The schism between the two is less a matter of money than a matter of philosophy. Cuba, for all its shortcomings, has maintained an indomitable commitment to the health and lives of people, and it has been vindicated during this pandemic.

Meanwhile, its wealthy neighbor to the north sinks deeper into a death spiral, intent on proving the superiority of the capitalist orthodoxy its government wants applied to every sphere of life, in every part of the planet.

Pablo Vivanco is a journalist and analyst specializing in politics and history of the Americas who served as the Director of teleSUR English. Recent bylines include The Jacobin, Asia Times, The Progressive and Truthout.