US Withdraws from Open Skies Treaty, Heightening Danger of War with Russia

22 May 2020 – Yesterday the Trump White House announced it will unilaterally withdraw from the Open Skies Treaty, which permits participating states to conduct limited, unarmed reconnaissance flights over the territories of other member states in order to collect data on military forces and activities. The scrapping of Open Skies heightens the likelihood of a major conflict between the United States, Russia and the major European powers.

The treaty, signed in 1992 after the dissolution of the USSR, has been in full force since 2002. It has been ratified by 34 states, including almost all NATO and EU members, Russia and most countries of the former Soviet Union. The US withdrawal from Open Skies, which will take effect within six months, comes amidst growing tensions with Russia. In June, Washington and its NATO allies will stage major war games just 35 miles from Kaliningrad, a Russian enclave in Europe.

Russian media report that NATO is convening an extraordinary session on Friday, May 22, to discuss the situation. 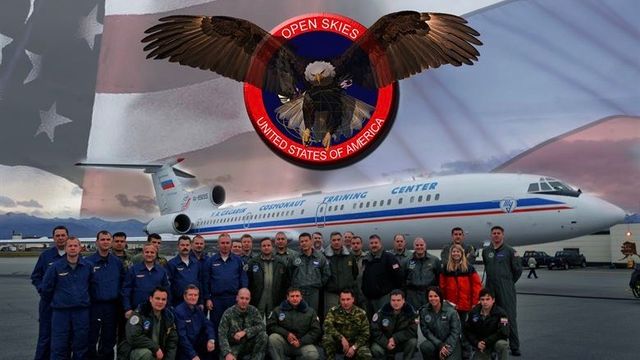 Trump’s move is universally seen as a sign that the US will also soon end the 2010 New START treaty with Russia, which limits the number of deployable nuclear missiles to 1,550 for each country. It is the last remaining treaty constraining the arsenal of the world’s two largest nuclear powers.

The American withdrawal from the Open Skies Treaty means that Russia and other member states can no longer conduct observational flights over the US that provide information, among other things, about the growing nuclear capabilities of the US. Washington will no longer provide advance notice to other states before it conducts surveillance flights or limit its activities to dictates established by the treaty.

The White House argues that the US withdrawal is justified by Russia’s alleged “violation” of the treaty. “Russia didn’t adhere to the treaty. So until they adhere, we will pull out, but there’s a very good chance we’ll make a new agreement or do something to put that agreement back together,” Trump said at a press briefing on Thursday.

The alleged violations refer to the fact that Russia has excluded Kaliningrad, a small piece of Russian territory that abuts Poland and Lithuania, and the Georgian breakaway republics of Ossetia and South Abkhazia in the south Caucasus, from the treaty. Moscow does not allow Open Skies surveillance of these areas. In 2008, Georgia provoked a war with Russia over Ossetia and South Abkhazia with the full backing of the US, bringing NATO and Russia to the brink of all-out war.

Russian deputy foreign minister Alexander Grushko sharply criticized Washington’s withdrawal from Open Skies. “Our position is absolutely clear and is invariable: The withdrawal of the US from this treaty will come as yet another blow to the system of military security in Europe, which is already weakened by the previous moves by the administration.”

Indicating that Russia might now also withdraw from the treaty, the spokesperson for the Russian foreign ministry, Maria Zakharova, declared on Thursday that the US itself violated the treaty.

Since 2002, the US has undertaken three times as many reconnaissance flights over Russia than Russia has over the US. In 2019, Washington conducted 18 flights out of a maximum allowed of 21, whereas Moscow carried out 7. In 2020, the US is expected to reach the upper limit of 21.

Europe has been the primary target of Russian surveillance under Open Skies, with Moscow using the treaty provisions to observe the movement of NATO troops and the build-up of American military capabilities on the continent. Particularly since the 2014 crisis in Ukraine, when Washington and Brussels supported a far-right, anti-Russian coup in Kiev, the Western allies have staged ever larger and more provocative military exercises in the region.

If Russia withdraws from the treaty, it will no longer be able to continue its overflights in Europe. European signatories would also be legally prohibited from carrying out such missions over Russia.

The Trump administration first signaled its intention to withdraw from the treaty in November 2019. At that time, Konstantin Bogdanov of the Russian Academy of Sciences’ Center for International Security warned, “There is nothing to replace it with. ‘Open Skies’ is an important, symbolic treaty which has enormous political significance.”

Europe’s imperialist powers and NATO members have long opposed an American withdrawal from the treaty. Ukraine, whose eastern Donbass region is engulfed in a conflict between pro-Ukrainian and pro-Russian separatists, has also opposed the scrapping of Open Skies.

On May 12, the European Leadership Network think tank published an open letter signed by several high-ranking NATO ex-generals that called upon the Trump administration to continue complying with Open Skies. It further appealed to the European powers to “make every effort to remain in the treaty, even if the United States withdraws.” The letter, whose signatories included former military chiefs from Germany, Ukraine, the UK, France and Italy, declared that “while the intelligence and confidence building advantages are limited for the US itself, they are very real for America’s NATO allies.”

German Foreign Minister Heiko Maas criticized the American withdrawal of the treaty and urged the US government to “reconsider.” He said, “We are calling upon Russia to resume full obligations under the treaty. For us it is clear that we will continue to implement the treaty and that we will do everything to maintain it.”

The European powers, which have played a central role in staging major NATO exercises on Russia’s borders in recent years, are interested in keeping the treaty because it enables them to gather military intelligence using air surveillance. The US, by contrast, has more advanced satellite capabilities than the European powers.

While utterly reckless, the unilateral withdrawal from the treaty is part of systematic preparations by US imperialism for world war. Since 2018, Washington has officially based its military policy on the prospect of a “great power conflict,” above all with Russia and China.

In 2017, the US pulled out of the Iran nuclear deal, exacerbating tensions with Germany and France and setting the stage for an open military conflict with Tehran. Last summer, the US scrapped the Intermediate-range Nuclear Forces (INF) deal, a clear signal that it was preparing for nuclear war. And in 2019, Democrats and Republicans voted for a $750 billion military budget—the largest in history—which explicitly rejected any kind of limitations on the development of “low-yield” nuclear weapons. Other imperialist powers, most notably Germany, have stepped up their military rearmament.