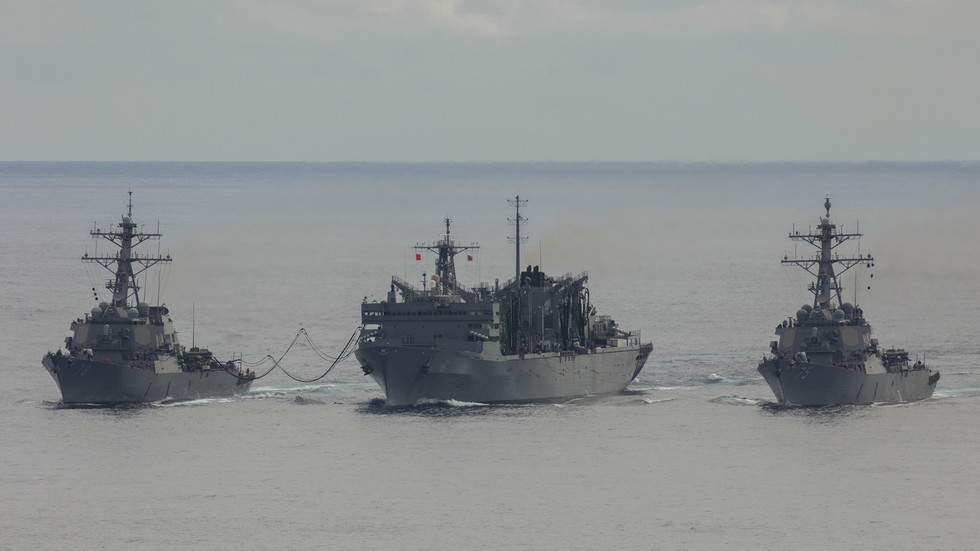 5 May 2020 – Millions of Americans and Britons losing their livelihoods under Covid-19 lockdowns can rejoice that their navies are open for business, staging a show of force on Russia’s doorstep for the first time since the Cold War.

Three guided missile destroyers and a Royal Navy frigate sailed into the Barents Sea yesterday, to

“assert freedom of navigation and demonstrate seamless integration among allies,”

according to the US 6th Fleet. The announcement was accompanied by hashtags such as #openforbusiness, #Powerforpeace and #strongertogether.

“In these challenging times, it is more important than ever that we maintain our steady drumbeat of operations across the European theater,”

“to promoting regional security and stability, while building trust and reinforcing a foundation of Arctic readiness,” according to Franchetti.

The fleet also made a point of reminding everyone that the last time NATO ships ventured into the Barents Sea was the 1980s, at the height of the Cold War between the US-led bloc and the long-gone Soviet Union. For some reason, the British and American naval planners thought the Covid-19 pandemic was the perfect time to bring back those good old days and poke the bear a bit.

The Barents Sea is Russia’s equivalent of the Gulf of Mexico to the US, sitting between its major Arctic ports and the North Pole. With the Arctic looming large in strategic plans of both Moscow and Washington – remember the moves to “buy” Greenland from Denmark? – the five ships’ saunter through the icy waters is about far more than remaining

“proficient in all operating environments to ensure the continued security and access to the seas,” as the 6th Fleet puts it.

Yet the exercise has not involved any ships from the Royal Norwegian Navy, one of the few NATO navies actually proficient in Arctic operations. The Norwegians appear to be wary of needlessly antagonizing Russia. While Oslo is normally very vocal about taking part in NATO exercises, “this time it was not prioritized,” Defense Minister Frank Bakke-Jensen told the Barents Observer.

Russia's Northern Fleet assets monitor the situation as a group of U.S. Navy surface ships sail the #BarentsSea for the first time since the mid-1980s. https://t.co/Z0RoKLQVMg

The US Navy routinely makes a point of sending its ships to places like the South China Sea for “freedom of navigation” operations (FONOP) – meaning, their freedom to go wherever they please. Two US ships played a game of nerves with the Chinese navy just last week. The Barents Sea operation seems to be designed along the same lines. It also involves two ships that have a lot of experience in poking Russia – and getting poked back in return.

The Porter has repeatedly sailed into the Black Sea over the past several years, where it was shadowed by Russian vessels and aircraft. The Donald Cook was famously buzzed by Russian jets in the Baltic sea in 2016, causing the Pentagon to complain about “aggressive” and “unsafe” approaches.

Both destroyers are normally based in Rota, Spain, where the weather on the worst of days is nowhere near as harsh as in the Arctic.

Admiral Franchetti’s comments about the importance of maintaining operations suggest that the US Navy is eager to show it can continue to operate as a global superpower even under pandemic circumstances. A number of its ships have been sidelined by Covid-19 outbreaks, to the point where the Pentagon is refusing to give out specific numbers anymore. In the most notorious incident, the aircraft carrier USS Franklin D. Roosevelt had to return to Guam after her captain publicly appealed to quarantine the crew, leading to both his dismissal and the resignation of the acting secretary of the Navy last month.

Moscow has not commented on the Anglo-American deployment. In lieu of a statement, the Russian Northern Fleet simply announced on Tuesday that it was “following” the flotilla’s movements, while the missile cruiser Marshal Ustinov deployed out of Severomorsk for “combat exercises in defending against enemy ships and aircraft” in the Barents Sea.

In the Barents Sea region of the shooting will be closed with the participation of the missile cruiser Marsh | src: https://t.co/J0QT2V2g6l | rmw: https://t.co/g4u634d3sU pic.twitter.com/cco78WzF2i