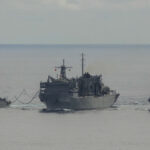 5 May 2020 – Millions of Americans and Britons losing their livelihoods under Covid-19 lockdowns can rejoice that their navies are open for business, staging a show of force on Russia’s doorstep for the first time since the Cold War. Three guided missile destroyers and a Royal Navy frigate sailed into the Barents Sea yesterday, to “assert freedom of navigation and demonstrate seamless integration among allies.”

30 Oct 2017 – The same countries that cheered when Yugoslavia and the Soviet Union broke up and insisted on ‘independent Kosovo’ now say Catalonia’s declaration of independence is unacceptable. But they wrote the rules the Catalans are now following.

21 Nov 2015 – Twenty years after it stopped the bloodshed, the historic agreement reached in Dayton, Ohio still survives in Bosnia. More of an armistice than a peace treaty, it is under attack by the very powers sworn to uphold it.