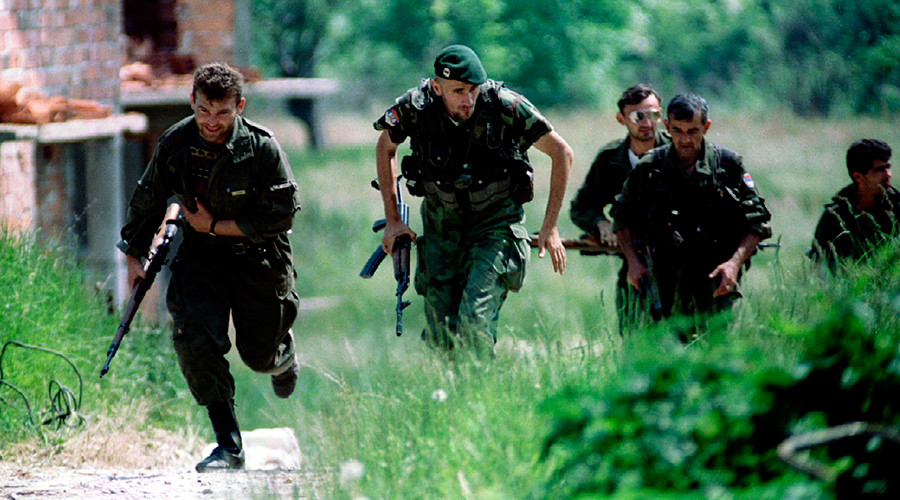 ARCHIVE PHOTO: Bosnian Serb soldiers run for cover during an operation near the northern Bosnian town of Brcko on the corridor connecting northern Bosnia with Serbia © Str / Reuters

21 Nov 2015 – Twenty years after it stopped the bloodshed, the historic agreement reached in Dayton, Ohio still survives in Bosnia. More of an armistice than a peace treaty, it is under attack by the very powers sworn to uphold it.

The General Framework Agreement for Peace in Bosnia and Herzegovina was initialed on November 21, 1995 at the Wright-Patterson Air Force Base near Dayton, giving the treaty its colloquial name. It took almost three weeks of negotiations to put an end to 1,326 days of brutal sectarian warfare – and it almost did not happen.

Bosnia-Herzegovina was a central republic in the multinational Yugoslav federation, which began breaking apart in 1991. As a solution to the territory’s tumultuous history, a power-sharing agreement had been in place between its Serb, Croat and Muslim communities. Alija Izetbegovic, a leader of the Bosnian Muslims, reneged on that agreement in March 1992 and declared independence believing he had US support. The US and EU recognition of Bosnia came by April 6, just hours after the Serbs and Croats reacted to Izetbegovic’s move by taking up arms.

The bloody conflict over land and legitimacy claimed just under 100,000 lives – though the figure was often tripled in hysterical media coverage that also conjured the specters of death camps and genocide. By 1994, the US had arranged a marriage of convenience between the Croats and the Muslims (now calling themselves “Bosniaks”), establishing the Federation of Bosnia and Herzegovina. After a NATO intervention into the conflict and a Croatian offensive against the Serbs in 1995, the Federation became one of the two component “entities” of the new Bosnia. The other was “Republika Srpska,” the Bosnian Serb Republic. The weak joint government was supposed to be in charge of foreign policy, international treaties, and little else.

However, the treaty also established the post of “High Representative,” a Western-appointed overseer who gradually morphed into a de facto colonial viceroy with sweeping powers. The High Representatives would revise and reinterpret the treaty, sack elected officials, and impose laws in the kind of social engineering and nation-building not seen since the 1878-1918 Austro-Hungarian occupation.

None of it worked. The more the washed-up Western politicians played God in Bosnia, the less they accomplished in healing the rifts between its conflicted communities. While the Dayton arrangement offered the possibility of reconciliation through voluntary cooperation, the tyranny of High Representatives offered every possible disincentive for the locals to make peace. Instead, the Dayton order became a way to continue fighting the war through political means.

Part of the problem is with the Bosnians themselves, to be fair. What caused the war in the first place was the inability of Bosnia’s ethno-religious communities to agree whether they should live together at all, much less how. As the most numerous group, the Muslims argue that Bosnia ought to be their nation-state, with the Serbs and Croats at best minorities, at worst interlopers who can “love it or leave it.”

Though mutually hostile, the Serbs and the Croats added up to over half of the country’s population in 1992, and argue that they are just as native to the land. Both communities point to Dayton as a guarantee of their rights, and oppose all attempts to revise the treaty, while the Muslims continue to urge the West to modify it in the interest of a “more functional” – meaning, centralized and majoritarian – government.

Ironically, the Dayton compromise is remarkably considerate of the interests of all Bosnian factions, especially compared to the subsequent US and NATO disdain for international laws and treaties. By the admission of one of its chief architects, Richard Holbrooke, the purpose of Dayton was less to make peace in Bosnia, and more to establish the US as a sort of global “white knight,” paint President Bill Clinton as a resolute peacemaker, and reassert US dominance in Europe and the Muslim world.

“Criticism of President Clinton as a weak leader ended abruptly, especially in Europe and among the Muslim nations,” while even “those who chafed at the reassertion of American power conceded, at least implicitly, its necessity,” Holbrooke wrote in his 1998 memoir, ‘To End A War.’

“After Dayton, American foreign policy seemed more assertive, more muscular. This may have been as much perception as reality, but the perception mattered,” he concluded. Ending the war redefined America’s role in post-Cold War Europe, Holbrooke argued.

Sure enough, within two years NATO was expanding rather than shutting down. By 1999, the Alliance launched its first-ever war of aggression, targeting Serbia in support of ethnic Albanian separatists in Kosovo. All the promises made to the Soviet Union at the end of the Cold War were set aside by what Madeleine Albright, Clinton’s Ambassador to the UN at the time of the Bosnian War and later Secretary of State, called the “indispensable nation.”

That Dayton survived at all, much less for two decades, is nothing short of a miracle. Its architects have argued on many occasions that they never intended Dayton to be a permanent solution, merely a stepping stone to a “better” Bosnia. Yet not even NATO has dared to openly violate the Bosnian armistice, perhaps wary of what might come next.

Twenty years on, Bosnia is no more a state than it was in November 1995, or April 1992. Hatred and mistrust between its communities remains a powder keg that could reignite at any time, setting off the neighboring shards of Yugoslavia whose existence is similarly bleak. The only thing that’s keeping it all contained is a 20-year old compromise reached in Ohio. A remarkable achievement, indeed.

One Response to “The Dayton Miracle: Bosnia Armistice, still Alive at 20”