With a Distracted Public, the Pentagon Tries to Get Away with Killing Innocent Civilians 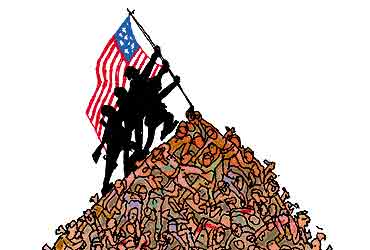 8 May 2020 – The United States’ wars continue to rage in the Middle East and Africa against the backdrop of the Covid-19 pandemic. Even in normal times, these conflicts got little public scrutiny. But with attention more occupied than usual, some U.S. military operations have been escalating even further. In recent years, these conflicts have become even deadlier for innocent people. The Trump administration has shown itself to be not just indifferent, but positively encouraging of the killing of civilians in foreign wars.

If there is a time to get away with killing people with no fear of accountability, it’s now. Yesterday, the Pentagon released its annual report on civilian casualties in its wars for the year 2019. According to the report, 132 civilians were killed by the U.S. military in Afghanistan, Iraq, Somalia, and Syria. In Yemen and Libya, countries where the U.S. also carries out airstrikes, the report simply claimed that no civilians were killed last year. “All DoD” — Department of Defense — “operations in 2019 were conducted in accordance with law of war requirements,” the report flatly stated, “including law of war protections for civilians.”

We already know from independent reports that Pentagon official figures on civilian casualties are, in general, woefully underreported. A 2017 investigation published by the New York Times found that, during a U.S. air campaign in Iraq, potentially thousands more civilians were killed than reported in official figures. In some cases, the military used video footage showing strikes on Islamic State positions as propaganda material, when in reality the footage showed airstrikes hitting homes full of civilians. Independent monitoring groups like Airwars have also documented thousands of civilian deaths from U.S. aerial campaigns that have gone unacknowledged in official figures.

The report issued to Congress this year was in line with new reporting requirements intended to provide more oversight about the impact of U.S. military operations on civilians. But the utility of these reported figures seems questionable: The military conducts almost no on-the-ground investigations of the impact of its strikes and is evidently willing to report figures that are absurdly low — literally incredible — for the sake of political expediency.

“The military often says that they don’t have the capacity to do this type of investigation. If that’s truly the case, they shouldn’t be bombing.”

In the past, the Pentagon suggested that it does not have the resources to conduct on-the-ground investigations in cases in which civilians are alleged to have been killed. Recently, reports surfaced that the military has begun requesting more funds to help track civilian deaths. But independent researchers and nongovernmental organizations have already been carrying out such investigations for years, with far few resources than the Pentagon — with its vast budget — has at its disposal. All this raises the question of who exactly the military has been killing over nearly two decades of war.

“It’s the military’s responsibility, if they’re going to carry out a strike, to have some way of knowing who they’re killing or injuring and what the impact is,” said Daphne Eviatar, director of the Security with Human Rights program at Amnesty International. “In this congressional report, the Pentagon stated that all their operations were in line with the laws of war. But if they don’t even have a basic understanding of the impact of their strikes, it is difficult to see how they can conclude that.”

The number of airstrikes carried out by U.S. forces has declined over the last two years, as military campaigns in Iraq and Syria wound down. American forces still carry out periodic operations in those countries, however, as well as undertaking strikes in Yemen and Somalia ostensibly aimed at terrorist groups. In Somalia in particular, U.S. operations have been ramping up heavily in recent months. While the military maintains that these strikes are not killing any civilians, reports published by The Intercept and elsewhere suggest a deadlier impact on innocent people in the country than the Pentagon is acknowledging. In some cases, the military has dismissed credible reports that its operations have killed Somali civilians.

With loosened targeting rules under President Donald Trump and a public that is even more distracted than usual, the conditions are ripe for negligent behavior that will result in the deaths of innocents. Nongovernmental organizations that devote resources to investigating the impact of U.S. airstrikes have noted with frustration that, despite tighter reporting requirements from Congress, a gigantic budget, and a sprawling organizational footprint, the military is still not giving an honest account of the impact of its actions. The obviously underreported figures provided in this report will do little to change the perception that the ugly truth is still being hidden.

“We do lots of research on the impact of airstrikes, visiting places they’ve taken place, interviewing survivors, analyzing satellite imagery, and working with weapons experts,” said Eviatar, noting that even limited investigations have turned up far more civilian casualties than the military acknowledges. “The military often says that they don’t have the capacity to do this type of investigation. If that’s truly the case, they shouldn’t be bombing places if they don’t even have the ability to know who they’re killing.”