Correa’s Trial Is an Attack on Ecuador’s Democracy 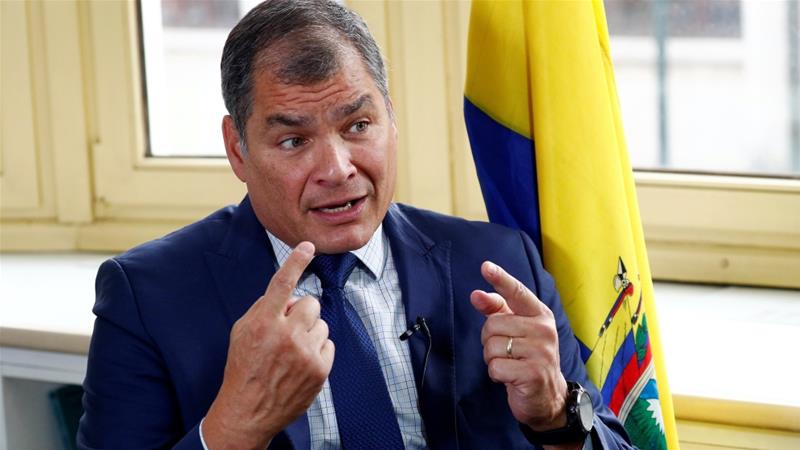 The Ecuadorian government’s ‘lawfare’ against former President Rafael Correa is not good news for democracy in Ecuador or Latin America. [File: Francois Lenoir/Reuters]

2 Jun 2020 – On April 7, a top court in Ecuador sentenced the country’s former left-wing President Rafael Correa to eight years in jail in absentia for corruption. The ruling in the case, which came to be known as Sobornos (Bribes) 2012-2016, is still pending appeal and Correa’s lawyers will no doubt take this matter to international institutions where they will argue he has been the victim of a political witch-hunt with no respect for due process.

Correa, who has been living in his wife’s home country, Belgium, since before Ecuador’s current president, Lenin Moreno, unleashed the judiciary against him, is unlikely to be extradited in the context of what has become a highly politicised process.

The fact that Interpol has already rejected a red notice that Ecuador had requested against Correa, albeit for a different case, is a strong indicator that there is little international trust in the political neutrality of Ecuador’s justice system.

The primary goal of the trial, however, is not to imprison Correa, but to make sure he is prevented from entering the country and from appearing on any ballot in the 2021 presidential and parliamentary elections.

This manipulation of the judicial system in order to prosecute opponents is familiar enough to observers of Latin America; indeed, it is such a well-worn strategy of the region’s resurgent right that it has its own name: “lawfare”.

What is new in the case of Ecuador is the scale of this practice. Perverting the legal system in order to subvert the democratic process has become the defining strategy – indeed, the essence – of the current government, which is faced with plummeting popularity and an opposition that would win in any fair election. This is not good news for democracy in Ecuador or Latin America.

The Moreno government has faced rising unpopularity (his credibility rating oscillates between seven and 14.7 percent depending on the pollster, and a recent poll put his approval rating at 18.7 percent) amid the disastrous state of the economy, the gross mismanagement of the COVID-19 crisis, and major backsliding in the area of social policy. All this has meant that Correa, whose 10-year rule was crowned by a sharp reduction of poverty and inequality, and sustained economic growth, once again looms large on the political horizon.

Polls suggest that were elections to be held tomorrow, Correa, or even “Correa’s candidate of choice”, would come first place in the first round of presidential elections and possibly even win the runoff. The possibility that Correa’s movement might return to power has led a desperate government to take “lawfare” to new heights, a tendency that has serious implications for democracy in the region, as similar political battles will no doubt play out throughout Latin America in the coming years.

With elections scheduled for February 2021, Moreno’s government has accelerated its attacks on Correa and his followers. In the aftermath of large-scale protests against Moreno’s IMF-driven reforms in October 2019, several Correa allies were arrested on dubious charges, including Paola Pabon, the elected governor of Pichincha province, which encompasses the country’s capital.

Several legislators belonging to Correa’s party sought refuge in the Mexican embassy to avoid being arrested. Under international pressure, including some exerted by the Inter-American Commission on Human Rights (IACHR), Ecuador eventually released some prisoners and allowed safe passage for some who wanted to seek asylum in Mexico.

Some prominent supporters of Correa’s political movement, however, were not as lucky. Jorge Glas, the former vice president of Ecuador and a close Correa collaborator, for example, remains in jail on charges of corruption, despite criticism that his trial was aimed at removing him from the vice-presidency.

Correa can no longer run for the presidency after the Ecuadorian constitution was amended in 2018 with a provision barring elected officials from running more than once for the same office. The amendments were approved in a referendum, which the Moreno government convened and which IACHR and the Organization of American States criticised.

However, Correa can still vie for other elected office. If he were to run for the vice presidency or for a seat in the National Assembly, it could draw a great deal of popular support to his political movement and help it win next year’s election. Only a criminal conviction against Correa, confirmed in appeals, could prevent that.

Coincidentally or not, as of April 2020, Ecuador’s chief prosecutor, Diana Salazar, a fervent anti-correista, was overseeing more than 25 investigations against the former president. But only certain types of crimes, in the cases of former civil servants, can be tried in absentia. And only a final conviction, after the appeals process has been fully exhausted, can lead to the stripping of someone’s political rights and bar that person from participating in elections.

So, in May 2019, the prosecution opened a corruption investigation against Correa and several of his former collaborators for illegal campaign financing. The case soon rested on the testimony of one of Correa’s former advisers, Pamela Martinez, who claimed to have accepted money, with Correa’s knowledge from several donors.

After offering her testimony against Correa, Martinez, who had been arrested as part of the investigation, was able to secure her freedom. Part of the evidence used against Correa is a notebook supposedly detailing illegal transactions in 2013-2014.

Martinez claimed she had written the whole notebook from memory “on an impulse” during a flight from Quito to Guayaquil in 2018. The defence has argued that this seemed unlikely, given that she documented amounts to the exact dollar for dozens of cash deposits from different individuals.

On April 6, the day before the court announced its verdict in the case, what appeared to be emails between the secretary of the Prosecutor General and the judge presiding over the case, containing a draft of the final sentence, were leaked by a group of people claiming to be judicial workers. These claims, if proven true, could lead to the judge and those involved in the prosecutor’s office being criminally tried for perverting the course of justice.

The COVID-19 crisis has brought Ecuadorian judicial proceedings to a standstill. But the case against Correa has proceeded, and we can expect to see the appeals process speed up too. If the former president registers as a candidate in the 2021 electoral race on September 18, he would be immune from prosecution until voting is done. The clock is ticking.

The case itself has been marred by irregularities, which could discomfit the judges in the appeals process. And only time will tell whether Correa’s appeal to a higher court will yield the same result or lead to the ruling being overturned.

Likewise, Ecuador’s dire economic travails, its disastrous handling of COVID-19, rising social unrest, and popular anger against the government could still disrupt elites’ carefully crafted plans to subvert the democratic will of the people and be rid of Correa and his politics. Regardless, nothing less than democracy itself will be at stake in Ecuador during the coming months.

Steve Striffler is the Director of the Labor Resource Center and Professor of Anthropology at UMass Boston.