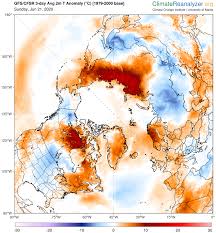 Temperature departures from average projected during the next three days, showing extreme temperatures in Siberia and parts of Canada. (Climate Reanalyzer)

23 June 2020 – A northeastern Siberian town is likely to have set a record for the highest temperature documented in the Arctic Circle, with a reading of 100.4 degrees (38 Celsius) recorded Saturday in Verkhoyansk, north of the Arctic Circle and about 3,000 miles east of Moscow. Records at that location have been kept since 1885.

If verified, this would be the northernmost 100-degree reading ever observed, and the highest temperature on record in the Arctic, a region that is warming at more than twice the rate of the rest of the globe.

On Sunday, the same location recorded a high temperature of 95.3 degrees (35.2 Celsius), showing the Saturday reading was not an anomaly. The average June high temperature in Verkhoyansk is just 68 degrees (20 Celsius).

Verkhoyansk is located at 67.5 degrees north latitude, whereas the Arctic Circle begins at 66.5 degrees.

Siberia’s persistent, freakishly mild weather is reverberating around the world

The town of about 1,300 is located farther north than Fairbanks, Alaska, and is known for having an unusually wide temperature range. During the winter, Verkhoyansk is one of the coldest spots in the world, with temperatures frequently dipping well below minus-50 degrees.

Temperatures in Chersky, about 700 miles to the northeast of Verkhoyansk, reached 86 degrees (30 Celsius) in the past week, which is also unusual and caused by the large area of high pressure, or heat dome, that remains parked over it.

In 2020, Siberia has stood out for its above-extreme temperatures, which have accelerated the melting of snow and ice; contributed to permafrost melt, which led to a major oil spill; and have gotten the Siberian wildfire season off to an unusually early and severe start.

The oil spill in Norilsk — above the Arctic Circle in north-central Russia — leaked at least 20,000 tons of diesel fuel into the nearby Ambarnaya River and is thought to be the worst spill in the Russian Arctic’s history.

Wildfires ravaged Siberia last year. This spring, the blazes are starting even bigger.

While some questions remain about the accuracy of the Verkhoyansk temperature measurement, data from a Saturday weather balloon launch at that location supports the 100-degree reading. Temperatures in the lower atmosphere, at about 5,000 feet, also were unusually warm at 70 degrees (21 Celsius), a sign of extreme heat at the surface.

Such a reading makes the record high “even more legitimate,” meteorologist Etienne Kapikian of Meteo France said on Twitter.

Randy Cerveny, a professor at Arizona State University who leads the World Meteorological Organization’s (WMO) weather and climate extremes team, said in an email that the U.N. agency is “preliminarily accepting the observation as a new extreme, pending further detailed review.”

The preliminary finding, Cerveny said, is based in part on the upper air observations that bolster the surface temperature measurement.

The WMO verifies global temperature records, though it does not yet recognize the polar region north of the Arctic Circle as a separate region for the WMO extremes archive. In a statement released on June 23, the WMO said they are seeking information from the Russian Federal Service for Hydrometeorological and Environmental Monitoring, or Roshydromet, in order to determine if the 100.4-degree reading will stand as a new official record.

“It has been an unusually hot spring in Siberia, and the coinciding lack of underlying snow in the region combined with overall global temperature increases, undoubtedly helped play a critical role in causing this extreme temperature observation,” Cerveney said in the statement.

During the spring, stubborn and sprawling areas of high pressure parked over the region resulted in parts of Siberia recording temperature departures from average that reached a staggering 18 degrees (10 degrees Celsius), according to the Copernicus Climate Change Service, which is an initiative of the European Union.

In western Siberia in particular, it was “by far” the warmest May on record, a Copernicus special report states.

For example, on May 22, the town of Khatanga, Siberia, located well north of the Arctic Circle, recorded a temperature of 78 degrees, about 46 degrees above normal. The typical maximum temperature for the day at that location is 32 degrees. The town obliterated its previous record high for the date of 54 by about 24 degrees and its monthly record of 68 by about 10 degrees.

According to the report on recent Siberian temperatures, the persistence of the warm anomalies stands out from the historical record.

The recent trends are likely to continue, too, with computer models showing continued extreme warmth in northern Siberia in the next 10 days, spilling over into parts of Canada, Scandinavia and, eventually, most of the Lower 48 states.

In addition to the May record, the average temperatures in the December-May period were the warmest recorded, dating to 1979. 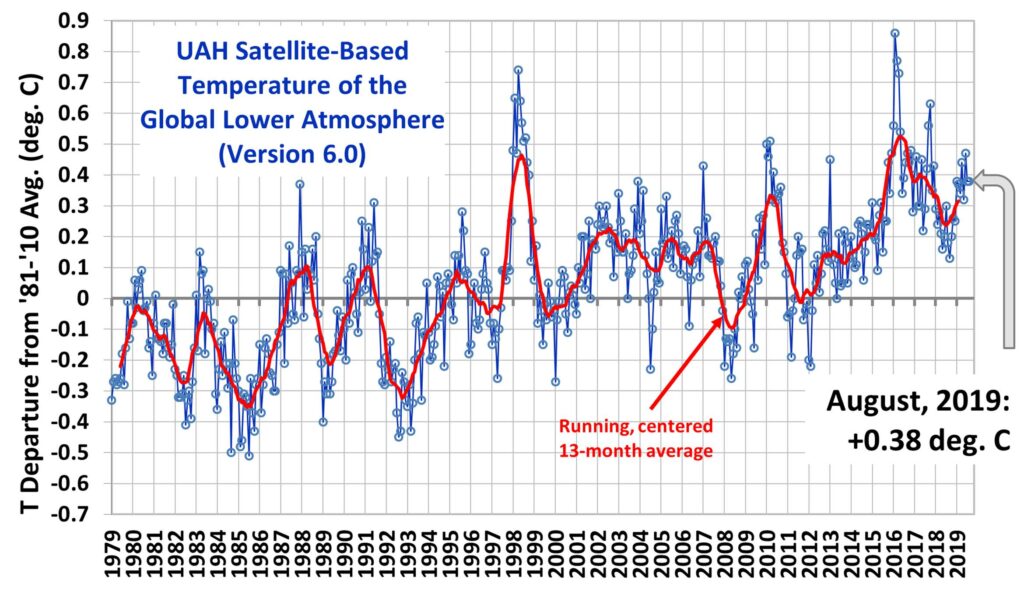 By pairing the data with NASA’s surface records going back to 1880, Copernicus scientists found this most recent six-month period is probably unprecedented since at least 1880.

The Siberian Arctic, like the Arctic as a whole, is seeing rapidly increasing temperatures as a result of human-caused global warming. This is in part because of accelerating feedback loops between melting snow and ice and air and ground temperatures, as well as other features of the region’s climate.

Large wildfires are proliferating from Siberia to Alaska and Scandinavia; permafrost is melting, which releases even more planet-warming greenhouse gases into the atmosphere; and sea ice extent and thickness are plummeting, among other changes. The daily total intensity of Siberian wildfires are now rivaling those of 2019, the WMO stated, and that was a record year for fire activity.

Isabelle Khurshudyan in Moscow contributed to this report.