His lawyers told the court he was too ill to attend via videolink from Belmarsh prison and was suffering from a “respiratory problem”. Assange’s partner Stella Morris explained later that Assange’s doctor had advised him not to visit the videoconferencing room to minimise his chance of exposure to coronavirus. 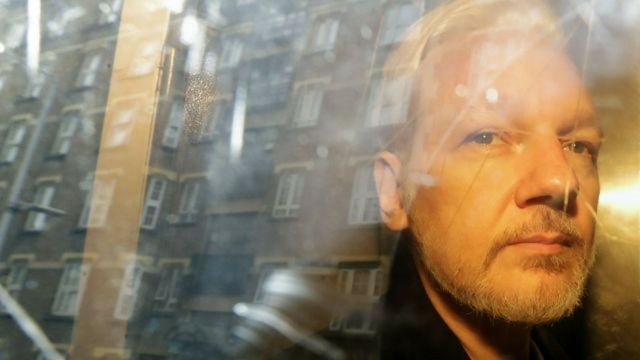 WikiLeaks founder Julian Assange as he is transported in a police vehicle to a hearing.
(Photo: AP Photo/Matt Dunham)

Assange has a chronic lung condition and his health has been ruined by years of psychological torture and medical neglect. He is now effectively being tried in absentia, under pain of a potentially fatal contraction of COVID-19.

The coronavirus pandemic is being used to further impede Assange’s ability to conduct his defence against Espionage Act charges brought by the United States government carrying a 170-year prison term. Since a public health lockdown was implemented in British prisons in March, Assange has been unable to meet his lawyers in person and his communications by phone have been minimal and disrupted.

None of which is of the slightest concern to presiding district judge Vanessa Baraitser. She is moving ahead with court proceedings, ordering the defence and the prosecution to complete their psychiatric assessments of Assange by July 31, despite doctors having no access to conduct their evaluations.

Baraitser failed to confirm a time and place for the next stage of Assange’s extradition hearing, due to begin September 7. This is yet another obstacle in the way of fair and accurate reporting. Since the lockdown, only a small number of journalists have been able to access the courtroom. The vast majority have been forced to dial in to a routinely inaudible conference call, yesterday being no exception.

WikiLeaks Ambassador Joseph Farrell said after yesterday’s proceedings, “It’s ridiculous that we still don’t have a time and a place for the remainder of the hearing. The delay has been a punishment in itself. Whether Julian can get proper access to his legal team remains unlikely, as Belmarsh prison remains in full lockdown. And to add insult to injury, the court is unable to provide reporters with the most basic levels of access.”

Last Wednesday in Australia, several politicians, journalists, human rights campaigners, and lawyers wrote to Foreign Minister Marise Payne, urging her to intervene and request bail for Assange, who is an Australian citizen. Their pleas fell on deaf ears.

Despite all the efforts of the courts and political establishment to isolate, silence and destroy Assange, the fundamental political questions involved in his case have erupted in the growing protests across the world.

In its reports on the illegal wars in Iraq and Afghanistan, torture in Guantanamo Bay, illegal state spying and brutal diplomatic intrigues, WikiLeaks lifted the veil on the violence of world imperialism and its obliteration of democratic rights. These issues now confront the hundreds of thousands of Americans protesting the killing of George Floyd and the continuing waves of police violence and fascist agitation directed from the White House.

Videos of heavily armed police officers and national guardsmen dishing out wanton violence to peaceful protestors resemble scenes from an occupied country. In one video shared on social media, police and National Guard troops are filmed marching down a residential street behind an armoured car screaming at people to “Get inside!” Spotting the camera, an officer yells, “Light ‘em up!”, ordering a hail of paint rounds to be fired at the person filming.

“Light ‘em up!” was the phrase used by US Apache gunship helicopter pilots in Iraq in the infamous “Collateral Murder” video published by WikiLeaks in 2010, before they murdered a group of Iraqi civilians including children, Reuters journalists, and first responders.

What terrified the ruling class about the publication of this video was that WikiLeaks’ reporting would find a powerful response among working-class people across the globe, appalled at the atrocities carried out and then covered up by their governments. In November 2010, WikiLeaks released hundreds of thousands of leaked diplomatic cables, revealing US-backed corruption and repression in dozens of countries, including Tunisia. Just a month later, mass protests in the country overthrew the Ben Ali government and sparked the Arab Spring.

The ruling elite took serious note of these events. Their decade-long persecution of Assange is rooted in a desperate fear over the potential that exists in the ranks of workers and youth for a global struggle against imperialism and authoritarianism. In the developing protests following Floyd’s murder, that potential is knocking on the gates of the White House itself. And it finds reflection in the demonstrations of solidarity being carried out by growing thousands across the world.

The violence meted out to protestors and the slow-motion assassination of Assange are one and the same policy; that of a ruling class under siege, sitting on a social powder keg and unable to countenance any opposition.

These events are a crushing refutation of the perspective that Assange and WikiLeaks can be defended by appeals to the state and its political apologists. What the British government has proved with the vindictive legal travesty orchestrated by its courts, the American government is proving with pepper spray, rubber bullets and batons: the capitalist state is not a neutral arbiter of justice. It is an instrument for defending the interests of the ruling class against the majority of society, whom they exploit and oppress.

Appeals to representatives of parties committed to defending that state, and to the “law and order” it oversees, are a blind alley. This was exposed last spring when former Labour Leader Jeremy Corbyn, the target of countless such appeals, declared Assange’s fate was “a matter for the courts.” He has since handed the Labour Party over to Sir Keir Starmer, who as Director of Public Prosecutions oversaw Assange’s continued arbitrary detention in the Ecuadorian embassy in London.

The path to Assange’s freedom lies not through pressure on capitalist politicians, but through the struggle of the working class and youth now being brutalised on the streets of America by the henchmen they direct.

From the very beginning, the World Socialist Web Site (WSWS) has insisted that the defence of Assange is inextricably connected with the struggles of the working class. The events of the last week are dramatic proof of this. The same state that branded Assange a “cyber-terrorist”, levelled Espionage Act charges against him and deployed CIA agents to suppress his work is now branding hundreds of thousands of protestors as terrorists and agents of foreign powers and deploying the military to suppress them.

This objective link must be consciously grasped and acted upon. The political advance of the protests depends on their taking up the fundamental issues of democratic rights and anti-imperialism embodied in the case of Assange. Likewise, Assange’s freedom depends upon his supporters turning to this unfolding struggle of workers and youth and calling on the protestors to come to his defence.

The WSWS and the Socialist Equality Party have every confidence that such an appeal will, in conditions of a fierce confrontation with the state’s “bodies of armed men”, gain a mass and committed following.

Assange’s next hearing, at Westminster Magistrates Court, is scheduled for June 29, at 10.00 am.