Missing Perspective in Media: Iran/Venezuela Ties Are None of US’s Business 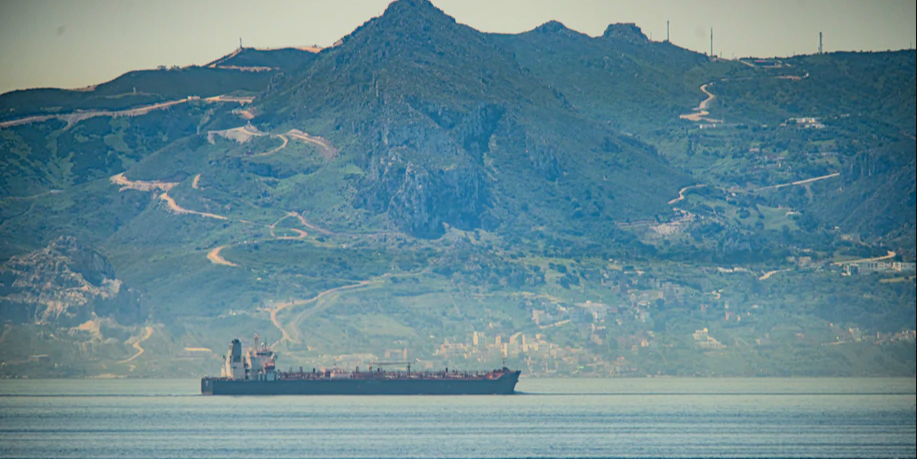 10 Jun 2020 – The American state not only snuffs out lives by pressing knees to necks domestically, it also seeks to asphyxiate entire countries like Iran and Venezuela. When the US empire’s foes defy Washington’s dictates, corporate media willingly participate in drumming up a crisis over it—even when what’s at stake is something as seemingly mundane as an exchange of goods. This is evident in corporate media coverage of Iranian oil shipments to Venezuela, which has framed the deliveries as a problem that needs to be solved, rather than a commercial transaction that doesn’t concern third parties.

With Iran’s tankers en route, an article in the Washington Post (5/23/20) states:

Venezuela’s US-backed opposition is providing some potential ammunition with claims the Iranians could be transporting more than mere gasoline.

Opposition leaders have warned that Tehran could be providing materials for what they describe as a covert operation to help Maduro’s intelligence apparatus construct a listening post in northern Venezuela to intercept aerial and maritime communications.

“For Iran, an enemy of the United States, this means they are almost touching America’s tail,” said Iván Simonovis, security commissioner for Juan Guaidó, the Venezuelan opposition leader recognized by the United States as the nation’s rightful leader. 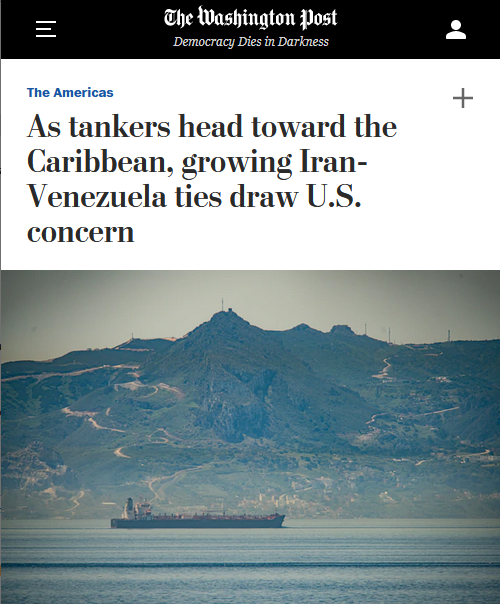 The Washington Post (5/23/20) reports that Venezuela is “offering Tehran the prospect of a new center of influence just across the Caribbean Sea from Florida.” (By “just across,” the Post means 1,100 miles away, with Cuba in between.)

The paper presented the issue of whether Iran is secretly sending Venezuela spy tech as a “he said, she said,” as if both claims were equally likely to be true. Yet there isn’t a shred of evidence that Iran’s shipment was geared toward “help[ing] Maduro’s intelligence apparatus,” and the Post opts not to share this with readers.

Raising the alleged danger that Iran and Venezuela might be up to something nefarious, however, helps legitimize the possibility of the US carrying out a military attack to stop the delivery. The Post continued:

US officials downplayed Iran’s suggestion that those forces will confront the convoy. Pentagon spokesman Jonathan Hoffman told reporters Thursday he was not aware of plans to launch a military operation against the Iranian tankers.

But a senior Trump administration official, speaking on the condition of anonymity to describe internal discussions, said the administration “would not abide” Iran’s support of Maduro.

“The president has made clear the United States will not tolerate continued meddling by supporters of an illegitimate regime,” the official said.

At no point is there anything in the article to question the idea that one country sending resources to another may be a justification for launching an act of war. Nor is any counterpoint provided to the idea that Iran is “meddling” in Venezuela by selling it oil, while the US isn’t “meddling” in Venezuela by repeatedly trying to overthrow its government (Grayzone, 1/23/20) and crushing its economy (FAIR.org, 2/6/19).

In such an ideological context, it becomes possible to present adding more sanctions, of the sort that have ravaged the healthcare systems in both Iran and Venezuela (FAIR.org, 3/25/20), as a reasonable reaction to relations between the two: “Analysts say the [Trump] administration is more likely to use additional economic sanctions than force to deter Iranian/Venezuelan trade.” This phrasing obscures the ways in which sanctions are a form of “force,” but that’s exactly the word for sanctions that have caused food shortages in Iran, and are estimated to have killed more than 40,000 Venezuelans from 2017 to 2018 (CEPR, 4/25/19). 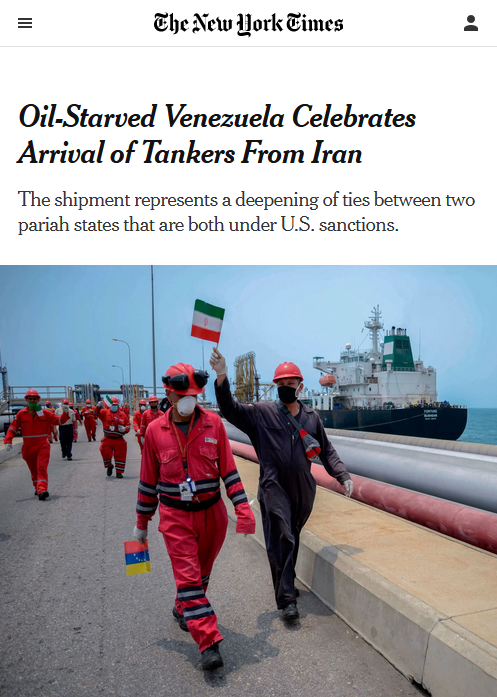 An article in the New York Times (5/25/20) made clear from the start that its audience should be concerned about Iranian/Venezuelan commerce, describing it in the second sentence as “a deepening of economic relations between Venezuela and Iran, two pariah states run by authoritarian leaders.” In other words, the bad guys are joining forces; be alarmed.

The Times quoted “a Venezuela analyst at the Eurasia Group” saying that “the oil shipment highlighted the increasingly parallel economic and political goals of [Iran and Venezuela], as well as the US government’s increasingly limited options to obstruct their relationship,” but offers nothing to question whether or why the US should be trying to “obstruct their relationship.”

The article said that “the US government, distracted by the coronavirus pandemic and having already issued harsh sanctions, is left with few retaliatory options beyond military intervention.” “Retaliatory” implies that Iran and Venezuela doing business with each other is somehow an act of aggression against the United States, a ludicrous proposition, especially given that the US government has long been carrying out a range of attacks on both nations. But such smoke and mirrors are required if “military action” is to be treated as a valid option. That the United States could react to Iran selling oil to Venezuela by doing nothing does not enter into the equation.

The Wall Street Journal (5/20/20) likewise gave credence to the proposition that more sanctions are in order, particularly against Iran, without airing the view that condemning Iran to even greater mass coronavirus death (FAIR.org, 4/8/20) so as to punish it for engaging with Venezuela would be undesirable. The paper said:

Iran’s support for Venezuela underscores the limits of sanctions as a foreign policy tool. After decades of sanctions, Iran has developed an extensive refining industry that makes its own equipment and churns out the motor fuel its population needs. With much of its oil going unsold amid sanctions and a global collapse in demand, Iran is now finding new outlets for its crude among fellow US foes.

What’s worth thinking about, evidently, is sanctions’ effectiveness, not whether they should be levied at all. 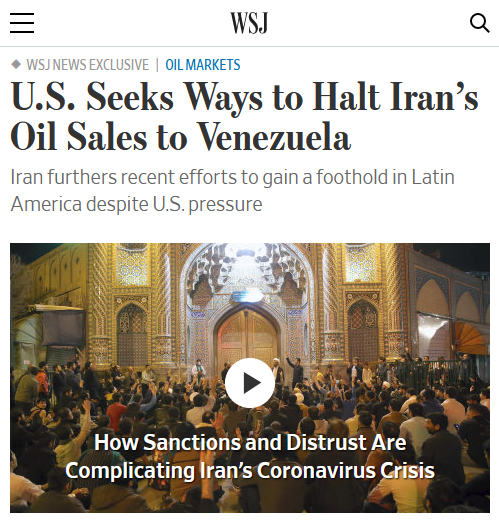 Nor does the piece come close to communicating the harm that sanctions have done to Venezuela and Iran. It described sanctions on Iran as “part of a broader strategy to increase pressure on the regime,” as though these measures don’t affect the general public in Iran—when, in actuality, they are killing cancer patients (Foreign Policy, 8/14/19).

The article attempted to absolve US sanctions on Venezuela for their degradation of Venezuela’s oil industry, alleging that refining

plants in the South American nation—which sits on the world’s biggest crude reserves—are derelict after years of corruption and mismanagement that predate the imposition of strict sanctions on its oil sales last year.

These restrictions impacted Venezuela’s oil industry in several ways. First and most evidently, loss of access to credit stops you from obtaining financial resources that could have been devoted to investment or maintenance….

There are also more direct links between finance and real activity that can lead a firm that gets closed off from financial ties to experience a decline in its productive capacity. For example, one of the most effective mechanisms that [Venezuela’s state-owned energy company] PDVSA had found to raise production in recent years was the signing of financing agreements in which foreign partners would lend to finance investment in a joint venture (JV) agreement as long as they could pay the loan from the JV’s production. The executive order effectively put an end to these loans.

Likewise, before sanctions were imposed, PDVSA had begun to refinance a significant part of its arrears with service providers through the issuance of New York law promissory notes. The executive order also put an end to these arrangements.  What was unusual about PDVSA in 2017 was not that it had a large level of arrears—many oil producers had accumulated arrears after the price plunge. What was unusual is that it was unable to refinance them.

Thus US sanctions had been hampering Venezuela’s oil sector for at least two years longer than the Journal claims.

The paper also quoted Adm. Craig Faller, who heads the US Southern Command in the Caribbean, saying that “Iran’s outreach to Venezuela is meant to help it ‘gain a positional advantage in our neighborhood as a way to counter US interests.’” What’s missing from the piece is any consideration of the possibility that Venezuela is Venezuela’s “neighborhood,” and that what happens in Venezuela might not be a matter of “US interests” but of Venezuelan interests.

The Journal excludes from its account the point of view that countries in the hemisphere have a right to buy and sell resources from and to whichever countries they want, irrespective of US wishes. It did share the view of US officials that

the US could also try to confiscate the ships, through a US court proceeding called “forfeiture action” for violating American law…. But with Venezuela unlikely to cooperate with such an order, the legal tool would have to be used when the vessels stop to refuel in ports on their way to Iran, the officials said.

The paper, however, declined to platform anyone objecting to the prospect of US piracy.

There is no shortage of people from Iran or Venezuela, or US writers or peace activists, whom these papers could have turned to provide the points of view that they’ve left out. Yet many dubious-at-best angles on Iranian/Venezuelan relations are offered up as though they constitute the full gamut of takes on the matter.

Media audiences aren’t exclusively composed of unthinking rubes who believe everything they read. Yet if enough people are told, over and over again, that the US has the right to intervene anywhere it wants, and that perceived villains must be thwarted, with little to challenge this perspective, many in that audience are going to come to believe that it’s true.