12 Jun 2020 – The New York Times’ senior correspondent in Afghanistan, Mujib Mashal, somehow managed to write a 3,700+ word article “How the Taliban Outlasted a Superpower: Tenacity and Carnage” (5/26/20) that purported to explain how the Taliban managed to “outlast a superpower through nearly 19 years of grinding war,” without examining at all how the US contributed to reviving and sustaining the Taliban insurgency. 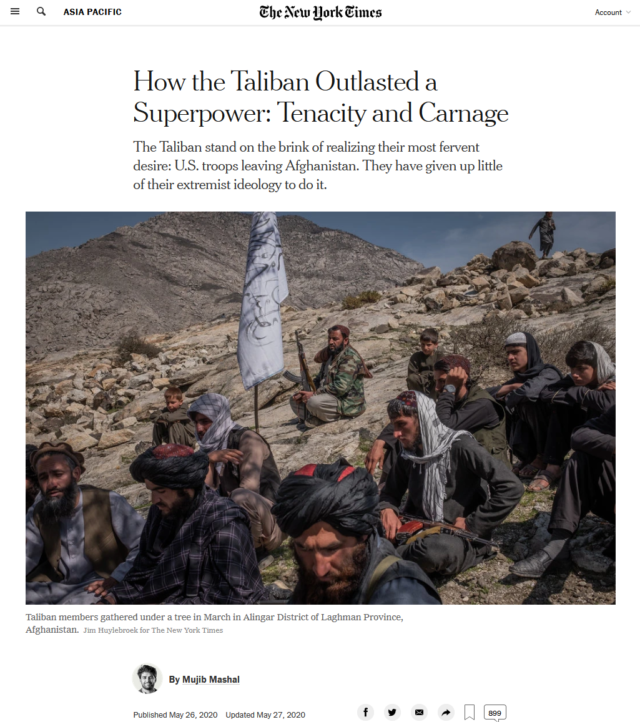 The Times credited a variety of reasons  to explain how the Taliban outlasted the US, ranging from an expansion of an “illicit funding regime built on crimes and drugs,” to a “system of terrorism planning and attacks” that pressured the US-backed Afghan government. “Positioning themselves as a shadow government,” the “corruption and the abuses of the Afghan government,” and their success with an “increasingly sophisticated information operation” designed to “ensure that recruitment streams would not dry up” were also cited as explanations.

Curiously, all these explanations exclude the US’s illegal occupation and state terrorism as the reason for the Taliban’s longevity and persistence. Instead, the Times condemned the Taliban for changing “little of its harsh founding ideology” and “clinging to its old ways of repressing women, art and culture,” as well as other offenses:

They have never explicitly renounced their past of harboring international terrorists, nor the oppressive practices toward women and minorities that defined their term in power in the 1990s. And the insurgents remain deeply opposed to the vast majority of the Western-supported changes in the country over the past two decades.

Although the Times mentioned that the US supported Osama bin Laden and the reactionary Mujahedeen extremists against the Soviet Union in Afghanistan, it never explicitly acknowledged that the US is responsible for the Taliban’s rise, after they defeated other factions in the “vacuum left behind by the Soviet withdrawal.” There’s no indication that the US itself is responsible for the Taliban’s oppressive practices, even though the US intervened in a civil war against the Afghan Communist Taraki government—which had made advances towards ostensible US goals like educating girls and eliminating opium production—six months before the US baited the Soviet Union into invading Afghanistan in 1979 (FAIR.org, 3/21/14).

The Times also distorted history when it claimed that, after the US’s illegal invasion in 2001, the

Taliban reorganized as a decentralized network of fighters and low-level commanders empowered to recruit and find resources locally while the senior leadership remained sheltered in neighboring Pakistan.

The Taliban didn’t “reorganize” as a “decentralized network of fighters,” they surrendered shortly after the invasion. Not long after the Taliban’s leader at the time, Mullah Omar, resigned and went into hiding on December 5, 2001, the newly appointed leader, Mullah Obaidullah, reached an agreement with former Afghan President Hamid Karzai for the Taliban to surrender their weapons, as well as their last stronghold in Kandahar, in exchange for amnesty for Afghan Taliban fighters (ABC, 1/6/06). 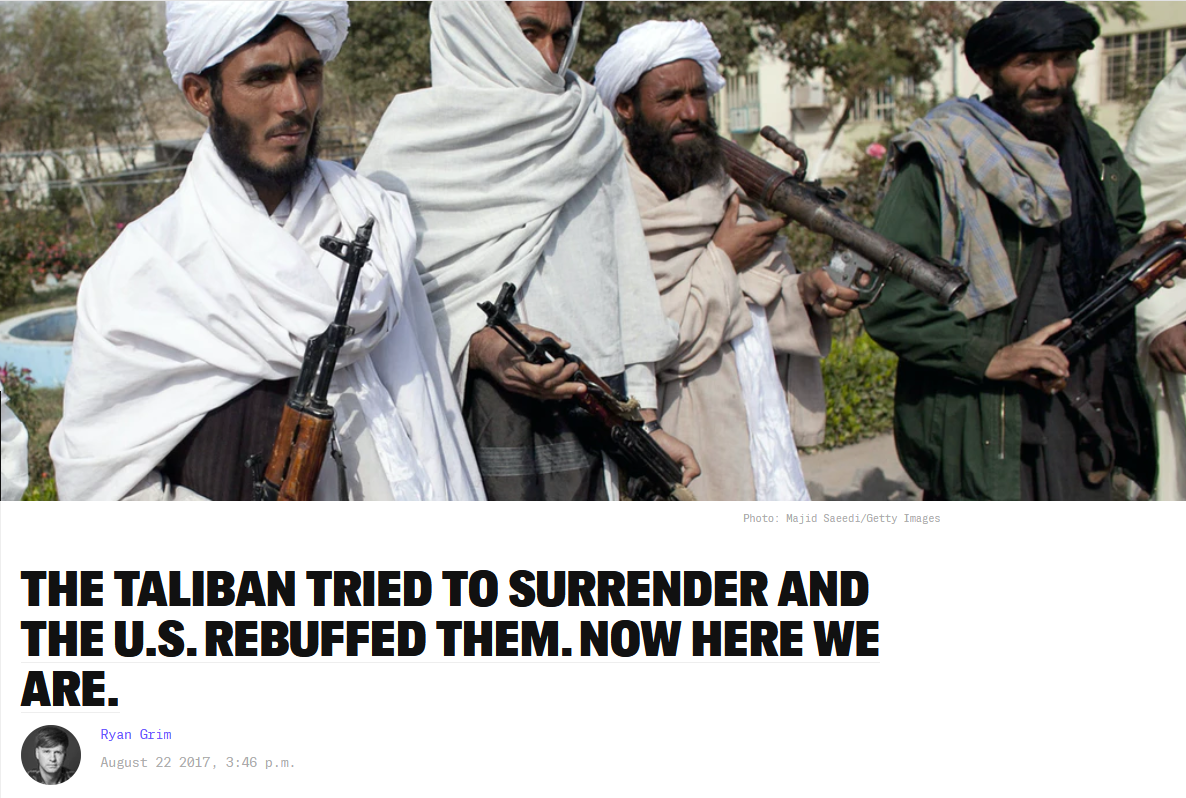 Ryan Grim (Intercept, 8/22/17) on the Taliban: “When they were driven from power, the population was happy to see them go. The US managed to make them popular again.”

Not only did the US make no attempt to prevent war by ignoring the Taliban’s overtures to surrender bin Laden to the US for trial both before and after the September 11 attacks, the US also rejected the Taliban’s efforts to end the war by ignoring the publicly agreed upon amnesty in favor of persecuting, torturing and killing suspected former Taliban members, who had stopped fighting and returned to civilian life, or fled to Pakistan (New York Times, 12/7/01; Intercept, 8/22/17). The Times itself acknowledged that the Taliban had effectively disbanded when it noted that the “Taliban’s fighters went home as the Islamic Emirate disintegrated,” while simultaneously asserting that its leaders were planning “a longer war of attrition” against the US from safe havens in Pakistan.

According to journalist Anand Gopal (Foreign Policy, 11/10/10), even after fleeing to Pakistan, large segments of the Taliban leadership were still open to “returning to Afghanistan and abandoning the fight.” It wasn’t until May 2003 that the Taliban announced that it had regrouped under new leadership, and was prepared to expel the US through guerilla warfare (Christian Science Monitor, 5/8/03). It began to dramatically escalate violence in 2006–07 (Washington Post, 12/9/19). The Taliban’s resurgence wasn’t inevitable, as the Times acknowledged that many Taliban commanders interviewed for the article could “scarcely even dream of a day they might be able to fight off the US military” in the initial months after the invasion. It was the US’s insistence on rejecting amnesty in favor of finding and punishing Taliban fighters that led to that revival.

According to the Times, it wasn’t until 2007 that the Taliban began more “serious territorial assaults” by reviving and refining for use against the US military the “old blueprint the United States had funded against the Soviets in the same mountains and terrain.” After the Taliban’s resurgence in 2006–07, the Times noted that “fighters keep signing up…in part because of deep loathing for the Western institutions and values the Afghan government has taken up from its allies.” 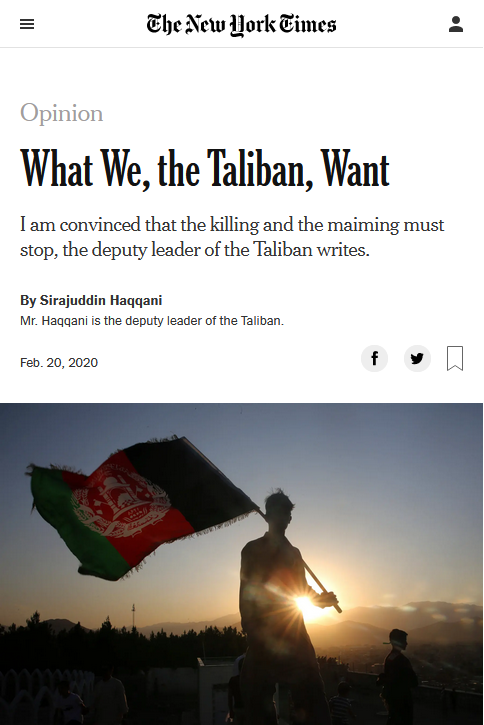 In a New York Times op-ed (2/20/20), Taliban deputy leader Sirajuddin Haqqani said the Taliban stuck with talks despite an “intensified bombing campaign against our villages by the United States.”

If that’s part of the answer, what else explains how the Taliban were able to “keep recruiting enough young men to continue fighting,” even at the “peak of the long American military presence and the coordinating effort to help the Afghan government win hearts and minds in the countryside”? It’s no secret that the Taliban’s most important goal is the withdrawal of foreign military forces, and it’s patronizing to think the US ever had a shot at tricking Afghans into being content with imperial domination by winning “hearts and minds.” Their leaders even published an op-ed in the Times (2/20/20) explaining what motivates their insurgency, and why they keep pursuing a peace deal with the US:

We did not choose our war with the foreign coalition led by the United States. We were forced to defend ourselves. The withdrawal of foreign forces has been our first and foremost demand.

This is consistent with University of Chicago political scientist Robert Pape’s finding that over 95% of all suicide bombing attacks since 1980 are motivated by a desire to expel foreign occupiers from their homeland (Foreign Policy, 10/18/10). When Matthew Hoh, a former top State Department official in Afghanistan, resigned in protest over continual US involvement in Afghanistan’s decades-long civil war, he noted in his resignation letter that many Afghans are fighting the US simply because its troops are there (Washington Post, 10/27/09; Extra!, 12/09).

Noam Chomsky (The Nation, 5/10/16) pointed out that studies of insurgencies reveal familiar cycles of violence. First, invaders are naturally disliked by the native population, whose resistance elicits increasingly forceful responses by the occupiers, which then escalates native opposition to their occupation until the occupiers either withdraw, or commit sufficient violence to subdue the occupied—up to and including genocide. 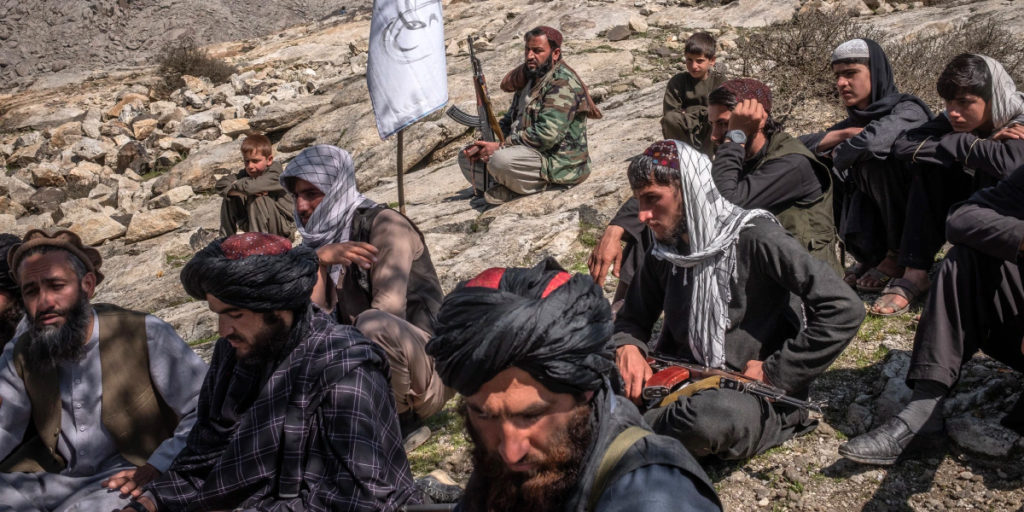 The violence US-backed forces have inflicted on Afghanistan includes horrific torture in CIA black sites, CIA-backed Afghan militias torturing and killing Afghans with near impunity, bombing Afghans with drone strikes, and alliances with brutal warlords that were once suppressed by the Taliban and are despised by the Afghan people. The Costs of War Project (1/20) found that while 2,300 US soldiers have died in the Afghanistan War, over 157,000 people have died since the invasion in 2001 (including 43,000 civilians).

Under international law, those who start a war of aggression, as the US did in Afghanistan, are responsible for all of the atrocities that subsequently occur, including the Taliban’s violence against US soldiers and Afghan civilians to compel US withdrawal. Yet nowhere does the Times article acknowledge that the “military invasion” the Bush administration sought for “immediate revenge” was a war crime in violation of international law. Indeed, seven out of nine references to “violence” in the article are reserved exclusively for violence committed by Afghans, with none referring exclusively to US violence (FAIR.org, 3/29/19). Mashal refers at one point to “instances of US or Afghan forces causing civilian casualties,” only to qualify them as “whether real cases or made up.”

The Times also demonstrated a commitment to the propagandistic narrative of the “War on Terror” when it condemned the Taliban for not showing “remorse for its past cooperation with Al Qaeda,” and using terms like “terrorism” and “terrorist” exclusively as descriptors for Muslims and their activities. The US is arguably the biggest sponsor and perpetrator of terrorism on the planet (FAIR.org, 3/13/19, 2/13/20), and has also cooperated with Al Qaeda with the support of corporate media (FAIR.org, 3/18/15, 1/4/17).

When an article purporting to explain how the Taliban outlasted the US doesn’t mention that the abuses under the illegal US occupation are what revived and currently sustains their insurgency—despite it being Osama bin Laden’s stated strategy to ensnare the US in protracted and expensive wars (Washington Post, 5/3/11; Extra!, 7/11)—it is imperial propaganda. Although it’s too early to say that the Taliban “outlasted” a superpower, because the US hasn’t withdrawn yet, the Times’ analysis ultimately fails because it doesn’t acknowledge how it’s logically impossible for the US to “win” a “War on Terror” in Afghanistan, when its occupation and state terrorism are the Taliban’s secret weapon.