Wealthy and powerful men gather annually at the mysterious Bohemian Grove — but not to plot global domination. 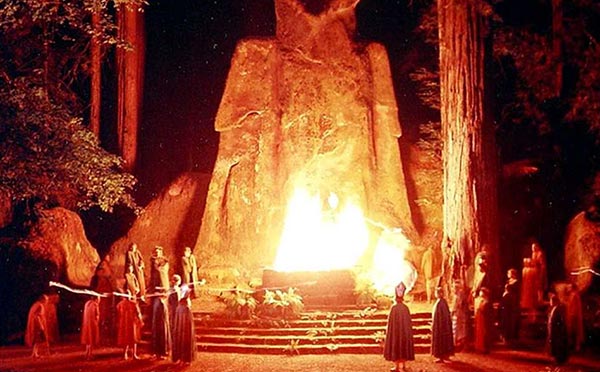 Let’s point our skeptical eye at some of the stories surrounding San Francisco’s Bohemian Club. The membership rolls of this exclusive, men-only social club include US Presidents, captains of industry and banking, military contractors, giants in the arts and sciences, and the absurdly wealthy. Thus, the Bohemians are automatically the subject of charges by some that they are a secret guild of Illuminati, making the decisions that rule the world; manipulating interest rates and choosing political candidates, for example. But from that point the Bohemians deviate from other usual targets of such conspiracy theories, with their unique annual encampment at the Bohemian Grove where they are said to participate in some most un-Illuminati-like behavior, up to and including mock human sacrifice to the pagan god Moloch.

The bare facts are that the Bohemian Club was founded in San Francisco during the gold rush, by some of the social elite in the city’s arts community. By mixing wealthy patrons with artistic luminaries, they ensured that the arts would continue to flourish, while providing patrons and enthusiasts with the ultimate hobnobbing experience. Their motto Weaving spiders come not here, taken from Shakespeare’s A Midsummer Night’s Dream and meaning that no business is to be transacted at the club, was cast in bronze and is prominently displayed on their six story building.

Once a year, Bohemian Club members (often called Bohos) retire to the Bohemian Grove, their 2700-acre retreat in the redwoods of Sonoma County, north of San Francisco, for 16 days, separated into fraternity-style camps. It is at this annual encampment that their most controversial activities are said to take place; everything from bizarre pagan and homosexual rituals, to plans for global domination. The Sonoma County Airport fills with a staggering collection of corporate and military business jets. Grove security is said to be exceptionally tight. The Sonoma County Free Press maintains the Bohemian Grove Action Network to organize round-the-clock protests during the camp.

Conspiracy theorists love the Bohemians. One, a 9/11 conspiracy theory radio host named Alex Jones, speaks extensively of them, sells self-published books and DVDs “exposing” their evil doings, and posts exhaustive YouTube videos (here and here) on the subject. I’ve found his claims to be fairly lightweight, like “world leaders meet at the Grove”. Well, so they do. Some charge that it’s immoral for powerful people to congregate, saying that when powerful people work together, they become even more powerful. Some claim that the “Lakeside Talks” contain confidential information, or that the world’s military-industrial complex is driven by Bohemian committees.

So I decided I wanted to know how much truth there was to these rumors about the Bohemians, if any. The first question to ask is: Can you know? Being an outsider and having to rely on unofficial reports, can you trust that the information you hear is reliable? Would this be like trying to find out what happens in the inner sanctum of a Mormon Temple, or at the highest levels of Scientology, where the only stories are coming from disgruntled former members?

Following the scientific method, we start by recognizing that we can’t prove a negative. There’s no way we can certify that nothing evil ever happens at the Bohemian Club. What we can do is find evidence of any nefarious activities. For example, anti-Bohemian web pages routinely make vague claims like who our presidential candidates are going to be is decided at the Bohemian Grove. Well, what’s the evidence? Do we have tapes of this? Was there a witness? Or is it just pure speculation?

It’s said that Nixon and Bush 43 both announced their running mates at the Bohemian Grove. Well, so what if they did? It’s a fine place to make such an announcement. But that’s a far cry from claiming that an evil committee of Bohemian insiders made the decision and told Nixon and Bush who their running mates would be. I’ve no doubt that plenty of talk happens at the Bohemian Grove that also might as well happen at golf courses and restaurants. That’s normal human interaction, not a conspiracy to rule the world. To justify conspiracy charges, you can’t simply find that the circumstances exist in which it might be convenient to hold a meeting of conspirators. Said meeting must actually take place.

I’m not coming into the Bohemian question totally blind. I’ve actually been to two events at The Bohemian Club in San Francisco. One was a wedding and not a club sanctioned event, but the other was a Steve Miller Band concert held in their 600-seat theater, followed by an open public jam session in a large ballroom. I heard anecdotally that they were trying to get Steve Miller to join. I saw nothing unusual: Lots of books, portrait art, and a really busy cash bar; but then I was only there as a guest and was not invited into any secret meetings. The one thing I learned for sure is that drunken Bohemians onstage with the Steve Miller Band do not add appreciably to the concert experience.

The Bohemian Grove camp is dominated by such theatrical attractions. Each year ends with what they call the High Jinks, an original play written each year for the occasion and performed by a cast of hundreds, and said to be usually quite good and magnificently performed with six-figure budgets. Throughout the camp, so-called Low Jinks are also performed, which can get pretty lowbrow and are the source of the stories about Bohos dressed in drag.

So what about this mock human sacrifice to the pagan god Moloch? It’s well documented from reporters and others who have snuck in and photographed the ceremony, which takes place on the first day of the 16-day camp. A 50-minute dramatic play accompanied by a full orchestra, with huge production value, climaxes with figures cloaked in robes burning a coffin on a sacrificial altar before a huge cement owl. Sounds pretty strange to me. This is what our US Presidents are doing when they visit the redwoods?

The Bohemians call this the Cremation of Care ceremony, and the name of the antagonist in the coffin is Dull Care. It turns out the term dull care comes from a 1919 Oliver Hardy short film of that title, in which the police force is more interested in being lazy than in chasing bad guys. They leave the “dull cares” of their day behind them, and enjoy their freedom. The Bohos thus kick off their encampment by metaphorically throwing their “cares of the day” onto the sacrificial pyre. The theatrics of the robes and the ceremony are certainly consistent with the dramatic theme of the camp. The giant owl merely represents knowledge, and it’s been the club’s symbol since its inception.

Moloch, also spelled Molech, is the Hebrew word for king and was mentioned in the Bible as a Canaanite demigod who required child sacrifices. I couldn’t find any classical references in which Moloch is depicted as an owl, rather he has a human body with the head of a bull. As far as I can tell, any connection between the demigod Moloch and the Bohemians is simply made up by people who are so desperately trying to find something to dislike about them. Burning things, whether it’s witches, festival effigies, dull cares, or magnesium engine blocks happens in all cultures all around the world without the assistance of Canaanite demigods. I’m left with the null hypothesis here: That the Cremation of Care ceremony is nothing more than the Bohos say it is. Interesting how easy it is to make something sound weird when you omit details like the weird cloaks are the costumes of characters in a play, not the ceremonial garb of Bohemian elders.

It turns out that the conspiracy story most often told about the Bohemians is actually true: That the Manhattan Project was planned there, to develop the first atomic weapons. The Bohemian Grove property is vacant 49 weeks out of the year, and when it is, it’s available for private use by members. In September of 1942, Dr. Edward Teller, a club member, reserved the grove and held his meeting there. No other Bohemian Club members were present. So although it’s factually true that the Manhattan Project was planned at the Bohemian Grove, the obvious implication that it was a Bohemian Club project planned by Bohemian Club members is patently false. (By the way I once saw Dr. Teller when I was at the Lawrence Livermore National Laboratory, a fun story, I’ll tell you sometime.)

So you’ve got to wonder, if there’s nothing evil going on, what’s it’s really all about? Why do these wealthy, powerful men go into the woods and act like drunken frat boys from the drama club? If they’re not there to plan global domination, why bother? These are men whose time is worth something; they’re hardly going to go screw around at the Bohemian Grove without a good reason. William Domhoff from the Department of Sociology at UC Santa Cruz came up with five reasons in his doctoral dissertation studying the behavior of the Bohemians:

1. Physical proximity is likely to lead to group solidarity.

2. The more people interact, the more they come to like each other.

3. Groups seen as high in status are more cohesive.

4. The best atmosphere for increasing group cohesiveness is one that is relaxed and cooperative.

And to explain why these first four are useful:

5. Social cohesion is helpful in reaching agreement when issues are introduced into experimental groups for resolution.

Basically, it’s a giant team building exercise. Think back to the club motto: Weaving spiders come not here. The Bohemian Club is not a place to do business; it’s a place to build and strengthen the relationships you’ll need when it comes time to do business out in the real world. The suggestion that the Bohemian Grove is really just a large-scale team building exercise is supported by the fact that their security is not anything like what it’s popularly rumored to be. In 1989, Philip Weiss, writing for Spy Magazine, strolled on into the Grove and reported the following:

The sociologists who had studied the place were right; there was no real security… I took care to blend. I outfitted myself in conservative recreational wear… I always carried a drink, and I made it a point to have that morning’s Wall Street Journal or New York Times under my arm when I surfaced… Thus equipped, I came and went over 7 days during the 16-day encampment, openly trespassing in what is regarded as an impermeable enclave and which the press routinely refers to as a heavily guarded area. Though I regularly violated Grove rule 20 (“Members and guests shall sign the register when arriving at or departing from the Grove”), I was never stopped or questioned… Indeed, I was able to enjoy most pleasures of the Grove, notably the speeches, songs, elaborate drag shows, endless toasts, pre-breakfast gin fizzes… and other drinks — though I didn’t sleep in any of the camps or swim naked with likeminded Bohemians in the Russian River at night.

I conclude that conspiracy charges against the Bohemian Club are vague, implausible, and without any supporting evidence. The null hypothesis, that it is simply a team-building event among wealthy and powerful men interested in the arts and otherwise, is well evidenced and consistent with everything that’s publicly known about them. Of those who say there’s more to it, I’m going to remain skeptical.

Brian Andrew Dunning (born 1965) is an American writer and producer who focuses on science and skepticism. He has hosted a weekly podcast, Skeptoid, since 2006, and he is an author of a series of books on the subject of scientific skepticism, some of which are based on the podcast.