Sarah Harrison, who was a section editor for WikiLeaks, Daniel Domscheit-Berg, a former spokesperson, and Jacob Appelbaum, a digital activist who represented WikiLeaks at conferences, are targeted as “co-conspirators” in the indictment [PDF], though neither have been charged with offenses.

No charges were added, however, it significantly expands the conspiracy to commit computer intrusion charge and accuses Assange of conspiring with “hackers” affiliated with “Anonymous,” “LulzSec,” “AntiSec,” and “Gnosis.”

The computer crime charge is not limited to March 2010 anymore. It covers conduct that allegedly occurred between 2009 and 2015.

Prosecutors rely heavily on statements and chat logs from Sigurdur “Siggi” Thordarson and Hector Xavier Monsegur (“Sabu”), who were both FBI informants, in order to expand the scope of the prosecution.

In March, Judge Anthony Trenga dismissed the grand jury in Alexandria, Virginia, that was investigating WikiLeaks. U.S. Army whistleblower Chelsea Manning, who refused to testify before the grand jury, was released from jail after spending about a year in confinement for “civil contempt.” She was still ordered to pay $256,000 in fines.

Activist Jeremy Hammond, who was sentenced to 10 years in prison for his involvement in the hack against the intelligence consulting firm Stratfor, refused to testify as well. Trenga ordered his release, and he was transferred back into the custody of the Bureau of Prisons.

Prosecutors accuse Assange and other WikiLeaks staffers of engaging in “efforts to recruit system administrators” to leak information to their media organization.

“To encourage leakers and hackers to provide stolen materials to WikiLeaks in the future, Assange and others at WikiLeaks openly displayed their attempts to assist Snowden in evading arrest,” the indictment declares.

It notes Harrison (“WLA-4”) traveled with Snowden to Moscow from Hong Kong, leaving out the part where the State Department revoked his passport and trapped him in Russia.

During an interview for “Democracy Now!” in September 2016, Sarah Harrison said WikiLeaks understood Snowden was in a “very complex legal and political situation” and needed “some people to assist with technical and operational security expertise.”

“I went over there, as the person on the ground in Hong Kong, to help him, not only for him, himself, because he had clearly done something so brave and deserved the protection, I felt, but also for the larger objective to try and show that despite [President Barack] Obama’s war on whistleblowers, that actually there was another option.”

Harrison added, “At the time, the Obama administration was intent upon putting alleged source Chelsea Manning into prison for decades — as she is now in prison for 35 years — and we really wanted to try and show the world that there are people that will stand up, there are people that will help. And The Guardian, for example, did not give any additional help to Edward Snowden as a source, as a person there, and we wanted to show there are publishers that will help in these scenarios.”

Prosecutors note WikiLeaks booked Snowden on “flights to India through Beijing” and Iceland as examples of how Assange engaged in an alleged conspiracy.

At the annual Chaos Computer Club conference in Germany on December 31, 2013, Assange, Appelbaum, and Harrison participated in a panel discussion called, “Sysadmins of the World, Unite! A Call to Resistance.” (Assange appeared via video.)

The indictment criminalizes Assange’s speech in support of Snowden and any future whistleblowers and twists his words into a prime example of WikiLeak “encouraging” the “theft of information” from the U.S. government.

Prosecutors even omit particular words to make the message Assange shared seem more nefarious than an endorsement of radical transparency.

But here is the full quote:

…And we can see that in the cases of the famous leaks that WikiLeaks has done or the recent Edward Snowden revelations, that it’s possible now for even a single system administrator to have a very significant change to the—or rather, apply a very significant constraint, a constructive constraint, to the behavior of these organizations, not merely wrecking or disabling them, not merely going out on strikes to change policy, but rather shifting information from an information apartheid system, which we’re developing, from those with extraordinary power and extraordinary information, into the knowledge commons, where it can be used to—not only as a disciplining force, but it can be used to construct and understand the new world that we’re entering into. 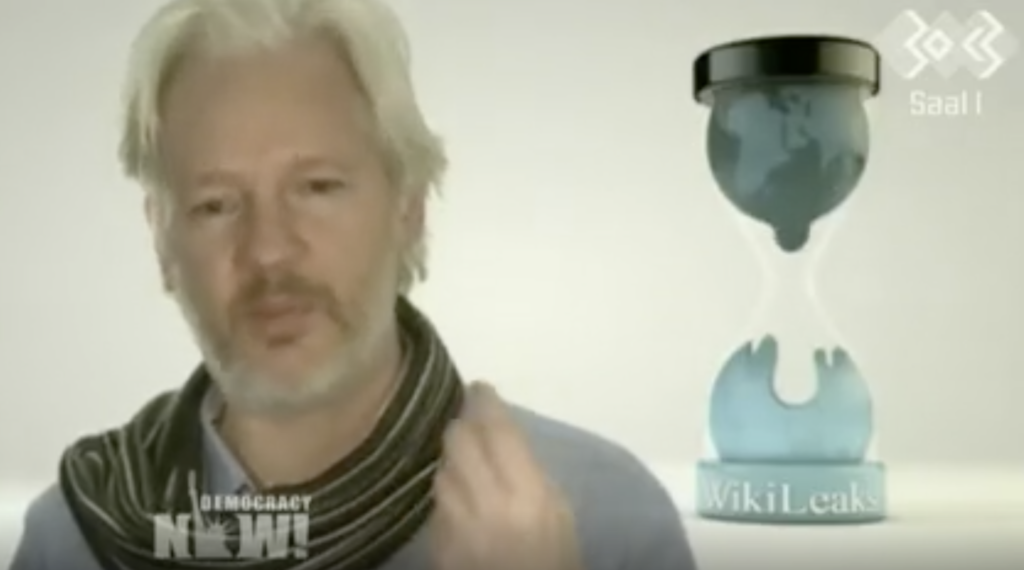 Assange encouraged young people to “join the CIA. Go in there. Go into the ballpark and get the ball and bring it out—with the understanding, with the paranoia, that all those organizations will be infiltrated by this generation, by an ideology that is spread across the Internet. And every young person is educated on the Internet.”

“There will be no person that has not been exposed to this ideology of transparency and understanding of wanting to keep the Internet, which we were born into, free. This is the last free generation,” Assange added.

Appelbaum is singled out for saying Harrison “took actions” to protect Snowden, and “if we can succeed in saving Edward Snowden’s life and to keep him free, then the next Edward Snowden will have that to look forward to. And if we look also to what has happened to Chelsea Manning, we see additionally that Snowden has clearly learned.”

This is a fairly innocuous observation numerous people in the news media, including this author, have shared. It means if whistleblowers do not believe they will be punished with decades of prison or forced to flee their home country then we will have more whistleblowers because they will not believe it so dangerous to come forward.

At no point does the Justice Department attempt to connect the alleged “recruitment” of “hackers” or “leakers” to an actual individual, who heard these words and acted upon them.

Of course, the Justice Department refuses to accept the public benefit that came from Snowden’s disclosures. He still faces an indictment for allegedly violating the Espionage Act, which is why he remains in Russia, where he obtained asylum in 2013.

On May 6, 2014, the indictment alleges Harrison “sought to recruit those who had or could obtain authorized access to classified information and hackers to search for and send the classified or otherwise stolen information to WikiLeaks by explaining, ‘from the beginning our mission has been to public classified, or in any other way, censored information that is of political, historical importance.’”

It is one of the clearest indications that the “conspiracy” charge is a not-so-subtle effort to criminalize the journalism of an adversarial media organization that the United States has spent the last decade working to destroy. At no point in this statement does Harrison ask any specific persons to steal information.

If what Harrison did—and by association, Assange supported—is a crime, then there are countless news media organizations which pride themselves on publishing documents they obtain from sensitive sources that must worry they are opening themselves up to prosecution if they boast about their work in a public setting.

The section of the indictment on Assange’s alleged role in “conspiring” with “hackers” mentions a “Teenager,” who Assange met in Iceland. This individual is Sigurdur “Siggi” Thordarson.

As Wired Magazine reported, “When a staff revolt in September 2010 left the organization short-handed, Assange put Thordarson in charge of the WikiLeaks chat room, making Thordarson the first point of contact for new volunteers, journalists, potential sources, and outside groups clamoring to get in with WikiLeaks at the peak of its notoriety.”

Thordarson was fired from WikiLeaks in November 2011 after the media organizations discovered he embezzled about $50,000.

After the FBI asked to talk with him in person following his termination, Thordarson “begged the FBI for money.” Agents initially ignored his requests, but eventually they paid him $5,000 for “the work he missed while meeting with agents” in Alexandria, Virginia, where the grand jury investigation was empaneled.

In 2013, WikiLeaks stated, “Because of requests from people close to him and his young age [Thordarson] was offered the opportunity to repay the stolen funds, which amounted to about $50,000. When it became clear he would not honor the agreement the matter was reported to the Icelandic Police.”

Thordarson apparently embezzled funds from several other organizations in Iceland that were not related to WikiLeaks. The Icelandic authorities process charges of embezzlement.

“It has materialized that the individual has engaged in gross misrepresentations of different types to obtain benefit from a range of parties,” WikiLeaks added. “We will not identify him by name in light of information that he has recently received institutional medical treatment.”

“In light of the relentless ongoing persecution of U.S. authorities against WikiLeaks, it is not surprising that the FBI would try to abuse this troubled young man and involve him in some manner in the attempt to prosecute WikiLeaks staff. It is an indication of the great length these entities are willing to go that they will disrespect the sovereignty of other nations in their endeavor. There is strong indication that the FBI used a combination of coercion and payments to pressure the young man to cooperate,” WikiLeaks contended.

Hammond was the target of an FBI operation. As Dell Cameron previously reported for the Daily Dot, chat logs, surveillance photos, and government documents showed it was Monsegur who introduced Hammond to a hacker named Hyrriya, who “supplied download links to the full credit card database as well as the initial vulnerability access point to Stratfor’s systems.”

According to Hammond, he had not heard of Stratfor until Monsegur brought the firm to his attention. Monsegur transferred the details for at least two stolen credit cards.

In December 2011, Monsegur gave “AntiSec” or the group of hackers targeting Stratfor access to the private intelligence firm’s systems. He pushed Hammond and others to “unknowingly transfer ‘multiple gigabytes of confidential data’ to one of the FBI’s servers. That included roughly 60,000 credit card number and records for Stratfor customers that Hammond was ultimately charged with stealing,” according to Daily Dot.

Anthropologist Gabriella Coleman wrote in her book, Hacker, Hoaxer, Whistleblower, Spy: The Many Faces of Anonymous, that AntiSec went to the WikiLeaks internet relay chat server. Monsegur was largely unaware. A deal was made to provide files from Stratfor to WikiLeaks.

When talking to WikiLeaks,” Hammond recounted to me, “they first asked to authenticate the leak by pasting them some samples, which I did, [but] they didn’t ask who I was or even really how I got access to it, but I told them voluntarily that I was working with AntiSec and had hacked Stratfor.” Soon after, he arranged the handoff. When Sabu found out, he insisted on dealing with Assange, personally. After all, he told Hammond, he was already in contact with Assange’s trusted assistant “Q.”

According to Hammond, Monsegur attempted to entrap WikiLeaks by suggesting the organization pay him “cash for the leaks.” But WikiLeaks already had the documents they planned to publish.

The U.S. government had a deadline in June 2019 for submitting an extradition request. It seems improper to add these substantial details to the request, especially since a one-week hearing was already held.

While the conspiracy charge includes sensational claims of collaboration with hackers, it is no less of a political charge than the seventeen Espionage Act offenses Assange faces for publishing information.

The additional sections in the indictment represent an attempt to give the illegitimate prosecution a greater veneer of criminality. Unfortunately, it does not take much to scrape it off and expose the contempt for press freedom that still lies behind this vindictive prosecution.