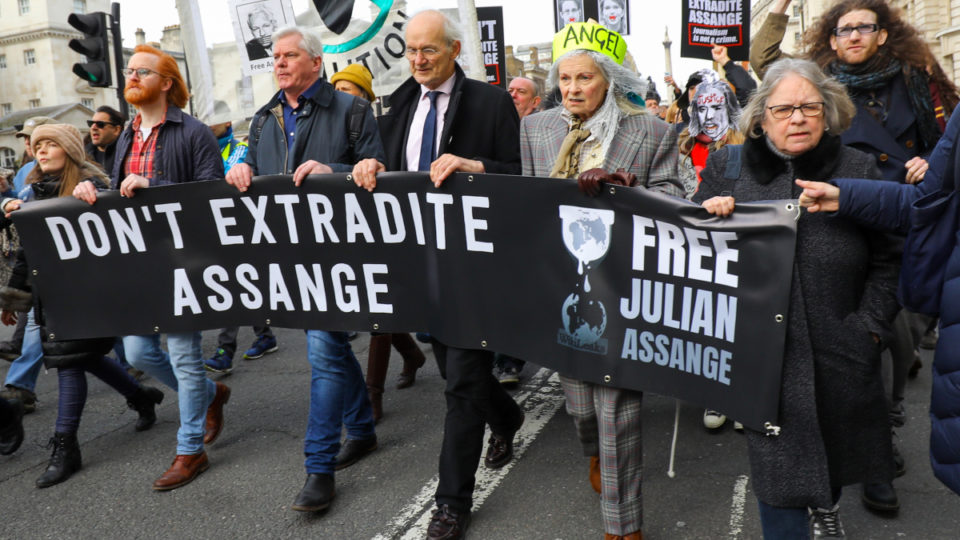 Hundreds gathered in London to show their support for Julian Assange ahead of his hearing on 27 Jul 2020. AAP.

26 Jul 2020 – Julian Assange is expected to appear over video link at Westminster Magistrates’ Court’s hearing on Monday (27 July), despite medical advice that he risks contracting COVID-19. A lung infection combined with a pre-existing condition and the risk of exposure to COVID-19 had prevented him from attending recent hearings.

For the past seventeen weeks, Julian Assange has not been able to meet with his lawyers to prepare his extradition case.

The US extradition hearing against Assange began in February and will resume on 7 September at The Old Bailey in central London for three weeks. It is unclear whether Assange will be permitted to meet with his lawyers before the extradition hearings resume.

WikiLeaks Editor-in-Chief Kristinn Hrafnsson said “Julian has not been able to see his lawyers for seventeen weeks. The computer supplied to him after over a year of asking has its keys glued down and the typing function is disabled. The case material consists of tens of thousands of pages, and Julian cannot even type up notes or instructions for his lawyers. Each and every step of the way, the tools Julian should have to be able to put up a fight are being taken away from him. I call on UK prisons minister Robert Buckland to take every step necessary to reverse restrictions that are preventing Julian from being able to take part in and prepare his legal defence.”

Julian Assange is half-way through the US extradition case, in which he is accused of receiving and publishing leaks from whistleblower Chelsea Manning documenting war crimes and human rights abuses. The prosecution concerns the 2010 publication of the Collateral Murder Baghdad helicopter gunship war crimes, US embassy correspondence, as well as the publications about Guantanamo Bay and the Iraq and Afghan wars. Julian Assange faces 175 years in prison in the United States if convicted.

US prosecutors say that Julian Assange will not be able to rely on US constitutional free press protections because he is not a US citizen. According to reports in The Washington Post last year, several prosecutors who worked on the investigation disagreed with the Trump administration’s decision to prosecute him under the 1917 Espionage Act.

According to former officials, the Obama Administration discontinued efforts to prosecute Julian Assange for the so-called “Manning Leaks” in 2013, because of the press freedom implications. The defence argued in February that the decision to indict Assange under the Trump Administration is politically motivated, and comes amidst a general crackdown on press freedoms in the United States.

Press freedom organisations agree. With the US prosecution of Assange a new precedent is set that criminalises normal journalistic practices. The case is already having a chilling effect. The decision to indict Assange means non-US journalists working in their home countries are liable to prosecution in the United States, where they can be imprisoned for doing their jobs.

Barristers Edward Fitzgerald QC (Doughty Street Chambers) and Florence Iveson (Matrix Chambers) will be in court appearing for the defence.

Kristinn Hrafnsson will be available for interviews after the hearing.