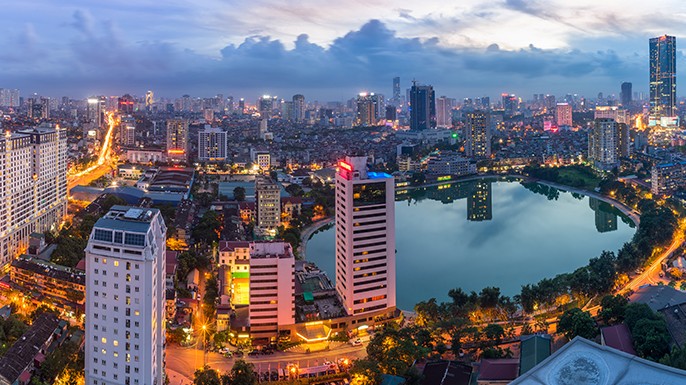 9 Jul 2020 – Vietnam has been lauded as an emerging COVID-19 success story with the country reporting low counts and no coronavirus-related deaths during the country’s outbreak. We are taking a closer look at the country’s response in order to better understand its success in controlling its epidemic as well as how the country plans to maintain that control in the future.

Vietnam’s first cases of COVID-19 were reported on January 23 – a son and his father who had visited from China. As of today, Vietnam has a had a total of 369 confirmed cases and no deaths according to the COVID-19 dashboard by the Center for Systems Science and Engineering at Johns Hopkins University. These low numbers are particularly impressive as the country has a large population as well as limited income and resources compared to other countries suffering; Vietnam has a population of 97 million people and is considered a low-middle income country with limited healthcare capacity compared to other countries in the region. The country has also had no community transmission in the last three months – all new cases have been importations. 90% of all cases thus far have successfully recovered.

In order to understand how Vietnam succeeded during this outbreak, it’s important to look back at how Vietnam responded to previous disease outbreaks and how their investments in preparedness have impacted these responses. For example, during the response to Severe Acute Respiratory Syndrome (SARS) in 2003, the country prioritized population health over concerns for the economic impact of its response. Officials deployed a multi-sector response incorporating military, public security services and grassroot organizations while ensuring that transparent risk communication and effective community mobilization were emphasized throughout the outbreak. These lessons were certainly pulled into its current strategy. The country has also faced other outbreaks from which it drew similar lessons including Middle East Respiratory Syndrome, avian influenza, measles and dengue. Partners such as Gavi and the United States Centers for Disease Control and Prevention have also invested in the country’s health system capacities long-term.

Vietnam began preparations for the outbreak in earnest as COVID-19 cases rose in its neighbor, China. Screenings for COVID-19 amongst passengers at airports began on January 11, 2020 – the day after China reported its first death – and mandatory quarantine upon arrival for passengers from high-risk areas was soon implemented. The Health Ministry convened a response strategy meeting with the World Health Organization and other partners on January 15. Schools were closed the same month. A National Response Plan and a National Steering Committee on Epidemic Prevention was in place before the end of January.

In February and March, travel restrictions became even more strict with flights to China and other high risk countries suspended, and quarantine was mandated for all international arrivals. In late March, the country suspended entry for all foreign international arrivals. Leaders implemented a national lockdown for the first three weeks of April with a suspension of nonessential businesses, but local lockdowns occurred as early as mid-February as a rural community of 10,000 people faced a 20-day lockdown after seven cases were reported.

This early and aggressive action may have paid off, allowing the country to return to normal. Schools have now been open since early May. Other than continued strict mask usage, social distancing and other targeted infection control measures, the country has seemingly fully reopened. In addition to succeeding from a health perspective, the International Monetary Fund estimates that Vietnam will face milder economic impacts from the COVID-19 pandemic compared to other countries in the region due to leaders’ early and aggressive response to the outbreak which allowed the country to successfully reopen sooner.

One common thread of praise for Vietnam has been the country’s emphasis on case finding and isolation. While initial testing was limited to symptomatic individuals who may have had a recent travel exposure or other contact with a confirmed case, testing capacity was quickly scaled up in order to test other groups. Now, all individuals who go into quarantine are tested upon entry and exit from quarantine. Testing is also done with people who frequent high risk settings such as hot spot communities, wholesale markets and industrial zones. By the end of April, testing capacity had expanded to allow up to 27,000 samples processed per day and almost 1,000 people were tested for every confirmed case found – far more than New Zealand or Taiwan at the time who were conducting approximately 150 tests per confirmed case found.

Drawing from past lessons, Vietnam has taken a very strong stance of centering risk communication and mobilization of the public in its response strategy. Leaders have utilized language evoking imagery of a country at war against an enemy virus in order to consolidate support and compliance with public health measures among citizens. Mass texts to mobile phones, loudspeaker announcements, street posters, press and social media posts regarding transmission prevention have been utilized early and often to consistently deliver risk communication. Websites and hotlines dedicated to risk communication have also been developed for citizens to actively seek answers to their questions. A now viral song was even developed to teach people about handwashing that can be found here on Youtube.

As we have seen in prior outbreak success stories, Vietnam’s previous investments in preparedness and strong political will have helped the country keep their outbreak largely controlled. However, it should also be noted that Vietnam’s one party government is uniquely suited to make quick unilateral changes that may not be suited for other styles of governance. Regardless, the international community should continue to watch Vietnam in order to glean lessons learned and evaluate their potential use in other contexts, particularly the country’s effective use of contact tracing, testing and risk communication.

Outbreak Observatory aims to collect information on challenges and solutions associated with outbreak response and share it broadly to allow others to learn from these experiences in order to improve global outbreak response capabilities.