Assange Appears in Court, as Lawyers Warn Case May Be Delayed by New US Indictment 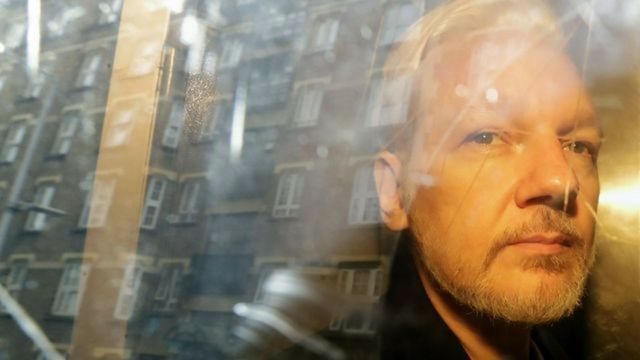 WikiLeaks founder Julian Assange as he is transported in a police vehicle to a hearing.  [Credit: AP Photo/Matt Dunham]

28 Jul 2020 – WikiLeaks founder Julian Assange’s case management hearing yesterday continued the travesty of legal due process to which he has been subjected for more than a decade.

The journalist and publisher is fighting extradition to the United States, where he faces politically motivated frame-up charges of espionage with a combined potential sentence of 175 years. He has not attended hearings via videolink for the last three months on the advice of doctors, due to his fragile state of health and the threat of exposure to coronavirus.

At the previous hearing on June 29, District Judge Vanessa Baraitser had scolded Assange for not being present, demanding medical evidence to justify his non-appearance in future. But yesterday, Baraitser ruled the hearing could go ahead without Assange after Belmarsh prison disrupted his plans to attend. Prison authorities claimed to have forgotten to arrange videolink facilities for the world-famous political prisoner.

When Assange was finally produced via videolink he appeared tired and downcast, according to reporters in the court room.

The brief exchanges between Fitzgerald, Baraitser and prosecuting lawyer Joel Smith, centred on the superseding indictment against Assange issued by the US Department of Justice on June 24.

The new indictment is based on the testimony of Sigurdur Thordarson, described by WikiLeaks as a “sociopath, convicted conman and sex criminal involved in an FBI entrapment operation against WikiLeaks.” It alleges that Assange recruited and incited hackers against a range of classified, official, and private computers between 2009 and 2015. It contains no new charges but significantly expands the scope of allegations against WikiLeaks, deepening the assault on freedom of the press being waged by the US government.

Assange’s support for whistleblower Edward Snowden and transparency of information are alleged in the superseding indictment to constitute solicitation and theft of classified information. Former WikiLeaks section editor Sarah Harrison and former WikiLeaks spokesperson Jacob Applebaum are targeted on the same basis.

But the new indictment had not been served in the UK courts at the time of the last hearing (June 29) and had still not been submitted as of yesterday. Baraitser noted, “As it stands no further superseding indictment is before this court.” Smith responded for the prosecution that “It has been disclosed to the defence” and Baraitser confirmed, “It has only been disclosed to the court via email from the defence but not formally.”

Smith said that he could not commit to a timeline for serving the new indictment, before absurdly claiming that the “usual procedures” would be followed. There is nothing “usual” about this case, including the procedures surrounding the new indictment. As Fitzgerald said during the hearing, “We’ve had it sprung on us.”

Kristinn Hrafnsson, Editor-in-chief of WikiLeaks, explained in a statement yesterday, “What the US is doing is truly unprecedented. A new indictment is being introduced halfway into extradition proceedings, which have been a year in the making. The Assange extradition case started in February and was scheduled to resume in May but was then forced to adjourn until September due to the COVID lockdown.

“The ‘new’ superseding indictment actually contains nothing new. All the alleged events have been known to the prosecution for years. It contains no new charges. What’s really happening here is that despite its decade-long head-start, the prosecution are still unable to build a coherent and credible case. So, they’ve scrapped their previous two indictments and gone for a third try. They are wasting the court’s time and flagrantly disregarding proper process.”

As it stands, the UK courts are continuing with Assange’s extradition process based on an outdated indictment. The new version has been significantly adjusted and can only raise new and substantial legal issues that must be responded to. The defence are due to serve their skeleton argument on August 25. At the last case management hearing, Summers noted that that the superseding indictment “has the obvious capacity to derail the September date [for the next phase of the hearing].”

Fitzgerald told the court yesterday that it would be “improper” if the US government’s actions led to a delay in the case, particularly beyond the November US presidential election, in which he expected Assange to serve as a political football. He continued, “We are concerned about a fresh request being made at this stage with the potential consequence of derailing proceedings and that the US attorney-general is doing this for political reasons.”

Baraitser told him to “reserve his comments” on the new request, as it had not yet been served.

Fitzgerald indicated the defence may need a fourth week to fully present their arguments during the second phase of the extradition hearing—currently scheduled to last three weeks. Smith said that chief lawyer for the prosecution, James Lewis QC, would not be available for a fourth week and Baraitser agreed that it would be a “real concern” for the court if the case stretched to an additional week. Both parties agreed the court could decide later if a fourth week would be needed.

Journalists and monitors from political, legal, and medical organisations attempting to access the court via conference call were again unable to hear proceedings. The audio quality is routinely terrible, but on this occasion not even snatches of conversation where audible since, for the second time, the call was somehow left on hold after the adjournment. Space in the court is still strictly limited by social distancing measures.

As Assange appeared in court yesterday from Belmarsh prison, his partner Stella Morris gave evidence in a Spanish court over the spying activities of UC Global. The Spanish security company was hired by the CIA to spy on Assange and his closest associates during his final years of political asylum at the Ecuadorian embassy in London. It recorded Assange’s privileged meetings with lawyers, and his private consultations with medical doctors and journalists. The activities of UC Global, including plans to kidnap or murder Assange, expose the criminal and all-encompassing character of the US vendetta against Assange and WikiLeaks.

Assange’s final case management hearing will take place at 10am at Westminster Magistrates Court on August 14, ahead of the resumption of the extradition hearing proper on September 7 at Central Criminal Court. It was agreed that Assange, the judge, the defence, and the prosecution will all attend in person, but it remains unclear what the arrangements will be for the public, press and international observers.