In Act of High Seas Piracy, US Hijacks Iranian Oil Bound for Venezuela

19 Aug 2020 – The US interdiction of oil shipments bound from Iran to Venezuela represents a dangerous escalation of the “maximum pressure” sanctions that Washington has imposed against both countries, raising the threat of armed conflict.

The Department of Justice issued a statement Friday [14 Aug] bragging that it had carried out the “largest-ever seizure of fuel shipments from Iran.” It said that “approximately 1.116 million barrels of petroleum” had been stolen “with the assistance of foreign partners.”

There has been no indication of what “foreign partners” were involved in this act of piracy, but US officials claim that the seizure did not involve military force. Rather, it appears that some combination of threats and bribes were used to convince the Greek owners of the four tankers carrying the fuel— identified as the Bella, Bering, Pandi and Luna, all of them flying Liberian flags–to give it up.

According to the Wall Street Journal, the threats included sanctions against the ships’ owners and crews that would prevent them from accessing US ports, US banks and US dollars. 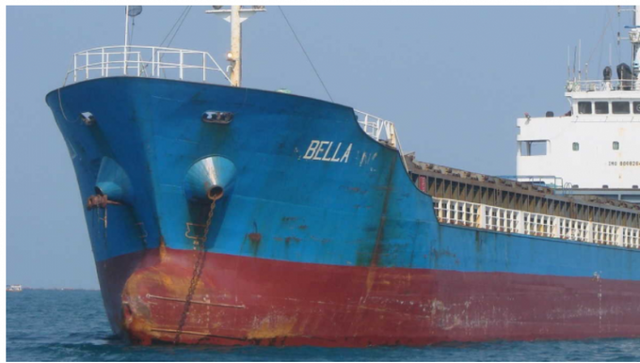 The Greek-owned tanker Bella, one of four ships from which the US hijacked oil bound for Venezuela.

The pseudolegal basis for Washington’s act of high seas piracy was a seizure order issued by a US District Court judge in Washington, DC based upon the Justice Department’s claim that the oil constituted “foreign assets or sources of influence” for the Islamic Revolutionary Guard Corps, a major component of the Iranian military, which Washington has branded as a “Foreign Terrorist Organization.” This designation, imposed without any justification in April of last year, represented the first time that Washington has deemed a branch of another country’s government as “terrorist.”

Since unilaterally abrogating the JCPOA nuclear deal between the major powers and Tehran in 2018, the Trump administration has imposed a crippling economic sanctions regime against Iran tantamount to a state of war, while building up US forces in the region in preparation for military confrontation.

Gloating over the operation, President Donald Trump falsely claimed at a White House press briefing last Friday, “We seized the tankers, and we’re moving them … to Houston.”

While denouncing the US action, Iranian officials have pointed out that the oil had already been sold to Venezuela and did not belong to Iran. Furthermore, the ships themselves were neither owned nor flagged by Iran.

When the seizure order was issued in July, Iran denounced it at the United Nations as an act of “piracy.”

“Any attempt on the high seas to prevent Iran from involving itself in legal trade with any country that it chooses would be an act of piracy, pure and simple,” Alireza Miryousefi, the spokesman for the Iranian mission to the UN, said in a statement. “This is a direct threat to international peace and security and contravenes international law, including the United Nations Charter,” he added.

Iran had warned that any attempt to interdict its own ships would be met with swift retaliation. “The Islamic Republic will reciprocate any hostile action to contain its legal rights and has not allowed any country to take any such action so far,” an official of the Iranian Supreme National Security Council warned.

The Iranian military’s boarding of the tanker Wilda in the Gulf of Oman last week was an apparent response to the US oil seizure. The vessel appeared to be owned by the same Greek shipping company that agreed to surrender the oil from the four tankers targeted by Washington.

The US act of piracy follows Iran’s successful shipment of $46 million worth of gasoline and petroleum products, including diluents needed by Venezuelan refineries to turn the country’s crude oil into gasoline, to the South American country in May. Iranian tankers carried the cargo. Washington reacted with rage toward this breaching of the “maximum pressure” sanctions regime that it has imposed against both Iran and Venezuela.

At the time, Iranian President Hassan Rouhani warned, “If our oil tankers face problems in the Caribbean Sea or anywhere in the world by the Americans, they will face problems reciprocally.” Iranian officials warned that if Iran was prevented from shipping oil, then no country would be able to do so, suggesting a possible blockade of the strategic Strait of Hormuz, through which some 30 percent of sea-borne oil products pass.

The seizure of the Venezuelan-bound oil by means of threats and bribery is just one step from the use of US military force against Iranian shipping that would spark a major new war in the Middle East, which in turn could provoke a global conflagration.

The worldwide crisis that has been triggered by the coronavirus pandemic, most intensely within the United States itself, has done nothing to blunt the aggressive pursuits of US imperialism and militarism.

Iran, with over 345,000 coronavirus cases and more than 20,000 recorded deaths, has been the worst hit country in the Middle East. While Venezuela had initially appeared spared the horrific toll being recorded in Brazil, Peru, Chile and Colombia, it is now recording over 1,000 new cases daily, while reporting less than 300 deaths. The spread of the deadly virus has been accelerated by the return of Venezuelans who migrated to other Latin American countries in search of work as the Venezuelan economy cratered under the impact of falling oil prices and the punishing US sanctions regime.

Washington sees the crisis and the immense human suffering that it entails as another weapon of war, to be exploited in its quest for hegemony over the Persian Gulf and Latin America. Even as millions are infected and hundreds of thousands die, the threat of a global war that could claim the lives of billions only continues to grow.

US military threats against Venezuela have escalated since April, when Trump took the stage at a supposed COVID-19 briefing to announce the dispatch of a naval task force to the Caribbean for the so-called purpose of stopping drug trafficking, in particular, from Venezuela.

Under the phony pretext of narcotics interdiction—90 percent of the world’s cocaine comes out of Colombia, whose right-wing government is Washington’s closest regional ally—the Pentagon has deployed the largest military force in the region since the 1989 US invasion of Panama.

The US military deployment against Venezuela was followed by an abortive invasion at the beginning of May by mercenary units led by ex-US special forces troops. A Venezuelan court last week sentenced two former Green Berets, Luke Denman and Airan Berry, to 20 years in prison for their part in the operation, which was aimed at seizing and killing Venezuelan President Nicolas Maduro. US Secretary of State Mike Pompeo has vowed that Washington will use all means to secure the release of the mercenaries.

US aggression against both Venezuela and Iran, which respectively hold the world’s first and fourth largest oil reserves, is bound up with the strategic confrontation between the US and China, which has cemented ties with both countries.

Iran has become even more of a focus for US military aggression following the revelation last month that Beijing and Tehran had signed a 25-year “Comprehensive Strategic Partnership” agreement involving $400 billion in Chinese investment in Iranian infrastructure in return for guaranteed energy exports. The deal also includes a significant security component, allowing China to deploy some 5,000 security forces to guard its projects, make free use of Iranian bases and build a port on the strategic Strait of Hormuz.

US imperialism is not about to surrender enforcement of its unilateral sanctions regimes against Venezuela or Iran. Significantly, the Trump administration has announced that Elliott Abrams, convicted in connection with the Iran-Contra scandal in the 1980s, will now serve not only as its special representative to Venezuela, where he has led the administration’s unsuccessful attempts at regime change, but as its special envoy to Iran as well.

The appointment signals a shift towards stepped up aggression. Driven by US imperialism’s attempts to offset its crisis and decline by military means, the threat of war against both Iran and Venezuela is sharpened by the domestic crisis of the US itself and may be accelerated by the electoral calendar, with a new war a distinctly possible “October surprise.”