Israel Is in Shock, in a Sickening Show of Hypocrisy 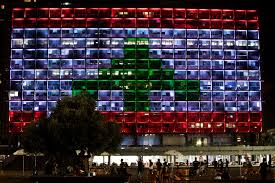 7 Aug 2020 – Official Israel presented itself as shocked at the disaster that struck its neighbor, Lebanon, yesterday. Almost everyone put on a sorrowful face. Except for Richard Silverstein, who writes a blog, Tikkun Olam, no one accused Israel of causing the disaster. Except for Moshe Feiglin and a few other racists, no one expressed satanic joy over it. Fortunately, former Israeli army spokesman Avi Benayahu ran Feiglin out of the race: “With such statements, you don’t belong to the Jewish people,” declared Benayahu, the man of Jewish morality, and the stain was removed.

Benayahu is right: The Jewish state never caused such disasters, and when our enemies fell it never rejoiced. The Israel Defense Forces, whose voice Benayahu was, never such caused destruction and devastation, certainly not in Lebanon, certainly not in Beirut. What does the IDF have to do with the destruction of infrastructure? An explosion in the Beirut port? Why would the most moral army in the world have anything to do with bombing population centers? And so the country’s leaders hastened to offer help to the stricken land of the cedars, such a typical Jewish and Israeli gesture, human, lofty and moving to the point of tears.
True, the Israel Air Force thumbs its nose at Lebanon’s sovereignty and flies through its skies as if they were its own. True, Israel has devastated Lebanon twice in war, but who’s counting. Israel’s president issued a statement of condolences to the Lebanese people, the prime minister and the ministers of foreign affairs and defense said they had “given instructions to offer humanitarian and medical assistance to Lebanon.”

As if all this beneficence was not enough, the mayor of Tel Aviv ordered the municipality building illuminated with the colors of the Lebanese flag. Words fail. All past hatred has been set aside, Israel is now a friend in need to its suffering neighbor. Maybe it was Tu B’Av, the holiday of love, marked yesterday. But still, a vague memory threatens to spoil the how-beautiful-we-are party, which we love so much around here.

Was it not that same defense minister that only last week threatened that same Lebanon with destruction of infrastructure? Didn’t the prime minister also threaten Lebanon? And how does destruction of infrastructure look in Lebanon? Just like what was seen in Lebanon on Tuesday. The sound of thunder shook the city, black smoke billowed over it, destruction and devastation, civilian blood spilled, 4,000 injured at hospital doors, as described in horror by the ambassador of a European country in Beirut, who had previously served in Israel. She was injured Tuesday in the blast and was in shock.

Half of Israel and the entire IDF General Staff know how to recite the acclaimed Dahiya Doctrine. Every second politician has threatened to carry it out. That is our language with Lebanon and Gaza. It’s the doctrine espoused by the Israeli Carl von Clausewitz, former chief of staff Gadi Eisenkot, the current hope of the Israeli left, when he was chief of the Northern Command.

And what is this sophisticated doctrine? It’s the use of disproportionate, unbridled force against infrastructure, the sowing of destruction and shedding of as much blood as possible. “Flattening” – to teach the enemy a lesson “once and for all.” The IDF has tried this more than once in the past, in Lebanon and in Gaza, and it was a dizzying success story. It looks just like what was seen in Beirut on Tuesday.

Not a week had passed since Israel threatened to destroy infrastructure in Lebanon if Hezbollah dared avenge the killing of one of its fighters in a limited military action on the border, and Israel the destroyer becomes Israel the merciful. Would you accept humanitarian aid from such a country? Is there a more sickening show of hypocrisy?

When Israel demolished Dahiya and other neighborhoods in Beirut, the Tel Aviv Municipality building was not illuminated with the colors of the Lebanese flag. When Israel killed thousands of innocent women and children, old and young, in Gaza during the criminal Operation Cast Lead and Operation Protective Edge, the municipality was not lit up in the colors of the Palestinian flag. But on Wednesday we were all so humane, so Lebanese for a moment. Until the next Dahiya.