The Japan Shinzo Abe Has Left Behind

By leaving office now, as modern Japan’s longest-serving prime minister, Shinzo Abe will set the terms of his departure instead of allowing dagger-wielding rivals to do it for him. He will leave behind a country still struggling with fundamental economic problems, but also more prepared to go its own way in the world. 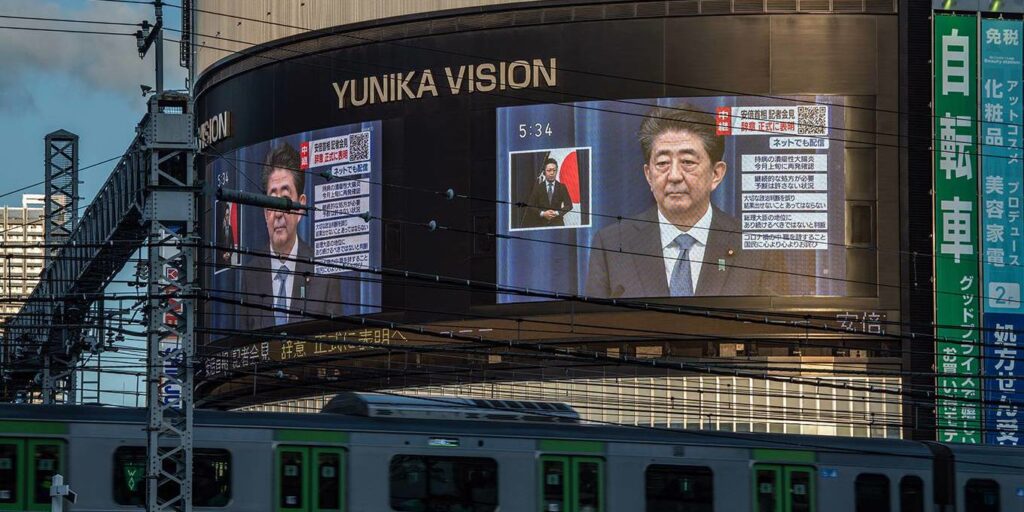 TOKYO, JAPAN – AUGUST 28: A train passes by as Japan’s Prime Minister, Shinzo Abe, is displayed on giant television screens during a press conference in which he announced his resignation on August 28, 2020 in Tokyo, Japan. Shinzo Abe, Japan’s longest serving post-war prime minister, announced his resignation today amid speculation surrounding his health. (Photo by Carl Court/Getty Images)

28 Aug 2020 – Shinzo Abe’s sudden resignation (on health grounds) ends the tenure of Japan’s longest-serving prime minister. The country’s most internationally recognized statesman since 1945, Abe has been, among other things, the world leader most keen on playing golf with US President Donald Trump.

Though he leaves with a still-weak economy, Abe has made Japan stronger and more autonomous in matters of defense and foreign policy. Whoever succeeds him will likely continue on that path, which is good news for proponents of peace in East Asia and of the rules-based international order more generally.

Abe’s current term was set to end in September 2021, but his approval ratings had fallen to historic lows, making another run for the premiership a non-starter. The manner of his departure, after nearly eight continuous years in office, thus reflects an old principle of political life. For a long-serving party leader who knows the end of his political career is nigh, it is better to set the terms of one’s own departure than be pushed out by dagger-wielding rivals.

Since his youth, Abe has suffered from ulcerative colitis, a debilitating condition that forced him to resign once before, in 2007, after serving one year as prime minister. That previous departure also coincided with serious political difficulties, making his return to power in 2012 all the more remarkable. Given two recent well-publicized hospital visits, Abe’s renewed health problems are likely genuine. And yet, with the Tokyo Olympics having been postponed to next summer, it is hard to believe that he would choose to step down now unless he also felt serious political pressure.

From an international perspective, Abe’s loss of popularity may seem surprising, given that his country has suffered fewer than 1,300 COVID-19 deaths and a smaller economic downturn than in the United States or most European countries. But Abe’s government has drawn criticism for erratic communication and a seemingly uncaring economic-policy response to the pandemic. And, after so many years in office, accumulated scandals and a general weariness with the country’s unchanging leadership have caught up with him.

Moreover, there has been growing disappointment about the state of the economy and living standards. Abe’s ballyhooed economic program, “Abenomics,” has consisted of faster monetary expansion, some fiscal stimulus, and talk of pro-growth structural reforms. But the results have been meager, especially from a leader who has won three general elections and long enjoyed strong parliamentary majorities.

Abenomics was billed as a program to overcome deflation, accelerate economic growth, and – in a second phase – boost Japan’s birth rate. While prices have stopped falling, hopes of restoring mild inflation and wage growth have been dashed. While economic growth between 2012 and the current pandemic was slightly better than in the previous decade, that was largely owing to the absence of major shocks on the scale of the 2008 financial crisis or the 2011 earthquake and tsunami. The birth rate remains flat.

To be sure, the Abe government has enacted some small, useful reforms, including a new corporate-governance code, better disclosure rules for companies, higher child-care spending, and tighter limits on dangerously long overtime. But plans for deeper reforms to increase competition have either not materialized or been blocked by vested business interests. Nearly 40% of the workforce remains on short-term, precarious contracts, and although more women work, very few have broken through to leadership positions.

Abe has also failed to achieve his greatest ambition of all: revising Japan’s 1947 constitution to normalize the status of the country’s armed forces and remove the document’s famous pacifism clause (Article 9). The Japanese public remains opposed to such a change, and Abe’s Liberal Democrats (LDP) have commanded their strong parliamentary majorities in coalition with the centrist Buddhist group Komeito, which has pacifist roots. Because a constitutional revision requires a two-thirds majority in each house of parliament and a simple majority in a national referendum, Abe has never been able to realize his dream.

As for his legacy, Abe will be remembered as a traditionalist (in Japanese terms). Within the LDP, he leads a group of “new conservatives” who advocate a strong state, central leadership, established values, and – most of all – a more robust and autonomous foreign and defense policy. On these priorities, he has delivered.

At times, he has pursued a slavishly close relationship with Trump. But he has also sought to carve out a more autonomous role for Japan on issues like trade. In 2017, he led the effort to salvage the 12-country Trans-Pacific Partnership following the Trump administration’s withdrawal from that deal. Japan has also negotiated a bilateral free-trade arrangement with the European Union, and will shortly complete a parallel deal with the United Kingdom.

Abe has also strengthened Japan’s defense relationship with India. By emphasizing a revisionist view of Japan’s wartime history, however, he has brought relations with South Korea – Japan’s closest neighbor and a fellow US security ally – to a new low following that country’s leftward turn.

The race among potential successors within the LDP has been covertly underway for several months. But it is already clear that none of the leading contenders – defense minister Taro Kono, former foreign minister Fumio Kishida, the cabinet secretary Yoshihide Suga, nor even Abe’s old rival, Shigeru Ishiba – will want to soften the country’s foreign-policy stance. If anything, they may compete to appear even stronger on security issues, advocating more military spending, pre-emptive strike capabilities against North Korean missile threats, or tougher action against Chinese maritime incursions in the East China Sea.

No Japanese prime minister since the end of the American occupation in 1952 has been able to contemplate seriously any kind of rupture with the US. But, recognizing that America has become a less reliable and cooperative ally, especially under Trump, Abe has prepared the ground for Japan to develop a more independent voice as it builds its own network of partners around the world. That strategy is here to stay.

Bill Emmott is a former editor-in-chief of The Economist.