The Show Trial of Julian Assange: A Cruel and Pseudolegal Farce 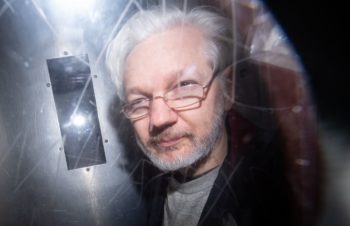 Fifty weeks in prison for violating his bail: Julian Assange in January 2020 in a police van on the way to London’s maximum security Belmarsh prison.
Dominic Lipinski/Press Association Images/Keystone

15 Aug 2020 – Yesterday’s hearing in London made clear, if any further proof was needed, that the prosecution of Julian Assange is a shameful and degrading show trial, intended to railroad an innocent man to prison or death for revealing the crimes of US imperialism.

In a botched proceeding, Assange was initially not brought to the video room to join the proceedings, the US prosecutors failed to show up after getting the hearing time wrong, and, with only five observers allowed in the courtroom, every journalist and legal observer who tried to listen to the hearing remotely was not admitted.

Assange, the world’s most famous political prisoner, has been denied access to his attorneys since March, and he has not seen his family or young children since then.

In the most egregious move of all, just two days before the hearing, the US Justice Department, under the right-wing authoritarian ideologue William Barr, issued a completely new indictment against Assange, which the accused had not been able even to read before the hearing.

“The US government seems to want to change the indictment every time the court meets, but without the defense or Julian himself seeing the relevant documents,” said WikiLeaks Editor-in-Chief Kristinn Hrafnsson.

Less than 24 hours before the start of the final procedural hearing and less than four weeks before the resumption of the extradition trial, Barr signed a new 33-page request to have Assange sent to the US from the UK.

The superseding indictment, upon which the new extradition request is based, was released on June 24, yet US prosecutors refused to confirm over the course of two hearings, on June 30 and July 28, precisely when it would be introduced into the UK legal proceedings.

The new extradition request was brought after Assange’s legal team had submitted all of their evidence. The defense argued that to proceed on the basis of a new indictment would amount to an abuse of due process. Judge Baraitser refused the defense request, instead allowing them to apply for a postponement of the hearing.

Assange’s legal team is now confronted with the choice of whether to accept the further sabotage of their client’s case or prolong the endangerment of his life with more months in prison.

Even as the COVID-19 pandemic rages through the UK prison system, Assange remains incarcerated in Belmarsh. Medical experts who have examined him report that his health is deteriorating and he could die in prison.

The new indictment expands the scope of what is branded as criminal activity. The charge of “unauthorized disclosure of defense information” formerly accused Assange simply of “publishing [the Afghanistan and Iraq war logs and the State Department Cables] on the internet.” This has now been expanded to include “distributing” the documents, for example, to other media organizations.

Assange associates Sarah Harrison, Jacob Applebaum and one-time WikiLeaks employee Daniel Domscheit-Berg are now also targeted as “co-conspirators.” Efforts to help a persecuted whistleblower (Edward Snowden) gain asylum and even to speak in defense of his actions are criminalized, as are the most general statements in support of government transparency.

These details make it clear that while Julian Assange has been isolated in prison and unable to meet with his lawyers, the US government has been building its extradition case and expanding the scope of its vendetta against all those who have helped WikiLeaks bring the truth to the people of the world.

Julian Assange, who faces 175 years in federal prison for exposing US war crimes in Iraq and Afghanistan that claimed tens of thousands of lives, is being persecuted as part of an international drive by the ruling elite to criminalize whistleblowers, journalists and political dissent.

The state conspiracy against Julian Assange is the spearhead of a sustained offensive against democratic rights targeting the working class. Assange’s crime in the eyes of his persecutors is his exposure of imperialist war crimes and diplomatic intrigues that galvanized mass oppositional sentiment around the world.

The new indictment was drawn up by Barr, who six days earlier appeared on Fox News to denounce a broad swathe of Trump’s political opponents as “revolutionaries” and “Bolsheviks” intent on “tearing down the system.” Barr gives voice to the real scope of Trump’s plans to impose a presidential dictatorship.

These developments are a searing indictment of all those political forces who either maintained silence or supported Assange’s persecution. This includes the Democratic Party in the United States, which has spearheaded the attack on WikiLeaks as part of its neo-McCarthyite anti-Russia campaign. The Democratic candidates in the 2020 elections, Joe Biden and Kamala Harris, have both been enthusiastic participants in this reactionary and antidemocratic vendetta.

As for the liberal media, led by the Guardian and the New York Times, it has thrown Assange to the wolves. It is significant that not a single major news organization in the US even bothered to report the hearing yesterday. Neither did any of the pseudoleft publications, such as the Nation or Jacobin magazine, report the assault on fundamental rights taking place in the London courtroom.

Political responsibility for the ability of the Trump administration in the US and the Johnson government in the UK to proceed with their joint effort to silence Assange rests with the entire pseudoleft fraternity, who lined up against Assange, recycling the smears and lies of the State Department, Pentagon and CIA over frame-up Swedish allegations, “failure to redact” and other lies.

Those in the official campaign around WikiLeaks who seek to channel the defense of Assange behind appeals to the British Labor “lefts,” trade union bureaucrats and Assange’s chief persecutor, the Democratic Party in the United States, are perpetrating a political fraud that prevents a genuine movement for Assange’s freedom.

The World Socialist Web Site renews the call for the international working class to come to the defense of Julian Assange. The working class must make clear the fundamental link between Assange’s persecution, the defense of democratic rights and the struggle against the capitalist system, which is plunging the world into war and barbarism.

The fight to free Assange is inseparable from the mobilization of a mass political movement in the struggle for socialism against imperialist war, social inequality and the lurch to dictatorial forms of rule.