Trump’s Tantrum against TikTok Is No Laughing Matter 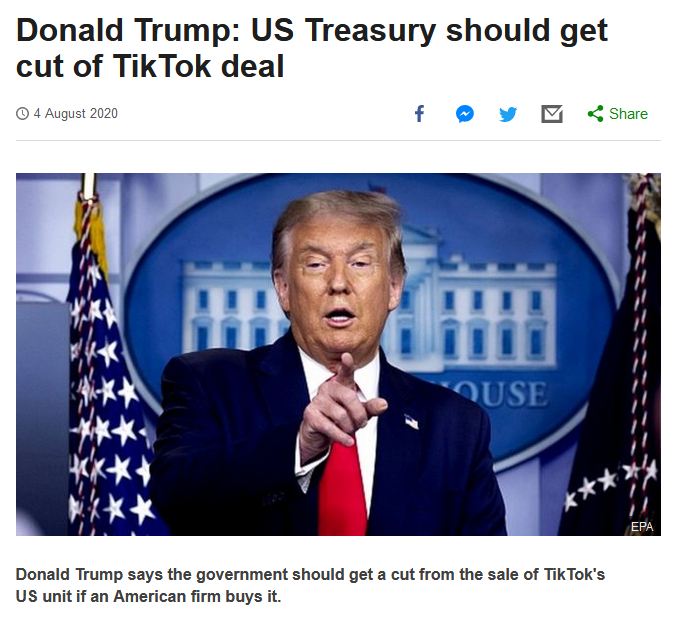 The BBC (8/4/20) reported that Trump’s suggestion was “almost Mafia-like behavior.”

5 Aug 2020 – President Donald Trump has made it clear he would like to ban the video-making app TikTok. Despite being mostly used by younger users to make music or comedic videos, the White House says it is worried about the platform, as the New York Times (8/1/20) explained, “because of the app’s Chinese ownership”: TikTok is owned by the Beijing-based firm ByteDance. The administration has often vilified China as a rival that intends to undermine the United States through underhanded means.

In true Trump fashion, he changed course, declaring he would be satisfied if the company were acquired by Microsoft  (New York Times, 8/3/20)—though he added that he expected the US Treasury to get a cut of the profits, since it was his threat that made the sale possible (BBC, 8/4/20). 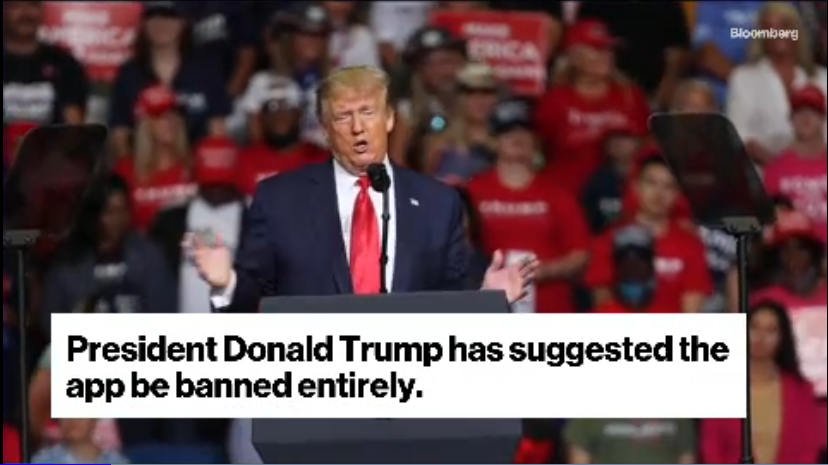 Screengrab from Bloomberg video segment (7/14/20) on “Why TikTok Is Target of So Much US Scrutiny.”

The focus on TikTok has caught many by surprise: Why would the US government care so much about such a seemingly innocuous app? The reasons for Trump’s rage are at once comical and frightening. On the one hand, Trump has found what might appear to be a random media issue to deflect from his various problems (plummeting poll numbers, rising Covid cases, slumping economy), a phenomenon that lends itself to ribbing from satirists and talkshow hosts. But the deeper problem is that he is leveraging his executive position to fight and try to take control of a media group with the excuse of its being foreign, which is both a threat to free speech and free press, and adds to his administration’s pugnacious Sinophobia.

And the reason he has fixated on TikTok, it seems clear, is because of its reported use by young online activists to organize spurious reservations to his Tulsa rally—contributing to his humiliation when the sparse attendance failed to match his boastful expectations. Trump’s use of the power of the federal government to punish media outlets he perceives as having crossed him is part of a disturbing pattern of contempt for the First Amendment’s protection of the press (FAIR.org, 8/1/20). 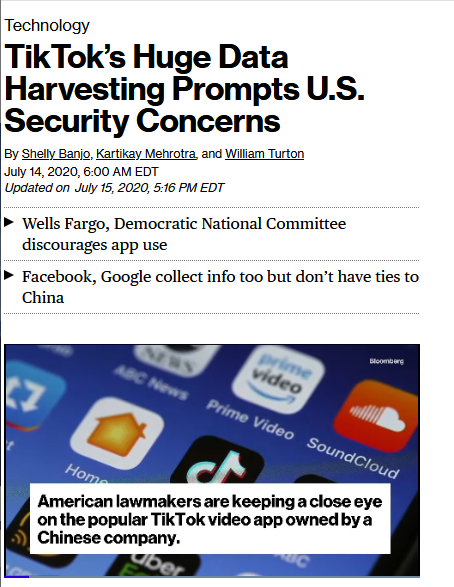 Bloomberg (7/14/20) notes that “security researchers say TikTok’s information-collection practices are consistent with Facebook Inc., Google and other US tech companies looking to tailor ads and services to their users.”

Corporate media have helped bang the drum against TikTok, too. The Independent (12/3/19) reported on claims that the app was loaded with Chinese spyware. Bored Panda (6/25/20) reported on claims that TikTok, while not technically malware, was certainly a “nefarious” app that was “outright evil.” Showing bipartisan anger towards the app’s Chinese origins, the Hill (8/2/20) posted on Twitter a video of Senate Minority Leader Charles Schumer opposing TikTok’s presence in the United States. Bloomberg (7/14/20) sounded the alarm that the app’s data harvesting was a concern of “national security.”

To accuse a free app of engaging in data mining, however, is a bit like running a headline that water is wet. Facebook, Twitter and other networks are free to use, but their owners have grown enormously rich, not through user fees, but through the cultivation of data that users make public, which is incredibly valuable for modern-day internet marketing.

In fact, the book Digital Labor makes the case that social media users engage in a form of “playbor” (play and labor), whereby the recreational activity of using these apps creates material (data and information) that are used for profit, making the user a kind of unpaid laborer creating value. As the Washington Post (7/14/20) explained, TikTok isn’t that different from Facebook in this regard.

What catches the eye of the administration—and some in the media—is the fact that TikTok is Chinese. And this makes it inherently suspicious, as the US government news service Radio Free Asia indicated when it tweeted a cartoon suggesting that the Chinese government was using the video chat service Zoom to spy on people (FAIR.org, 4/17/20). So the narrative becomes clear: When US-based corporations use apps to gather data on people, it’s just regular business, but—as indicated by Trump’s suggestion that Microsoft buying the app would solve the problem—when a Chinese-owned company does it, it’s economic and political warfare. 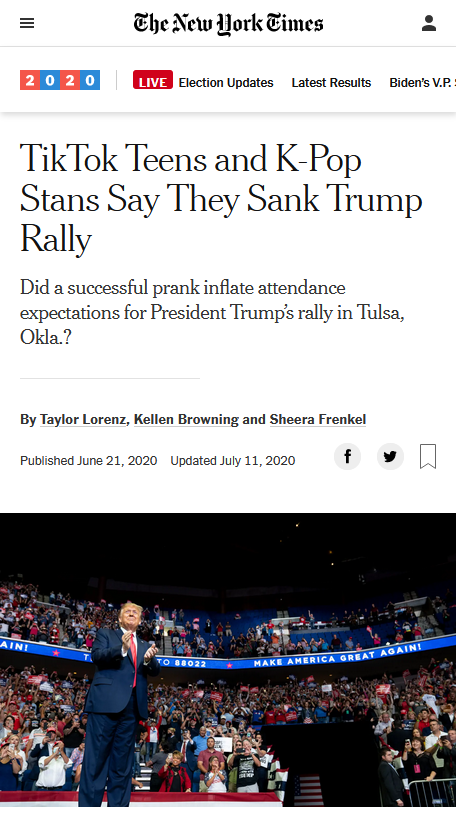 New York Times (6/21/20): “TikTok users and fans of Korean pop music groups claimed to have registered potentially hundreds of thousands of tickets for Mr. Trump’s campaign rally as a prank.”

So when the New York Times (6/21/20) reported that TikTok users organized through the app to reserve tickets for Trump’s much-hyped Tulsa rally, thus helping to thin out the crowd, it gave Trump license to claim he was fighting against foreign intrusion, when he was actually just upset about his embarrassing campaign rally.

Trump’s rage toward TikTok is symptomatic of a president losing his grip on power. Deploying federal troops to suppress Black Lives Matter protests, floating the idea of delaying the election and attacking the US Postal Service (which would be vital in an election during a pandemic) are all textbook cases of a wannabe authoritarian who feels the walls closing in. He especially aims his anger at media, which both deflects from his problems and allows him to paint media coverage of those problems as simply an extension of his political opposition.

The move against TikTok, which is mostly used for entertainment purposes, could be replicated against more fact-based media the administration can’t abide. For example, the South China Morning Post is owned by the Hangzhou-based Alibaba Group ; could a few anti-Trump editorials make the venerated paper a “national security threat”? This isn’t so unthinkable, as the New York Times (2/18/20) reported that the US State Department announced that China’s “five foremost news agencies — Xinhua, CGTN, China Radio, China Daily and the People’s Daily — will officially be treated as foreign government functionaries.” The move came, the paper reported,

at a time when the administration has moved aggressively on multiple fronts to fight what officials describe as extensive Chinese influence and intelligence operations in the United States.

Whatever one thinks of these news organizations, progressives and conservatives alike should agree that the US government, in the interest of free speech and free press, shouldn’t restrict the ability of foreign news organizations to report the news or restrict what information Americans can consume.

A TikTok ban would be another instalment of the kind of anti-Chinese scapegoating Trump has made a part of his rhetoric—China is to blame for our economic woes, and it’s the cause of the pandemic, he has declared to his base, without evidence. He has even attacked Chinese-American CBS journalist Weijia Jiang, insinuating that her loyalties rest with Beijing (CNN, 5/12/20). This debasement of reality has fueled anti-Asian racism. As CBS (7/2/20) reported, there have been more than 2,000 reported incidents of hate crimes against Asian Americans during the pandemic.

There’s another thread here. As FAIR contributor Alan MacLeod noted on Twitter (8/3/20), Microsoft’s share prices soared after Trump changed direction, indicating that Trump’s threats were part of a government-sponsored hostile takeover of a foreign business. Leaving aside any economic debate about such protectionism, the idea that he could use this model against other forms of media is no joking matter.

That Trump is lashing out at some youngsters making music videos is indeed the kind of absurdity his administration has employed that makes satire almost impossible, but the free speech and anti-Asian repercussions of this move are real and dangerous. That some in the media and the Democratic Party have helped Trump in this regard only solidifies this fear.