28 Jul 2020 – A recent spate of reports in US media features US officials accusing Official Enemies Russia and China of “stealing” the US’s coronavirus vaccine research data. To accuse another party of “stealing” something, of course, is to imply unjust deprivation. If my wallet is stolen, it means I no longer possess it or its contents, while someone else does. Does it make sense to describe the alleged actions of Russian and Chinese hackers as a form of “theft”? If so, what kind of “theft” is it? 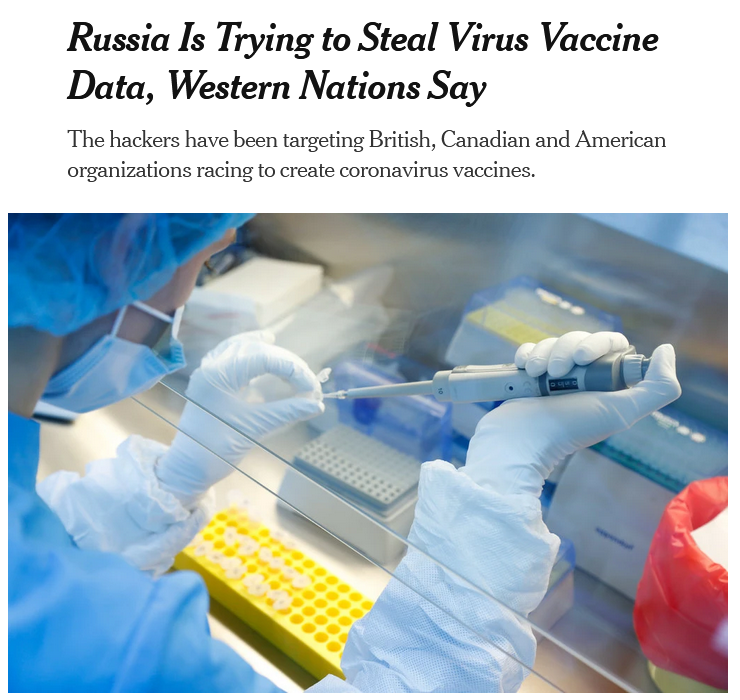 The New York Times (7/16/20) reported that “Russia has aimed much of its recent cyberespionage, like election interference, at weakening geopolitical rivals and strengthening its hand.”

The New York Times’ report, “Russia Is Trying to Steal Virus Vaccine Data, Western Nations Say” (7/16/20), levied the accusations of US, British and Canadian governments that “the Kremlin” is “opening a new front in its spy battles with the West amid the worldwide competition to contain the pandemic.”

The Times story, by national security reporter Julian Barnes, takes it for granted that individual countries around the world are engaged in a ruthless struggle to gain geopolitical advantage by being the first to develop an effective vaccine. That ignores projects like the Inclusive Vaccine Alliance, formed by the German, French, Dutch and Italian governments to speed up development of a vaccine through joint research and investments. The Chinese government, for its part, has declared that its vaccine will be a “global public good,” and has repeatedly insisted on the necessity of “solidarity and cooperation,” in addition to actively cooperating with the Coalition for Epidemic Preparedness Innovations (People’s Daily, 7/10/20).

The day after the Times published these accusations, the Russian government revealed that it had already sealed a deal with AstraZeneca and Oxford University for Russian manufacturing of the potential British vaccine (one of the leading contenders), and claimed that it didn’t need to “steal” state secrets because it would be given to them (Reuters, 7/17/20).

The Times report undermined its own headline when it admitted:

American intelligence officials said the Russians were aiming to steal research to develop their own vaccine more quickly, not to sabotage other countries’ efforts. There was likely little immediate damage to global public health, cybersecurity experts said.

In other words, even if these allegations were true, Western governments have not been deprived of their research. The Times fully admits that this alleged hacking would not harm US public health, but only the profits of US pharmaceutical companies:

Private firms are more at risk than the public, said Mike Chapple, a former National Security Agency computer scientist who teaches cybersecurity at the University of Notre Dame.

“The potential harm here is limited to commercial harm, to companies that are devoting a lot of their own resources into developing a vaccine in hopes it will be financially rewarding down the road,” he said.

The Times also acknowledged that:

The accusations against Russia were also the latest example of an increasing willingness in recent months by the United States and its closest intelligence allies to publicly accuse foreign adversaries of breaches and cyberattacks…. Attributing such attacks, however, is imprecise, an ambiguity that Moscow takes advantage of in denying responsibility, as it did Thursday.

Despite these acknowledgments, the Times nevertheless echoed the certitude of “American experts,” and anonymous government and intelligence officials, about Russian culpability and motives. The Times simply asserted that “the Russian espionage” signals “a new kind of competition between Moscow and Washington akin to Cold War spies stealing technological secrets during the space race generations ago.” Without providing any evidence, anonymous sources assert that Cozy Bear, an alleged Russian cyberespionage group “controlled by Russia’s elite SVR intelligence agency” is trying to “exploit the chaos created by the coronavirus pandemic.”

Despite the Times admitting that US government officials “would not identify victims of the hackings,” the paper speculated that the “primary target of the attacks appeared to be Oxford University in Britain and the British-Swedish pharmaceutical company AstraZeneca.” Note that these are the same groups with whom the Russian government has already announced a deal to manufacture their potential vaccine. 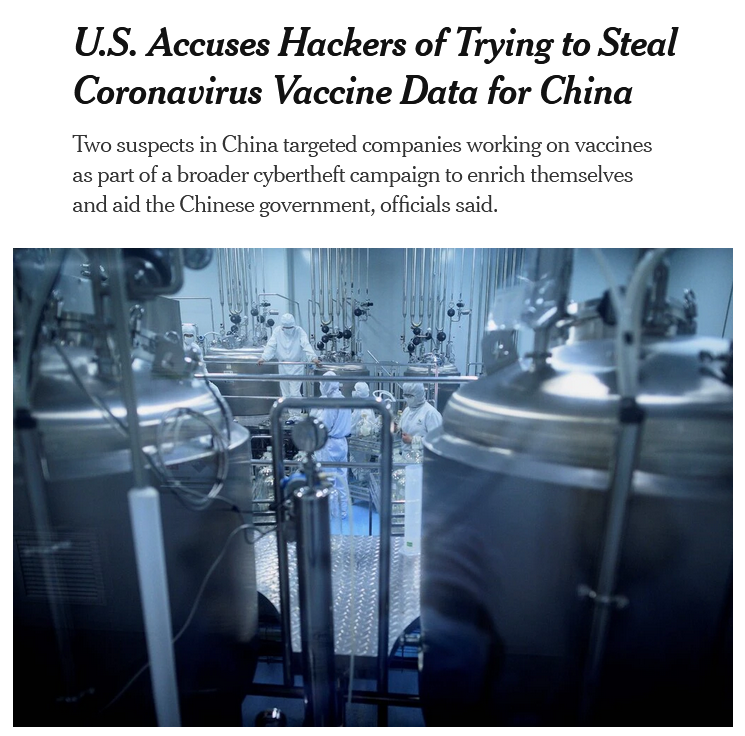 The New York Times (7/21/20) writes that “Trump administration officials…have stepped up warnings in recent weeks about Chinese intelligence services and their campaign to steal information and influence American politics.”

Days later, the New York Times (7/21/20) produced another dubious report, “US Accuses Hackers of Trying to Steal Coronavirus Vaccine Data for China,” which focused on a Justice Department indictment against suspects Li Xiaoyu and Dong Jiazhi, for “targeting vaccine development” on behalf of Chinese intelligence. The Times story, also by Barnes, described the pair as a “blended threat who sometimes worked on behalf of China’s spy services and sometimes to enrich themselves.” Neither the Times, nor the US government officials it cites as sources, establish a direct link between the suspects and Chinese intelligence agencies. Instead, the only indirect evidence provided is the kind of hacking the duo allegedly performed:

According to the Times, Americans should care about this story because China’s alleged “covert activity could potentially set back vaccine research efforts.” The Times openly admitted that the pair are “unlikely to be brought to trial,” where evidence is supposed to be presented in order to convict them of the accusations levied against them by the Justice Department, and that no evidence has been presented on whether these hackers actually “stole” any information, or whether they actually did set back US vaccine research efforts with their alleged activity:

The indictment, which was filed in the Eastern District of Washington, did not say that the hackers successfully stole information or research on the vaccine…. Mr. Demers said an attempted breach could slow down research because it must be secured, but researchers also must make sure their data has not been corrupted or altered by the intruders. The government officials did not say they had evidence that such manipulation had occurred, however.

“This indictment reveals yet again that Chairman Xi leads an army of hackers that steal and attempt to steal—every single day, in almost every country and industry,” Mr. Sasse said, referring to President Xi Jinping of China.

But focusing too much on whether or not Russian and Chinese hackers actually did try to hack US coronavirus vaccine research would be missing the point. Corporate media reports accuse China of stealing “American” intellectual property, even though the vast majority of Americans don’t own any, and would likely benefit from China not respecting the intellectual property of corporations like Microsoft and Pfizer (FAIR.org, 5/23/18, 8/27/19). Why anyone should care more about the potential inability of US corporations to profit off a coronavirus vaccine—as opposed to getting an effective vaccine as soon as possible, no matter where the source is—is never explained in these reports.

As epidemiologists, US academics and FAIR (4/2/20; CounterSpin, 5/9/20) have pointed out before, the optimal way to develop a coronavirus vaccine on the pace and scale required to combat the pandemic is through international cooperation and open research, which would both minimize risk and maximize efficiency. Current Affairs’s Nathan J. Robinson (7/17/20) noted that corporate media hysteria over alleged enemy hacking is one of “the most egregious examples” of “nationalistic bias leading to moral imbecility”:

What’s incredible is that nowhere in the stories is anybody quoted questioning the logic of viewing vaccine development as a “competition.” Nobody explains why researchers are keeping their research secret rather than sharing it as widely as possible. There is no discussion of how this constitutes a totally bizarre way to combat a global pandemic, which should not be a “race to see which country can find a vaccine first so that it can force everyone else to pay up if they want to save their people’s lives.”… Let’s have some moral honesty: The competitive approach is evil. It is criminal that any country is keeping vaccine information secret from other countries in the first place. That is mass murder.

One should expect corporate media outlets like the Times to equate corporate interests with the US national interest. By spinning the intellectual property of large US corporations as something that must be safeguarded rather than something that should be shared, US media are failing to inform their audiences about how corporations are delaying the development of a vaccine—and causing unnecessary deaths.