Infections in Indonesian city plummet after release of mosquitoes injected with Wolbachia bacteria. 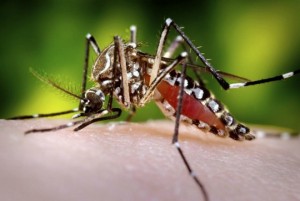 27 Aug 2020 – Infecting mosquitoes with a naturally occurring bacteria dramatically reduces their ability to transmit dengue, according to a breakthrough study that could pave the way to eliminating the disease.

Research conducted in Indonesia, where dengue is endemic, found that releasing mosquitoes infected with the bacteria Wolbachia into parts of Yogyakarta city reduced the number of dengue infections by 77% compared with untreated areas.

“We are really hopeful this will lead to local elimination [of dengue] in Yogyakarta city, and the next stage is to scale up beyond Yogyakarta to other parts of Indonesia,” said Dr Katie Anders, director of impact assessment at the World Mosquito Program, and one of the study’s lead researchers.

The same method is also being applied in other countries where dengue is prevalent, with the aim of eliminating the disease as a public health concern.

During the study, buckets of mosquito eggs infected with Wolbachia were gradually distributed to homes in the city over a period of around six months. In total, about 6 million mosquitoes were released across an area of 13 square kilometres, where they then infected other wild mosquitoes.

Other parts of the city did not receive any infected mosquitoes, with health teams instead continuing the usual disease control methods.

The infected mosquitoes did not behave differently, nor did their population fall, but their capacity to transmit the virus that causes dengue was vastly reduced.

It’s not known why Wolbachia – which researchers micro-injected into mosquito eggs – inhibits the transmission of dengue, said Anders. It might be that the bacteria and virus are competing inside the mosquito for resources needed to replicate. “By having bacteria there it might prevent the virus from growing, and or [the bacteria] might elicit an immune response in the mosquito that’s protective against the virus.”

The study supports previous findings from non-randomised studies in Yogyakarta and northern Queensland. It is an important milestone, said Anders, because it provides “definitive evidence from a gold standard trial that where we have Wolbachia established, we are seeing dramatically less dengue”.

The findings provide fresh hope in the battle against dengue, which has grown in prevalence over recent decades, spreading to previously unaffected countries, and causing larger outbreaks in areas where it is already endemic. The World Health Organization recorded 4.2 million cases in 2019. There is no specific treatment for dengue.

While the rise in case numbers is partly due to better reporting practices, some have warned global heating is fuelling its spread.

“It is also to do with urbanisation and high-density population because this mosquito [Aedes aegypti, the main vector for dengue] likes to live in urban environments close to people,” said Anders.

The movement of people between countries has also allowed the introduction of each of the four dengue virus strains into new areas, she added.

Indonesia has 7 million dengue cases a year, said Professor Adi Utarini from Universitas Gadjah Mada, which partnered with the World Mosquito Program. The study, she said, showed “the significant impact the Wolbachia method can have in reducing dengue in urban populations”.

The same method was previously applied in parts of northern Queensland, where dengue has now been eliminated as a public health concern, with no outbreaks recorded for the past five years.

Nicholas Jewell, professor of biostatistics and epidemiology at the London School of Hygiene and Tropical Medicine, and the trial’s independent statistician, described the results as compelling. “Doubly exciting is that the trial design used here provides a template that other candidate health interventions can follow,” he said.

It is believed the presence of the Wolbachia bacteria also prevents the spread of other viruses such as chikungunya and zika – though such diseases were not prevalent enough in Yogyakarta for researchers to test this in the study.

Detailed results of the trial, which was completed across an area with a population of 312,000, will be presented at an international scientific congress in November.