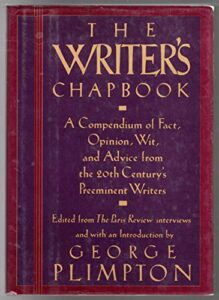 “Talent is insignificant. I know a lot of talented ruins. Beyond talent lie all the usual words: discipline, love, luck, but most of all, endurance.”

In 1989, Paris Review founding editor and trailblazing interviewer George Plimpton edited a wonderful collection titled The Writer’s Chapbook: A Compendium of Fact, Opinion, Wit, and Advice from the 20th Century’s Preeminent Writers (public library). Among them was novelist, poet, essayist, and playwright James Baldwin (August 2, 1924–December 1, 1987), whom Plimpton had interviewed on two separate occasions in early 1984, half a century after Baldwin read his way out of Harlem and into the pantheon of literary greatness.

In a fantastic addition to the collected wisdom of celebrated writers, Baldwin looks back on his formidable career and shares what he has learned about the creative process, the psychological drivers of writing, and the habits of mind one must cultivate in order to excel at the craft.

Reflecting on what motivates great writers to write — an enduring question also addressed beautifully by George Orwell, David Foster Wallace, Italo Calvino, and William Faulkner — Baldwin sides with Bukowski and argues that the supreme animating force of the writer is the irrepressible impossibility of not-writing:

Something that irritates you and won’t let you go. That’s the anguish of it. Do this book, or die. You have to go through that. Talent is insignificant. I know a lot of talented ruins. Beyond talent lie all the usual words: discipline, love, luck, but most of all, endurance.

Endurance, indeed, is perhaps the sole common denominator among successful authors. Any aspiring writer, he admonishes, should have no illusion about the endurance required but should want to write anyway. A generation after Jack Kerouac considered the vital difference between talent and genius, Baldwin notes:

In a sentiment reminiscent of Joan Didion’s observation that she writes in order to gain better access to her own mind, Baldwin speaks to the consciousness-clarifying function of the creative impulse:

Much of that self-revelation, Baldwin points out, happens not during the first outpour of writing but during the grueling process of rewriting. Echoing Hemingway’s abiding wisdom on the crucial art of revision, he adds:

Rewriting [is] very painful. You know it’s finished when you can’t do anything more to it, though it’s never exactly the way you want it… The hardest thing in the world is simplicity. And the most fearful thing, too. You have to strip yourself of all your disguises, some of which you didn’t know you had. You want to write a sentence as clean as a bone. That is the goal.

But as essential as that sense of incompleteness may be in guiding the revision process, it must be mediated by the awareness that completeness is a perennial mirage. (Decades later, Zadie Smith would observe in her ten rules of writing: “Resign yourself to the lifelong sadness that comes from never ­being satisfied.”) Baldwin offers:

When you’ve finished a novel, it means, “The train stops here, you have to get off here.” You never get the book you wanted, you settle for the book you get. I’ve always felt that when a book ended there was something I didn’t see, and usually when I remark the discovery it’s too late to do anything about it.

Adding to the endlessly fascinating daily rhythms of great writers, which reflect the wide range of differences in the cognitive conditions of the ideal writing routine, Baldwin shares his work habits:

I start working when everyone has gone to bed. I’ve had to do that ever since I was young — I had to wait until the kids were asleep. And then I was working at various jobs during the day. I’ve always had to write at night. But now that I’m established I do it because I’m alone at night.

Complement The Writer’s Chapbook — a treasure so wisdom-packed that it is a tragedy to see it fall out of print — with Joseph Conrad on what makes a great writer, Willa Cather on the life-changing advice that made her a writer, and Jane Kenyon on what remains the finest ethos to write and live by, then revisit Baldwin on the artist’s role in society and his terrifically timely conversation with Margaret Mead about race and identity.