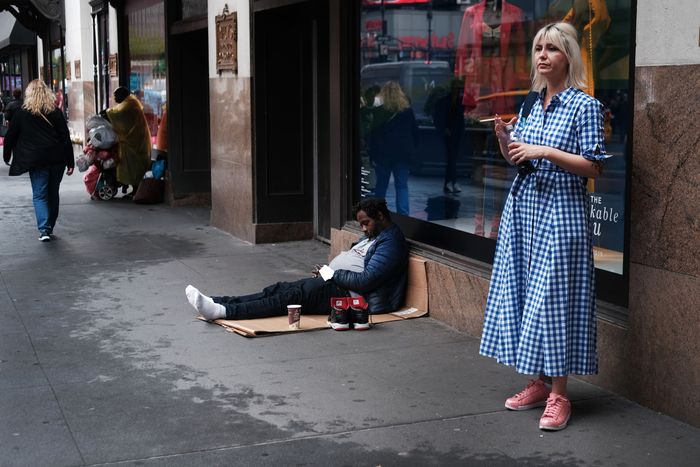 A better world would be possible. Photo: Spencer Platt/Getty Images

14 Sep 2020 – Every few months, some group of socially conscious number crunchers will remind Americans that a tiny elite is binge-eating the nation’s economic pie while the rest of us plebeians fight over table scraps. Journalists will then aggregate eye-popping statistics and edifying charts, progressives will share these over social media, adorned with red-faced (and/or guillotine) emoji — and the moral arc of history will carry on bending toward neofeudalism.

So, in the present moment of booming stock markets and child hunger, you might be feeling too inured to America’s grotesque levels of inequality to summon much interest in yet another report testifying to the one percent’s total victory in the 50 Years Class War.

But a new study from the Rand Corporation, in partnership with the Fair Work Center, illustrates the impact of a half-century of upward redistribution in bracingly concrete terms: If income had been distributed as evenly over the past five decades as it was in 1975, the median full-time worker in the U.S. would enjoy annual earnings of roughly $92,000 a year. As is, that worker makes just $50,000.

It’s no secret that wage and productivity growth began decoupling in the 1970s. Charts like this one from the Economic Policy Institute have been ubiquitous in progressive economic policy debates since the Great Recession:

But RAND’s innovative methodology — which involved constructing a new metric for inequality that compares income growth to GDP, and then using that metric to gauge changes in the income distribution across every U.S. business cycle since 1975 — allowed it to translate the abstractions of macro-level income shares into something much more tangible. Between the mid-1970s and 2018, per capita GDP growth in the U.S. increased by 118 percent. Had income growth on every rung of America’s class ladder kept pace with those gains, annual earnings at the bottom would be nearly twice as high as they are now. Meanwhile, the bottom 90 percent of U.S. earners would collectively take home $2.5 trillion more in income each year.

There are a few significant limitations to RAND’s data. Chief among these is that the study only measures taxable income, which does not capture any potential increase in non-monetary forms of compensation, such as health-care benefits. There is no question that such perks make up a larger share of labor’s compensation today than they did in 1975. That may say more about runaway rent-seeking in America’s health-care system than it does about worker’s true income gains. But a perfect apples-to-apples comparison would take note of the value of benefits.

Separately, it seems likely that had America’s income distribution held constant since 1975, inflation would have been much higher in recent decades — and thus, “2018 dollars” in the counterfactual universe would be worth less than they are in our own. The reason for this is simple: Rich people have a lower propensity to consume each additional dollar of income than working people do. Thus, if you concentrate income gains among the rich, the bulk of those dollars will be invested; which is to say, they will be used to bid up the prices of stocks and real-estate. If you concentrate income gains among workers, meanwhile, the bulk of those gains will be spent on goods and services, thereby bidding up consumer prices.

This is a crucial part of the inequality story in the United States. Under Paul Volcker’s leadership, the Federal Reserve consciously sought to overcome the high inflation of the late 1970s by breaking the bargaining power of U.S. workers, and reducing labor’s share of income. Thanks to the Reagan revolution, among other things, the central bank accomplished this objective too well. Now, instead of contending with inflationary pressures, the Fed must make increasingly audacious interventions in capital markets to ward off the perennial threat of consumer price deflation — even as asset prices rise to evermore spectacular highs.

Nevertheless, RAND’s projections remain a useful approximation. Although the income distribution it posits would probably be one more vulnerable to inflation, it would also probably be more conducive to economic growth. In 2014, OECD economists estimated that increases in income inequality had reduced U.S. GDP growth by as much as 8 percentage points over the preceding two decades.

Further, if we acknowledge that economic power is easily translated into the political variety, it seems likely that in RAND’s counterfactual universe, ordinary Americans would enjoy more generous social benefits and workplace protections than they do in our dimension. Thus, even if we stipulate that a more equitable income distribution would mean a weaker dollar in 2018, it’s possible that RAND’s counterfactual underestimates what the real value of the median workers’ annual income would have been under such a distribution.

Regardless, the paper makes the radical regressivism of the contemporary U.S. political economy plain to see. Progressives often mock nostalgic invocations of some bygone golden era in American life, noting that the postwar period was less than “great” for Black Americans in the Jim Crow South, or women trying to make a place for themselves in the professions. And this allergy to white male-centric nostalgia has much to recommend it. But it is also the case that the first three decades after the Second World War witnessed a degree of shared prosperity that was never seen before or since. And if the income distribution of 1975 had been maintained over the ensuing decades, according to RAND’s methodology, wages for most Black workers would be nearly twice as high as they are now.

Actually-existing America has a lot of problems, many of which cannot be reduced to questions of economics or class power. But it is hard not to suspect that most of our nation’s troubles would be less severe, if America’s working-class had an extra $2.5 trillion to spend each year.