The ‘Desaparecidos’ of Palestine: Gantz Escalates Israel’s War on the Dead 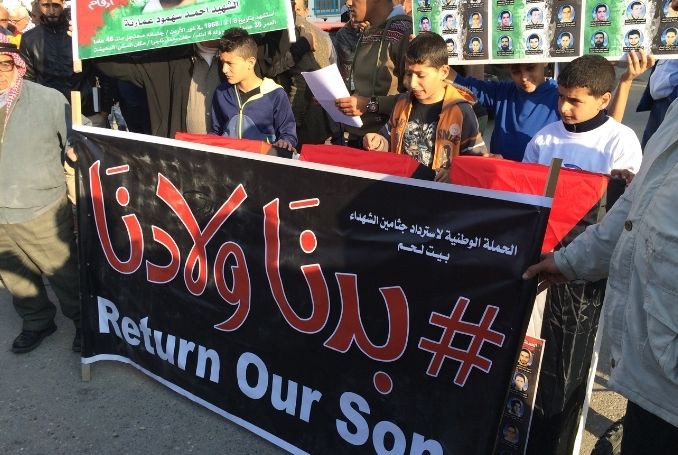 Palestinian children hold placards during a demonstration to demand the return of the bodies of relatives who were killed by Israeli forces. (Photo: File)

16 Sep 2020 – On September 2, the Israeli government approved a proposal that allows the military to indefinitely withhold the bodies of Palestinians who have been killed by the Israeli army. The proposal was made by the country’s Defense Minister, Benny Gantz.

Gantz is the main political rival of Prime Minister Benjamin Netanyahu. He also serves the role of the ‘alternate Prime Minister.’ If Netanyahu does not renege on the coalition government agreement he signed with Gantz’s Blue and White Party last April, Gantz will take the helm of Israel’s leadership, starting November 2021.

Since his official induction to the tumultuous world of Israeli politics, Gantz, supposedly a ‘centrist’, has adopted hawkish stances against Palestinians, especially those in Gaza. This way, he hopes to widen his appeal to Israeli voters, the majority of whom have migrated en-masse to the Right.

But Gantz’s latest ‘achievement’, that of denying dead Palestinians a proper burial, is not entirely a novel idea. In fact, in Israel, bargaining with corpses has been the modus operandi for decades.

According to the Defense Minister’s logic, the withholding of bodies will serve as a ‘deterrent against terror attacks.’ However, judging by the fact that the practice has been in use for many years, there is no proof that Palestinians were ever discouraged from resisting Israel’s military occupation due to such strategies.

The new policy, according to Israeli officials, is different from the previous practices. While in the past, Israel has only kept the bodies of alleged ‘Palestinian attackers’ who belonged to ‘terror groups’, the latest decision by the Israeli government would extend the rule to apply to all Palestinians, even those who have no political affiliations.

Aside from Gantz’s attempt at shoring up his hawkish credentials, the military man-turned politician wants to improve his chances in the on and off, indirect negotiations between Israel and Palestinian groups in Gaza. Israel believes that there are four soldiers who are currently being held in Gaza, including the bodies of two soldiers who were killed during the devastating Israeli war on the besieged Strip in July 2014. Hamas has maintained that two of the four soldiers – Hadar Goldin and Shaul Aaron – are, in fact, still alive and in custody.

For years, low-level talks between Hamas and Israel have aimed at securing a deal that would see an unspecified number of Palestinian prisoners freed in exchange for the detained Israelis. By withholding yet more Palestinian bodies, Tel Aviv hopes to strengthen its position in future talks.

The reality, however, is quite different. The Israeli army has not been returning the bodies of Palestinians who are accused of attacking Israeli soldiers for months, which includes all Palestinians, regardless of their purported political affiliations.

Undoubtedly, withholding corpses as a political strategy is illegal under international law. Article 130 of the Fourth Geneva Convention clearly states that persons who are killed during armed conflicts should be “honorably buried … according to the rites of the religion to which they belonged.”

The Israeli Supreme Court, however, which quite often rules contrary to international law, resolved on September 9, 2019 – exactly one year before the Israeli cabinet’s decision – that the army has the right to continue with the practice of withholding the bodies of dead Palestinians.

While Israel is not the first country to use the dead as a bargaining chip, the practice in Israel has lasted as long as the conflict itself, and has been utilized in myriad ways with the intention of humiliating, collectively punishing and bargaining with Palestinians.

During Argentina’s ‘Dirty War’ (1976-1983), tens of thousands of Argentinians ‘disappeared’. Students, intellectuals, trade unionists and thousands of other dissidents were killed by the country’s regime in an unprecedented genocide. The bodies of most of these victims were never recovered. However, the practice largely ceased following the collapse of the military junta in 1983.

Similar ordeals have been inflicted by other countries in many parts of the world. In Israel however, the practice is not linked to a specific military regime or a particular leader. The ‘desaparecidos’ of Palestine span several generations

To this day, Israel maintains what is known as the ‘cemeteries of numbers’. Salwa Hammad, a coordinator for the Palestinian National Campaign to Retrieve Martyrs, estimates that there are six such cemeteries in Israel, although Israeli authorities refuse to divulge more details regarding the nature of these cemeteries, or exactly how many Palestinian bodies are buried there.

The Jerusalem Legal Aid and Human Rights Center estimates that 255 Palestinian bodies are buried in these cemeteries, 52 of them being ‘detained’ there by Israeli authorities since 2016.

In the ‘cemeteries of numbers’, Palestinians are known, not by name, but by a number, one that only Israel can cross-reference to the actual individual who is buried there. In 2011, the body of Hafez Abu Zant was released after being held in one of these cemeteries for 35 years, Bernama news agency reported.

According to Hammad, “If the remains are in a ‘cemetery of numbers’, we get it back in a black bag – some bones, some soil and maybe their clothes.”

Following the Israeli cabinet’s approval of his proposal, Gantz bragged about his ability to apply “an extensive policy of deterrence since entering office”. The truth is that Gantz is merely posturing and taking credit for a protracted Israeli policy that has been applied by all previous governments, regardless of their political orientations.

If Gantz is truly convinced that holding dead Palestinian bodies – while maintaining the Israeli military occupation – will bring about whatever skewed definition of peace and security he has in mind, he is sadly mistaken.

Such policies have proven a complete failure. While Palestinian families are absolutely devastated by this hideous practice, the detention of corpses has never quelled a rebellion, neither in Argentina nor in Palestine.