9 Sep 2020 – A staggering new report coauthored by Professor David Vine at the Watson Institute at Brown University conservatively estimates that 37 million people, equivalent to the entire population of Canada, have been forced to flee their home country, or have become internally displaced within it by nearly two decades of unending US imperialist war.

The analysis, published by the Costs of War Project, sought to quantify for the first time the number of people displaced by the United States military operations since President George W. Bush declared a “global war on terror” in September 2001 following the still unexplained attacks on the World Trade Center in New York City and the Pentagon.

Professor Vine and his coauthors note that the 37 million estimated displaced is a “very conservative estimate,” with the real number of people displaced since September 2001, “closer to 48-59 million.” That is as much as, or more than, all of the displaced persons in World War II and therefore more than any other war in the last century. It is difficult to articulate the levels of misery, poverty, hardship, strife, pain and death visited upon entire societies and endured by millions of people.

The latest Costs of War report focused on eight countries that have been subjected to major US military operations: Afghanistan, Pakistan, Yemen, Somalia, the Philippines, Iraq, Libya and Syria.

The two countries with the highest number of displaced persons were Iraq and Syria, whose populations have suffered for decades under US-led regime-change operations and military occupations initiated by both Republican and Democratic administrations. The authors estimate that 9.2 million people in Iraq and 7.1 million in Syria have been displaced respectively, in both cases roughly 37 percent of the prewar population. 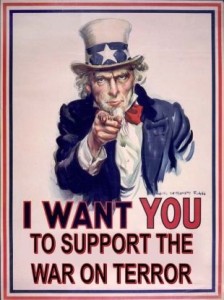 The authors were careful to note that they only counted Syrian refugees and displaced persons post-2014, even though US-funded and supplied terrorist groups such as the Al Qaeda-affiliated Al Nusra Front, the Islamic State and other Islamist groupings began operations against the Syrian government as early as 2011. If the figures were to include the previous three years, the estimates exceed 11 million.

Somalia, where US forces have been operating since 2002, has the highest percentage of displaced persons with 46 percent of the country or nearly 4.2 million people displaced.

Throughout the “war on terror,” the authors estimate between 770,000 and 801,000 civilians and combatants on all sides have died in Afghanistan, Iraq, Syria, Pakistan and Yemen since US forces began military operations in those countries. The number of “indirect deaths,” that is, those who weren’t confirmed killed by military weaponry, but died due to lack of healthcare, infrastructure, or food as a result of US military operations, embargoes and blockades may exceed 3.1 million, although the authors noted that credible estimates range in excess of 12 million.

While orders of a magnitude lower, an estimated 6,100 US military personnel and contractors have also died since the 2001 invasion of Afghanistan. If one were to include US deaths from Iraq, Syria, Pakistan, Yemen and the dozens of African countries the US military has been waging secretive covert wars for years, the death toll rises to roughly 15,000.

Mentally and physically broken from the trauma of war, hundreds of thousands of US veterans have returned with horrific physical and mental wounds, from amputations and burns to post-traumatic stress disorder and traumatic brain injuries. As of 2018, 1.7 million veterans have reported a disability connected to their deployment.

The horrific numbers are a damning indictment of the capitalist system, the source of imperialist war and conflict. Since the fall of the USSR in 1990-1991, the US ruling class has embarked on an endless effort to reverse through military means the protracted erosion of its dominant global economic position and stave off any challenges to American hegemony in Eurasia, Africa and the Pacific.

Despite President Donald Trump’s recent statements in which he attempted to posture as an opponent of the “top people in the Pentagon” who just “fight wars so that all of those wonderful companies that make the bombs…stay happy,” the report illustrates that far from ending the illegal US wars or cutting back on military spending, the Trump administration has continued the aggressive regime-change operations, began under the Obama-Biden administration, in Libya and Syria, and accelerated bombing campaigns in Afghanistan and Somalia.

In addition to unending wars in central Asia, Trump has broadened the scope of the “war on terror” to include large swaths of Africa with over 6,000 troops spread out over 22 countries. In all, some 80 countries are now occupied by over 800 US bases, airfields, black sites and private military watch posts, costing over $50 billion a year to maintain.

Trump has also continued the US military occupation of the Philippines, specifically the southern islands of Mindanao, where up to 6,000 US special forces and “military advisers” have engaged in a four-decade-long campaign to root out “terrorists” and “counterinsurgents.” In 2017, US forces fought alongside the Philippine military, providing weapons, training and aerial reconnaissance, leading to the destruction of the historic city of Marawi, displacing nearly 200,000 people.

Since assuming the presidency, Trump has repeatedly boasted that he has “replenished” the US’s “depleted” military under his watch. With the help of the Democrats in Congress, Trump has increased the US military budget each year in office, including signing a monstrous $738 billion budget for fiscal year 2020, a 5.3 percent increase over the previous year. The Stockholm International Peace Research Institute estimates that arm sales revenues for the top five US war profiteers, Lockheed Martin, Boeing, Raytheon, Northrop Grumman, and General Dynamics, increased by 30 percent between 2015 and 2019.

While the Trump administration has refused to publish a monthly Airpower Summary since February 2020, US Central Command declared earlier this year that US warplanes dropped 7,423 bombs on Afghanistan in 2019, more than any other year since 2006. Since Trump came into office, Afghanistan, with an estimated 5.3 million displaced since 2001, has seen over 20,000 US bombs dropped on the country, including the criminal deployment of the Massive Ordnance Air Blast (video), the most destructive bomb used in combat since the atomic bombings of Hiroshima and Nagasaki.

To paraphrase Leon Trotsky, capitalism has turned entire regions of the globe into a foul prison, with millions of refugees forced to live in squalid refugee camps, rife with disease and exploitation. The vast majority of those fleeing evictions, death threats, and ethnic cleansing, perpetuated by US-fueled sectarian violence in countries such as Iraq, Syria and Somalia, are not soldiers or “radical terrorists,” but young jobless men, single mothers, and unaccompanied children.

Global travel restrictions due to the COVID-19 pandemic have forced those fleeing US-instigated conflict to seek refuge within their own country, resulting in millions of internally displaced persons. Based on their conservative estimate of the 37 million total displaced, the authors estimate eight million people have been forced to flee across international borders as refugees and asylum seekers, equivalent to the entire population of Virginia, while 29 million, more than the entire state of Texas, have been internally displaced.

Thousands have died attempting to flee war zones as the imperialist powers in Europe and America wage proxy wars throughout Africa and Asia in order to secure markets and resources for exploitation. The European Union has adopted a policy of mass murder, refusing to accept refugees fleeing from Libya and Syria across the Mediterranean Sea, leading to over 20,000 drowning deaths between 2014-2020, according to statista.com.

A Democratic administration led by former Vice President Joe Biden would not reverse these horrific trends. As former Obama administration officials repeated throughout the Democratic convention last month—which featured a bevy of neoconservative war criminals responsible for the destruction of Iraq and nearly two-decades-long occupation of Afghanistan—a Biden administration, no less than Trump, would increase US military aggression, leading to millions more dead and displaced.

While the human cost of the so-called “war on terror” is incalculable, the material cost to the US population is astronomical, with Brown University estimating the cost of the wars exceeding over $6.4 trillion as of November 2019. To put that in perspective, the US government spent roughly $260 billion to provide 13 weeks of enhanced unemployment benefits to roughly 30 million people, allowing millions of people to feed and clothe their families, while staying home in order to prevent the spread of COVID-19. $6.4 trillion would equate to roughly 320 weeks of $600 weekly payments, or over 6 years’ worth.

The US government’s switch in 2018 from the “war on terror” to “great power conflict” portends an even more massive and deadly conflagration that will lead to the displacement and deaths of hundreds of millions of people. The ever-deepening crisis of capitalism and the global order, exacerbated by the coronavirus pandemic, a trigger event in world history, poses starkly and urgently the question of building a massive anti-war, anti-capitalist and socialist leadership in the working class, capable of leading an international movement to put an end to imperialist war.