Vaccine-Derived Polio Spreads in Africa after Defeat of Wild Virus 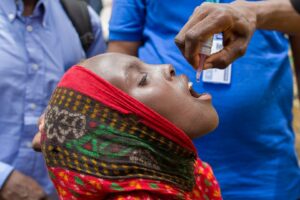 2 Sep 2020 – A new polio outbreak in Sudan has been linked to the oral polio vaccine that uses a weakened form of the virus.

News of the outbreak comes a week after the World Health Organization (WHO) announced that wild polio had been eradicated in Africa.

The WHO linked the cases to a strain of the virus that had been noted circulating in Chad last year and warned that the risk of spread to other parts of the Horn of Africa was high.

In a statement on the new cases, the WHO said two children in Sudan, one from South Darfur state and the other from Gadarif state, close to the border with Ethiopia and Eritrea, were paralysed in March and April. Both had been recently vaccinated against polio.

The WHO said initial outbreak investigations showed the cases were linked to a continuing vaccine-derived outbreak in Chad that was first detected last year and is now spreading in Chad and Cameroon.

While so-called vaccine-derived polio is a known risk, the emergence of these cases so soon after the announced eradication of wild polio in Africa is a setback.

At issue is the fact that the oral polio vaccine – preferred in some places because of its ease of delivery and the lack of need for sterile syringes – uses an attenuated or weakened version of polio.

When a child receives the oral vaccine, the weakened virus replicates in the intestine, encouraging the production of antibodies, and can be present in excreta. In an area where there are high enough levels of immunity in the population, this usually does not present a problem, even if sanitation is poor.

But in areas where there is both poor sanitation and a lack of general immunisation the virus can survive and circulate for months, mutating over time until it poses the same risk of paralysis-causing disease as wild polio.

Genetic sequencing of the virus involved in the Sudan cases confirmed that they were linked to the outbreak in Chad.

The WHO warned on Monday that the risk of further spread of vaccine-derived polio across central Africa and the Horn of Africa was high, noting the large-scale population movements in the region.

Amid the coronavirus pandemic, many major vaccination campaigns needed to stamp out polio have been disrupted across Africa and elsewhere, leaving millions of children vulnerable to infection.

In April, the WHO and its partners reluctantly recommended a temporary halt to mass polio immunisation campaigns, recognising the move could lead to a resurgence of the disease.

In May, they reported that 46 campaigns to vaccinate children against polio had been suspended in 38 countries, mostly in Africa, because of the coronavirus pandemic.

Some of the campaigns have recently been restarted, but health workers need to vaccinate more than 90% of children in their efforts to eradicate the paralytic disease.

Health officials had initially aimed to wipe out polio by 2000, a deadline repeatedly pushed back and missed.

Wild polio remains endemic in Afghanistan and Pakistan; both countries are also struggling to contain outbreaks of vaccine-derived polio.

Peter Beaumont is a senior reporter on the Guardian‘s Global Development desk. He has reported extensively from conflict zones including Africa, the Balkans and the Middle East and is the author of The Secret Life of War: Journeys Through Modern Conflict.