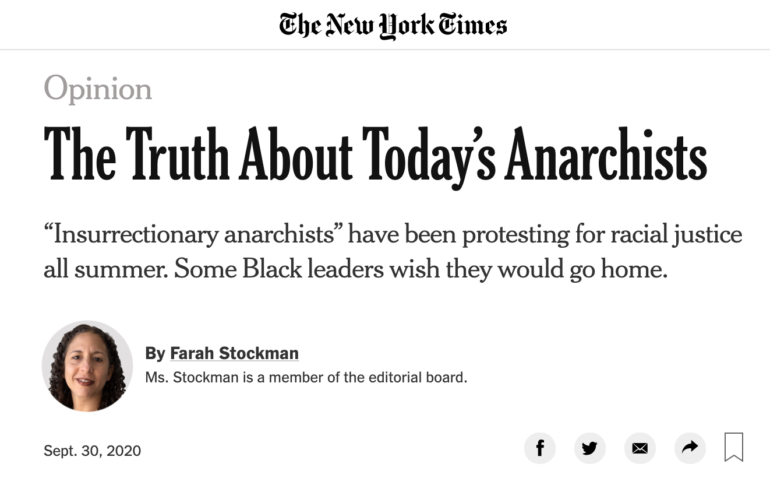 22 Oct 2020 – At the end of September, after a brief exchange on Twitter about her article “The Truth About Today’s Anarchists” we received an email from Farah Stockman, a member of the New York Times Editorial Board, who asked that we connect her to sources within the anarchist movement for an upcoming of story. We replied with the following request, to air our concerns with her editorial of 9/30/20.

We did not hear back. We share the exchange below to add to the public record on this atrocious reporting and to make our concerns about her and The New York Times’ fear mongering and smearing of the anarchist movement known.

For more background on this, see The Ex-Worker’s statement.

In another post we will share a Letter to the Editor that The New York Times have refused to publish or acknowledge receipt of.

I’m interested in hearing from folks who are willing to talk about debates about tactics among protesters as well as debates about how to relate to people working within the system to achieve goals that anarchists share.

Thanks for reaching out.

Thanks for reaching out to us.

We welcome dialog and exist to be a resource to journalists such as yourself. In that sense, we are happy to be connected. We were in touch in early 2017 when you were writing about anarchist and anti-fascists disruptions and protests of neo-fascist speeches and gatherings in Berkeley and elsewhere. Often when reporters get anarchism wrong, it’s clear they have an agenda that is served by misreporting; or they simply didn’t have access to anything besides misinformation and bad sources. Sometimes it’s both. In this case, you’ve worked with us before, so it’s particularly confounding why you didn’t do due diligence here.

The time to ask us for assistance with locating anarchist sources or for commentary was before you published “The Truth About Today’s Anarchists.” If we work with you now, how can we be certain you will write a fair and balanced story? At the very least you could tell us more about your intentions for your new article. Will you attempt to correct the record?

We are open to connecting you with sources and contacts to interview if you can make a good faith effort to correct the record in relation to your article. We know The New York Times has the ability to publish respectable editorials about anarchists that attempt to do more than slander and misrepresent anarchist actions and intentions, as was done with Mark Bray’s, What is Antifa?.

In addition to being reductive, your story does not appear to be informed by first-hand reporting. Your primary source is easily discredited, as our colleagues at the Ex-Worker point out here. Further, and perhaps most importantly, it’s irresponsible to title an opinion piece to claim it presents “The Truth” about anything. The New York Times should know better than to employ this disingenuous click-bait approach to journalism. As “the paper of record” it should be obvious just how problematic this claim is in relation to a subject that is so fraught, and so polarizing.

If the story was packaged differently, under a different headline, the piece would be less harmful. Bad reporting right now, on these types of issues specifically carries tremendous risks. In the current social and political climate, people who identify as anarchists have been murdered in the streets by right-wing thugs. So-called militias and militant neo-fascist gangs like the Proud Boys are growing in number and prominence in cities around the country. As evidenced by Tuesday’s presidential debate, these groups are fueled by hateful rhetoric, fear-mongering, and other misinformation about the radical left, Antifa, and anarchists, in particular, coming from the President and the Department of Justice. Your story is adding fuel to this fire.

By echoing the animus of the president and Justice Department, however inadvertently, your coverage not only fails to educate the public on important social dilemmas and topics, it serves to sow greater political division with very real consequences. The Trump administration needs no help in its campaign to discredit and incite violence against anarchists and activists on the left.

Heather Heyer’s killing in Charlottesville in 2017 was the first but not the last. Journalists like yourself, and media outlets like The New York Times do not need to agree with anarchist ideology, but at the very least, in striving toward basic decency, means reporting on these ideas and their proponents in a way that does not poison public discourse with misinformation that perpetuates harm and serves the worst actors.

The real truth about anarchists is that we hold many different perspectives, come from many walks of life, and embrace a multitude of strategies and tactics for advancing social change. From the fight for the 8-hour workday to the methods of organizing and social critiques that undergirded Occupy Wall Street to countless mutual aid responses to an increasing number of natural and human-caused disasters, Anarchists have helped shape our society for the better, throughout history. Anarchists cannot be defined as simply “insurrectionary”; we work in many different movements, industries, sectors, and communities, including at The New York Times (at least one reporter that we know of!). Ultimately, anarchists believe that a truly equitable world will be possible when we free ourselves from social hierarchies and the institutions that impose and depend on them such as capitalism and the state. Yet, anarchists are allies of all who seek a world free of racism, sexism, oppression, discrimination, fear, and exploitation.

We write here, to respectfully request that you change your headline and post recognition of where your reporting fell short on this article.

We are open to working with you and have already started to assemble contact information for people who would be willing to speak with you per your request. We hope you will see this as a good-faith effort on our part, and we ask for the same from you.

Will you be accountable for the misinformation and irresponsible reporting in “The Truth About Today’s Anarchists”?