‘The Dispossessed’ Is Still One of Sci-Fi’s Smartest Books 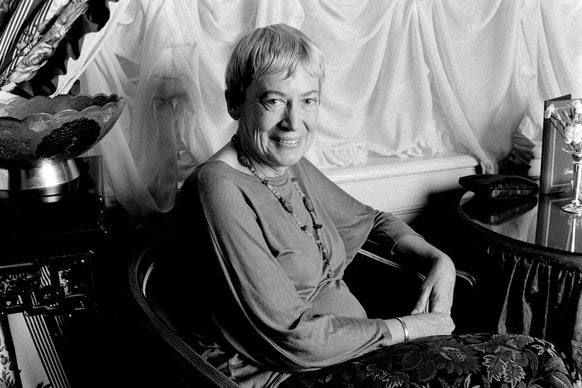 Ursula K. Le Guin’s 1974 novel, about a society with no government or laws, remains a thoughtful exploration of politics and economics decades later.
Photograph: Neil Turner/Alamy

2 Apr 2021 – Ursula K. Le Guin’s 1974 novel The Dispossessed depicts a society with no laws or government, an experiment in “nonviolent anarchism.” Science fiction author Matthew Kressel was impressed by the book’s thoughtful exploration of politics and economics.

“After reading The Dispossessed, I was just blown away,” Kressel says in Episode 460 of the Geek’s Guide to the Galaxy podcast. “It was just such an intellectual book. It’s so philosophical, and it was so different from a lot of the science fiction I had read before that. It made me want to read more of Le Guin’s work.”

Science fiction author Anthony Ha counts The Dispossessed as one of his all-time favorite books. “I would be hard pressed to think of another novel that made as strong an impression on me,” he says. “I was insufferable about it. I put quotes in my email signatures, and I identified as an anarchist for several years after that.”

Le Guin, who died in 2018, was one of science fiction’s most popular authors, and The Dispossessed was one of her most popular books, winning the Hugo, Nebula, and Locus awards. Geek’s Guide to the Galaxy host David Barr Kirtley notes that her themes of environmentalism, social justice, and feminism have had a profound influence on generations of readers.

“I remember when I interviewed Le Guin, one of the things I asked her about was that there had been a story in the news about how protesters—left-wing protesters—had these plastic shields on which they’d printed or painted the cover of The Dispossessed,” he says. “So it was really—in a very direct way—inspiring people.”

The book’s moral ambiguity and deliberate pace won’t appeal to everyone, but science fiction professor Lisa Yaszek says it’s exactly those qualities that make The Dispossessed so distinctive. “That’s my favorite thing about this book, is it really shows you that the process of getting to a utopia is boring,” she says. “It’s so much work, and it’s so much talk, and it’s so much thought. There’s nothing Flash Gordon about it, which I think is super-cool.” 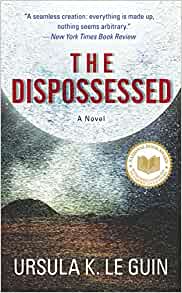 “I was in graduate school in the 1990s, and I was working at Wiscon, the oldest and largest feminist science fiction convention in the world, and I ended up having breakfast with Le Guin and Judith Merril—and by the way, best breakfast of my entire life. Nothing will ever be better than that day. That was a really interesting moment, and it made me want to go back and look at Le Guin’s work again. … My favorite thing about Ursula Le Guin is that she is science fiction’s best ambassador to the rest of the world, ever. She has done more to show people why this is an important genre—and maybe the mode of literature we need to navigate our way into a very uncertain future—than anyone else ever will.”

David Barr Kirtley on The Dispossessed:

“One of the things I really like in science fiction is this opportunity to see a society that has never existed but seems like it could exist, and to see our society through the eyes of some hypothetical society. And I thought that this book did that amazingly well, as well as any example I could think of. … One of the things I really liked was that [Shevek] is surprised at how hard everybody works in a capitalist society, because he always imagined that the main thing that motivates people is this volunteer instinct, and if you take that away—if people are just working for money—they would be lazy and wouldn’t be motivated. So it’s interesting how opposite a lot of the ways that he thinks are from what we’re familiar with.”

Anthony Ha on “To Read The Dispossessed“:

“It’s a 50- or 60-page essay where [Samuel R. Delany] goes into a lot of detail about some of the other shortcomings of the book, that I think are real and that we haven’t maybe gone into as much, but that it’s very much—despite being this ‘anarchist revolutionary book’—it’s very into the heterosexual married traditional family unit, and the one queer character is not portrayed very convincingly and is marginalized in a lot of ways. So there are a lot of things about it that are not entirely persuasive. But the way he ends the essay is by saying that when you read the book as somebody who’s young, you might be totally blown away by it, when you’re a little bit older and more sophisticated, you might come at it and be disappointed, but then when you’re more mature than that, you’ll see that the ambition of the thing is itself incredibly worthwhile.”

“You sometimes get certain literary circles that pooh-pooh science fiction. Even in the New Yorker article, there’s a quote: ‘If science fiction was down-market, it was at least a market.’ And then the other quote was: ‘Her editor, Charles McGrath, saw in her an ability to transform genre fiction into something higher.’ They’re writing this profile of one of the greatest science fiction authors of the 20th century, and they still can’t resist shitting on science fiction. … If you’re ignoring science fictional tropes, you’re ignoring reality. We have supercomputers in our pockets that connect to satellites. We have artificial intelligence that decides what we see every day. We have video conferences. NASA’s going to the moon again, and we have a probe on Mars—helicopters will fly on Mars in the next week or two. We’re living in a science fiction world, and if you ignore that, maybe you’re the one who’s the fantasist.”