The United States is home to 95 million cattle, and changing what they eat could have a significant effect on emissions of greenhouse gases like methane that are warming the world. 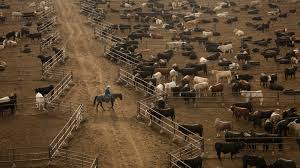 21 Oct 2020 – Randy Shields looked out at a sea of cattle at the sprawling Wrangler Feedyard — 46,000 animals milling about in the dry Panhandle air as a feed truck swept by on its way to their pens.

Mr. Shields, who manages the yard for Cactus Feeders, knows that at its most basic, the business simply takes something that people can’t eat, and converts it into something they can: beef. That’s possible because cattle have a multichambered stomach where microbes ferment grass and other tough fibrous vegetation, making it digestible.

But this process, called enteric fermentation, also produces methane, a potent planet-warming gas that the cattle mostly belch into the air. And with about 95 million cattle in the United States, including more than 25 million that are fattened for slaughter each year at feedlots, the methane adds up.

Researchers within and outside the industry are working on ways to reduce emissions from fermentation, through feed supplements or dietary changes. Other efforts aim to lower emissions from the animals’ waste — a source of methane as well as another powerful greenhouse gas, nitrous oxide — through improved manure storage and handling.

In the United States, cattle are far from the largest source of greenhouse gases, which include carbon dioxide, methane and others. Their total contribution is dwarfed by the burning of fossil fuels for electricity, transportation and industry. But livestock are among the largest sources of methane, which can have 80 times the heat-trapping power of carbon dioxide although it persists for less time.

Estimates vary, in part because animal emissions are more difficult to quantify than, say, flue gases at a power plant. But enteric fermentation by beef cattle accounts for nearly 2 percent of total emissions in the United States, according to the Environmental Protection Agency.

In effect, the animals are recycling carbon over a short time frame, so if the cattle population remains roughly the same, the contribution to warming remains about the same. “It’s leaving the atmosphere as fast as it’s coming,” said Alan Rotz, a researcher with the U.S. Department of Agriculture who has studied emissions from beef production.

The beef industry points out that, rather than remaining the same or increasing, the overall cattle population in the United States has declined by more than 25 percent since peaking in the 1970s, mostly because of efficiency improvements. But cattle populations are growing overseas, as nations become more affluent and beef consumption increases.

“For the U.S., we’re probably not adding methane to the atmosphere” from livestock, Dr. Rotz said. “But you add more methane as you add more animals, as we are doing globally.”

And even in the United States, with overall greenhouse gas emissions that are second only to China, making a dent in cattle emissions would have an effect.

Cargill Corporation, the food and agriculture giant that supplies feed to the beef industry, feedlots and others, is one of many companies doing research on substances that could be added to reduce methane emissions, said Heather Tansey, a director of sustainability at the company.

Cactus Feeders, which moves 1.1 million cattle a year through its 10 feedlots, designates about one-quarter of its pens at the Wrangler lot for studies on topics including the effects of dietary changes and ways to cut emissions from manure.

“There’s a need for work to be done in this area,” said Kenneth Casey, a scientist at the Texas A&M AgriLife Research and Extension Center in Amarillo, who was measuring the effects of rainfall on nitrous oxide emissions from manure in one of the Wrangler pens last month.

Jim Friemel, who with his wife, Melanie, owns and runs an independent feedlot in Hereford, Texas, that is half the size of Wrangler, doesn’t devote space to research. But he’s heard about melting ice sheets, rising sea levels and other accelerating effects of climate change, and would feed his 20,000 head of cattle a dietary supplement to reduce methane emissions if one were available at reasonable cost.

The emissions efforts are part of a broader push to make beef production more sustainable, including issues of water and land use. The work has taken on more urgency as the industry has come under pressure from environmentalists and others who say that to help conserve resources, the world must eat less meat.

In a report last year, for example, the EAT-Lancet Commission, an international group of scientists, recommended a 50 percent reduction in global consumption of red meat and some other foods by 2050.

In the United States, emissions have been affected by a major dietary change introduced decades ago. Feedlot cattle eat a diet in which corn or other high-energy grains account for up to about half the feed. This, plus reduced movement in the pens, helps the cattle fatten, producing the kind of well-marbled beef that consumers like. Studies have shown that a high-grain diet produces less methane.

But the microbes that break down corn are different from those that work on grass, so cattle have to be monitored carefully for bloat or other health problems. And farming of corn uses a lot of water, adding to concerns about resources.

Henry Fountain specializes in the science of climate change and its impacts. He has been writing about science for The Times for more than 20 years and has traveled to the Arctic and Antarctica.

Photographs and Video by George Steinmetz

A version of this article appears in print on Oct. 22, 2020, Section A, Page 20 of the New York edition with the headline: Manure, Belching Cows, And All Those Feedlots.