Entire Top of the Republican Party Has Been Exposed to COVID

President Trump’s campaign schedule has ensured that the top tier of the Republican Party either has contracted or has been exposed to COVID-19. 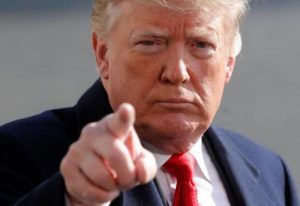 “Many loathe Trump not because of his personal behaviour but because of a far more profound embarrassment; he is America without the mask.” Photo: JIM YOUNG/REUTERS

3 Oct 2020 – The web of those exposed by President Donald Trump’s coronavirus diagnosis reads like a who’s who of his peripatetic campaign: his campaign manager, who has now tested positive, the chair of the Republican National Committee, the leader of the House GOP’s campaign arm, and several high-profile members of Congress.

Now, those officials—not to mention countless supporters of the president—have either contracted COVID-19 or are at high risk for it after a week in which an infected Trump has criss-crossed the country. It also means a wide swath of the GOP’s formal campaign apparatus could be sidelined a month before a pivotal election in which the party is losing ground in its efforts to hold onto the White House, keep the Senate, and recapture the House.

Last Friday, the president had a packed day on the campaign trail, with events in Miami, Atlanta, and Virginia, with a stop in between at his hotel in Washington for a “roundtable with supporters.” Somewhere along the way, Ronna McDaniel, the RNC chair, was with Trump. It was reported on Friday morning that she had contracted the coronavirus. An RNC spokesperson said that McDaniel had tested for COVID-19 after a member of her family had contracted the virus, and said she’d been at home in Michigan since Saturday.

Over the weekend, Trump traveled to Pennsylvania for a rally, and held a White House event with many notable GOP officials to honor Judge Amy Coney Barrett, his nominee to the U.S. Supreme Court. Sen. Mike Lee (R-UT) was in attendance; video taken of the event by a CNN reporter shows him hugging and greeting other attendees without wearing a mask. He announced Friday that he’d tested positive for COVID-19.

Then, on Tuesday, much of the Trump campaign team, along with a top ally, Rep. Jim Jordan (R-OH), traveled on Air Force One to Cleveland, where they shared a debate hall with Democratic nominee former Vice President Joe Biden and his staff, supporters, and family.

The day after, Trump traveled to Minnesota for a campaign rally, bringing along his top campaign aides as well as Rep. Tom Emmer (R-MN), chairman of the National Republican Congressional Committee, on Air Force One. The president held a private fundraiser beforehand that attracted GOP Reps. Jim Hagedorn and Pete Stauber of Minnesota, as well as Jason Lewis, the GOP nominee in the U.S. Senate race, and a number of key donors and GOP officials in the state. Later, an evening rally outside the Twin Cities featured a speech from Trump that was half his normal length; aides reportedly sensed he was tired.

On Wednesday, Lara Trump, the president’s daughter-in-law, posted photos to social media showing herself mingling with various Trumpworld figures at a campaign event at Trump’s hotel in Washington; she and others were not wearing masks. The day before, she had traveled to the debate in Cleveland on Air Force One with her family.

Many of those who work for Trump or accompanied him during his aggressive week of campaign travel announced on Friday their plans to get tested or that they’d already received a negative result.

But the unprecedented situation has complicated life for a much broader group of people—including Barrett, who Senate Republicans are aiming to confirm to the court within a historically tight timeframe. After she and her family attended the Rose Garden event on Saturday, Barrett met with dozens of U.S. senators on Capitol Hill for closed-door meetings—including with Lee. Photos of their meeting show Lee and Barrett posing with and without face masks.

On Friday, White House spokesperson Judd Deere said that Barrett had tested negative for COVID-19, but said she was following Centers for Disease Control and Prevention guidelines for social distancing and mask-wearing for those exposed. He did not mention if Barrett would be quarantining for 14 days from exposure to someone with the virus—a practice that is, in fact, CDC guidance. Barrett had been scheduled to meet with more lawmakers in the coming days; it’s unclear if those plans will continue, though Majority Leader Mitch McConnell (R-KY) said on Friday morning that he did not see the brewing COVID outbreak as an obstacle to the speedy confirmation process they’ve outlined for Barrett.

Beyond Barrett and the Senate, the House of Representatives has things to worry about, too. After traveling with Trump this week, several Republican lawmakers returned to Washington for multiple votes on the floor of the House. Emmer said on Friday morning that he was not exhibiting COVID-19 symptoms but had gotten a test that morning. Jordan, meanwhile, announced that he’d gotten a test but planned to work in isolation in his Capitol Hill office until he received a result. And Hagedorn’s office said he planned to continue his official duties—“such as voting on the House floor”—until he gets a negative COVID-19 result back.

“I think people are a bit rattled,” a House GOP aide told The Daily Beast on Friday morning, as lawmakers headed again to the floor for votes. “Things have been a little bit more back to normal the last two weeks, so I think this snaps everyone out of that complacency.”

Lachlan Markay is a reporter for The Daily Beast. Send him tips: lachlan.markay@thedailybeast.com, markay@protonmail.com or tips@thedailybeast.com. You can also use our anonymous document submission system, SecureDrop. Click here to find out how.