9 Oct 2020 – This year’s Nobel Peace Prize has been awarded to the World Food Programme. The UN institution beat famous and notorious competitors for the prestigious award, notably climate activist Greta Thunberg, US President Donald Trump and the World Health Organization. The award to the WFP has nonetheless generated criticism. 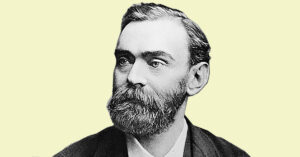 “We recognise the great value of the World Food Programme, but the 2020 prize is much less ambitious than Nobel’s idea of ‘conferring the greatest benefit on humankind’,” says a statement by Fredrik S. Heffermehl, a Norwegian lawyer and long-time critic of the process behind the awarding of the Nobel Peace Prize.

Heffermehl, author of the 2010 book The Nobel Peace Prize. What Nobel really wanted and who runs a website scrutinising the original will of Alfred J. Nobel, says that “the committee again deals with arbitrary, single aspects of the war problem, and never addresses the root causes that Nobel wished to remove.

“It may be a peace prize, but it is not the Nobel Peace Prize,” says Heffermehl, contacted by RFI via Zoom. “If you are going to implement a testament, to realise a will, you have to check what that will is.”

Heffermehl is an angry man, who says that “only 33 out of all the Nobel Prize winners” deserve it, over the 120 year period that the prize has been awarded. Two thirds of the winners, he says, do not.

On 21 September, Heffermehl, who earlier this year published the book Medaljens bakside (Behind the Medals,) wrote an angry letter to the Nobel Committee in Oslo, stating that “The Nobel testament was never professionally interpreted and never followed,”

While admitting that “The Nobel Committee has given general peace prizes to many fine recipients,” the will of Alfred Nobel is not being respected as Heffermehl thinks it was meant.

The original text of Alfred Nobel’s testament is published in full at the website of the Nobel Committee.

After giving substantial amounts of money to family members, the remaining fortune was to be divided annually in five equal parts as prizes for “those who, during the preceding year, have conferred the greatest benefit to humankind,” in the fields of physics, chemistry, medicine and literature.

The fifth part, says the testament is to be awarded to “the person who has done the most or best to advance fellowship among nations, the abolition or reduction of standing armies, and the establishment and promotion of peace congresses.”

But, says Heffermehl, that doesn’t happen as it was meant.

“Nobel’s main intention was to support contemporary ideas of a change of course away from military competition,” Heffermehl says. “The goal was to avoid war through cooperation on international law, international organisation and the abolition of national military armaments.”

Instead, he says, the Norwegian Nobel Committee (which grants the peace prize, the other prizes are awarded by the Swedish Academy) grew into a stiff “bureaucracy that merely occupies itself with picking a winner from all the submissions they receive”.

Of the 101 Nobel Peace Prizes that have been awarded since 1901, only the early nominees would have met the terms of Nobel’s testament, according to Heffermehl, “especially in the first decade,” with the most prominent example being the Austrian-Bohemian writer and peace activist Baroness Bertha von Suttner, who won the prize in 1905.

Von Suttner’s 1889 novel Die Waffen Nieder (Lay down your arms) was one of the main sources of inspiration for Nobel when he decided to use his money to support the struggle for world-wide disarmament, according to Heffermehl.

Not many of the awardees contributed to disarmament. The worst example, says Heffermehl, was the awarding, in 1973, to then US Secretary of State Henry Kissinger.

“People were horrified when he got the prize, it caused an uproar in the Norwegian Parliament. Kissinger betrayed Lyndon B. Johnson in the negotiations on peace in Vietnam, colluded with the presidential candidate, Richard Nixon,” thus postponing a peace deal and protracting the war for several years.

“I think this is high treason, and he should have been punished for this. And certainly, he is not the type of person who deserved a prize for global disarmament,” fumes Heffermehl.

Heffermehl’s candidate for the 2020 Nobel Peace Prize was peace activist David Swanson, winner of the 2018 US Peace Prize, and a fierce critic of US military involvement in world affairs.

What has been the answer of the Nobel Committee to Heffermehl’s insistent probing and letters?