‘The Social Dilemma’ Sounds Alarm on Social Media’s Dark Side 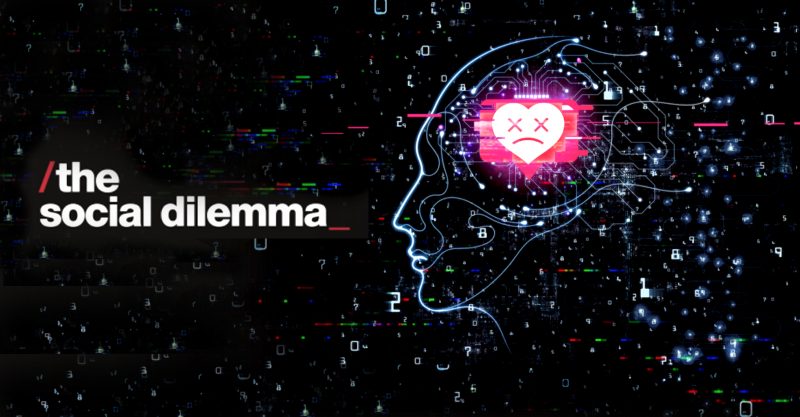 8 Oct 2020 – “The Social Dilemma,” a new documentary that explores the dark side of social media, has been a hot topic online since its Netflix release in August. Directed by Jeff Orlowski, the movie makes the case that widespread use of social media has led to a decline in mental health and an increase in political polarization.

“The Social Dilemma” gives a history of the social media industry through the eyes of former Facebook, Google and Twitter company executives and software engineers who all agree on this one point: The industry has lost its way.

Social media was designed to do good, the former insiders say. It was intended to provide everything from everyday conveniences, such as ordering a car on a smartphone, to life-changing solutions, such as finding an organ donor online. But those goals have been subverted, they say, to the point where the industry has created “monsters,” rather than tools for the common good.

“When I was there, I always felt like fundamentally, [social media] was a force for good. I don’t know if I feel that way anymore,” said one former industry executive. “Nobody, I deeply believe, ever intended any of these consequences,” said another.

Here are six insights former Silicon Valley insiders offer into how the social media industry has lost its way:

Success for a social media firm requires keeping people on its platforms for as long as possible, according to former industry employees. That’s how social media companies attract advertisers — and advertisers, not “users,” are social media’s most profitable customers.

What do social media companies “sell” to advertisers? Eyeballs and data, for sure. But according to celebrity computer scientist Jaron Lanier, social media’s most valuable “product” is behavioral change.

2. Social media firms want your data — and will do anything to get it

Because social media corporations sell the promise of behavior change, they need troves of data to create accurate behavior-prediction models. “Every single action you take is carefully monitored and recorded,” said Jeff Seibert, who formerly worked for Twitter.

To maximize data collection, social media companies need more people to visit their sites, and they need them to visit more often, and stay longer. Companies accomplish this by using psychological tricks of the trade designed to manipulate user behavior.

To illustrate how this works, “The Social Dilemma” shows a dramatic reenactment of a teen who tries not to use his phone for a week, but who ultimately gives into temptation after one notification about his ex-girlfriend. The movie submits that social media companies send such notifications often. “You’re exploiting a vulnerability in human psychology,” said Sean Parker, a former Facebook employee. “[We] understood this consciously, and we did it anyway.”

The movie shows that the “addiction- and manipulation-based” technologies deployed by social media companies can be devastating. Children who spend their free time on social media are more likely to be anxious or depressed, as evidenced by the upward trend in self-harm and suicide rates for young people.

According to social psychologist Jonathan Haidt, social media use is to blame for these disturbing trends. “These services are killing people and causing people to kill themselves,” said Tim Kendall, formerly with Facebook.

“The Social Dilemma” also describes the “Snapchat dysmorphia” phenomenon. That’s when kids say they want plastic surgery to alter their faces so they’ll look more like Snapchat filters. The film also points to the loss of real communication, as illustrated by a scene featuring two high school friends sitting side-by-side, engaging with their phones — but not with each other.

The documentary cites a recent poll showing the U.S. is more divided than ever, and that people who identify strongly with one political party often perceive the political views of members of opposing parties as a “threat to society.”

This polarization, according to the film, results from social media companies limiting the political content users see in their news feeds almost exclusively to content closely aligned with an individual’s own political preferences. Companies calculate that these posts are likely to keep an individual user online longer, and deploy them accordingly. As a consequence, intended or otherwise, users develop a false sense that everyone agrees with them.

The industry practice of tailoring political news to individuals’ personal views has another consequence: Because everyone sees different information, everyone operates from a different set of facts.

“When that happens at scale, you’re no longer able to reckon with, or even consume information that contradicts that worldview that you’ve created,” said Rashida Richardson, director of policy research at AI New Institute.

While “The Social Dilemma” addresses the negative impact on humans of social media’s manipulation of online political content, the film fails to address who, besides advertisers and social media companies themselves, benefits from this strategy. It’s worth noting that loss of critical thinking skills and the inability to “hear the other side” are direct benefits to corporations intent on containing social movements that are critical of bipartisan corporate influence over politicians and policy.

The film points to COVID-19-related content — for example, the claim that drinking water can flush the virus out of the human body — to illustrate the potential harm that can come from circulating misinformation on social media. “People have no idea what’s true, and now it’s a matter of life and death,” Harris said.

But who decides what constitutes fake news, misinformation and conspiracy theories? Terms like these automatically imply a lack of truth, when sometimes the issues they’re intended to describe are complex and politically charged, as opposed to just true or false.

For instance, in its discussion of “fake news,” the film lumps together claims like “Chinese food gives people the coronavirus” and “The Earth is flat” with any content that questions vaccine safety. The notion that anyone can get COVID-19 by eating Chinese food can easily be dismissed as a silly internet rumor. It’s quickly labeled “fake news,” and once that happens, social media algorithms grab it and hide it from view. That’s okay. Nobody is harmed and nobody misses out on important content that might be educational or helpful.

But can we say the same for posts about vaccine safety, a complex topic made controversial by the fact that Big Pharma has a huge financial stake in the public’s opinion of vaccines?

The film implies as much when, in order to illustrate the “danger” of social media, it uses a reenactment scene of a teen who goes to an extremist rally after being shown conspiracy-style posts online. Spliced into the film’s fictional reenactment are scenes from footage taken at real vaccine-related rallies, showing signs reading “If there is risk, there should be choice” and “Vaccines are not one size fits all.”

Unfortunately, the protest reenactment scene from the film sends the message that all vaccine-related posts — including legitimate posts from parents of vaccine-injured children, citing credible science — belong in the “fake news” category. In reality, thanks to the influence of the multi-billion-dollar pharmaceutical industry, any social media post that dares question the safety or efficacy of vaccines, risks being labeled, at worst, “fake news,” and at best “misinformation.” Once that happens, the posts are often hidden from most news feeds.

Although the film suggests that only those who go down some rabbit hole of crazy conspiracies end up at protests — like that teen depicted in the reenactment — in fact, real-life protests against mandated vaccines, nuclear weapons, police brutality, leaders plundering the planet for profit, bank bailouts and income inequality are all full of real people. It’s wrong to assume these people are always misinformed and by doing so, the movie falls prey to the very concept it criticizes elsewhere: promoting profit-driven agendas.

The movie doesn’t mention that “fake news” and “disinformation” designations can be used to demonize information that strays from mainstream corporate narratives, and that social media companies already use anti-fake news policies to suppress whistleblowing and alternative media reporting. These fact checkers are not always unbiased, as Children’s Health Defense has reported on numerous occasions, because social media companies like Facebook compete for Pharma ad dollars just like TV networks do.

“The Social Dilemma” is correct to point out that Facebook is a great tool for “control of the population.” But we don’t have to “imagine what that means in the hands of a dictator,” as the film proposes. In the U.S. people live under what the late political philosopher Sheldon Wolin called an “inverted totalitarianism,” where the dominant narratives are crafted not by one individual dictator, but by corporations and their steady influence on media organizations and government representatives.

While the social media industry now faces criticism for being a vehicle for the spread of COVID-19-related disinformation, just months ago it had a similar PR problem regarding election disinformation. In response, Facebook entered into an anti-disinformation partnership with the Atlantic Council, a think tank funded by NATO, weapons contractors and oil companies. Whatever one thinks of these entities, it’s a given that they’ll be biased toward war and militarism.

The movie also fails to address the fact that conspiracy theories themselves can serve a corporate agenda. Consider the conspiracy theory of 5G causing COVID-19. As Children’s Health Defense pointed out in April, “allowing [telecom] companies to focus the debate on COVID-19 has given them pretext to censor discussion of 5G and to shift the debate to a battlefield where the science is hypothetical and weak.”

One can see how corporations like Verizon and AT&T might favor spreading the “5G causes COVID-19” conspiracy theory as a distraction: Many consumers may mistakenly conflate legitimate criticism, based on peer-reviewed evidence of harm caused by wireless radiation, with the baseless conspiracy theory. This isn’t just an accidental result of the “attention-extraction model.” It’s a deliberate strategy condoned by a profit-driven industry.

6. Should social media be regulated to curb its negative impact on society?

“The Social Dilemma” suggests regulation as the solution to the systemic problems inherent in today’s social media industry. But is that realistic?

“There are no fiscal incentives for these companies to change. And that’s why we need regulation,” said Joe Toscano, a former Google employee. Jason Rosenstein, a former employee of Google and Facebook, put it this way: “For so long as our economy works in that way and corporations go unregulated, they’re going to continue to destroy trees … Our attention can be mined.”

Social psychologist Shoshana Zuboff takes this argument a step further by suggesting that buying and selling human behavior prediction models should be outlawed.

In theory, regulation could counter at least some of social media’s bad behavior. But the effectiveness of a regulatory strategy will hinge on who shapes future regulation. As long as corporations wield nearly unlimited power over Congress and regulatory agencies, it’s likely social media companies will end up “regulating” themselves, as is the case with many other industries.

“The current situation exists not for the protection of users, but for the protection of the rights and privileges of these gigantic, incredibly wealthy companies,” said Roger McNamee, an early investor in Facebook. Alex Roetter, a former Twitter employee, pointed out the obvious: “At the end of the day, you’ve gotta grow revenue and usage quarter over quarter.”

What can individuals do unless, or until, Congress or regulatory agencies crack down on social media firms? The movie tells viewers to turn off notifications, avoid clicking on videos that YouTube “recommends” and limit screen time for children.

“The Social Dilemma” provides valuable insight into how social media companies manipulate their users’ emotions, behavior and opinions. However, the film leaves out much about who benefits from these tools. Still, this documentary can grow our understanding of how social media firms function in our increasingly digital society.

Jeremy Loffredo is a reporter for Children’s Health Defense.