The USA Has No Allies, Only Hostages 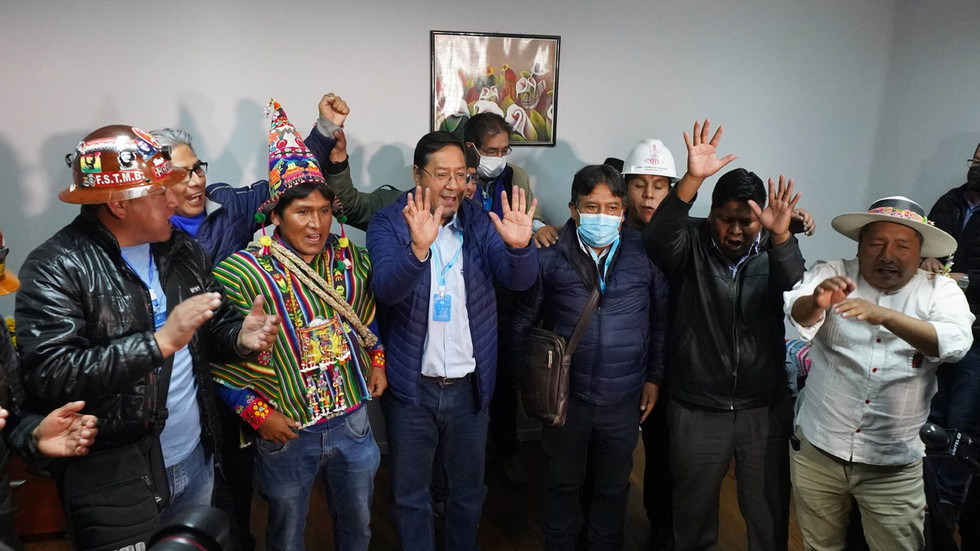 25 Oct 2020 – The US-centralized empire functions like a giant blob that absorbs nations and turns them into imperial client states. Once absorbed, it is rare for a country to escape and rejoin other genuinely sovereign nations.

The new president-elect of Bolivia, Luis Arce, has told the Spanish international news agency EFE that he intends to restore the nation’s relations with Cuba, Venezuela and Iran. This reverses the policies of the US-backed coup regime which immediately began closing embassies, kicking out doctors and severing relations with those nations after illegally seizing power last year.

Arce also spoke of warm relations with Russia and China.

“We are going to re-establish all relations,” he told EFE. “This government has acted very ideologically, depriving the Bolivian people of access to Cuban medicine, to Russian medicine, to advances in China. For a purely ideological issue, it has exposed the population in a way that is unnecessary and harmful.”

If you know anything about US imperialism and global politics, you will recognize that last bit as brazen heresy against imperial doctrine.

Bolivia will restore diplomatic relations with Cuba, Venezuela and Iran, said President-elect Luis Arce in an interview with EFE. He will also re-establish good relations with China & Russia.

The unofficial doctrine of the empire-like cluster of international allies that is loosely centralized around the United States does not recognize the sovereignty of other nations, much less respect them as equals. This empire takes it as a given that it has every right to determine what every nation in the world does, who their leaders will be, where their resources will go, and what their military posture on the world stage will be. If a government refuses to accept the empire’s right to determine these things, it is targeted, sabotaged, attacked, and eventually replaced with a puppet regime.

The US-centralized empire functions like a giant blob that slowly works to absorb nations which have not yet been converted into imperial client states. It is rare that a nation is able to escape from that blob and rejoin the unabsorbed nations like China, Russia, Iran, Venezuela and Cuba in their fight for self-sovereignty, and it is encouraging that it was able to do so.

We saw the dynamics of the imperial blob explained quite vividly last year by American political analyst John Mearsheimer at a debate hosted by the Australian think tank Center for Independent Studies. Mearsheimer told his audience that the US is going to do everything it can to halt China’s rise and prevent it from becoming the regional hegemon in the eastern hemisphere, and that Australia should align with the US in that battle or else it would face the wrath of Washington.

I really like the nervous laughter 😬from Australian audience when John Mearsheimer told them if they choose to b friendly w China, US will show them how nasty it can be…pic.twitter.com/NFZSCIucAZ

“The question that’s on the table is what should Australia’s foreign policy be in light of the rise of China,” Mearsheimer said. “I’ll tell you what I would suggest if I were an Australian.”

Mearsheimer said China is going to continue to grow economically and will convert that economic power into military power to dominate Asia “the way the US dominates the western hemisphere,” and explained why he think the US and its allies have every ability to prevent that from happening.

“Now the question is what does this all mean for Australia?” Mearsheimer said. “Well, you’re in a quandary for sure. Everybody knows what the quandary is. And by the way you’re not the only country in East Asia that’s in this quandary. You trade a lot with China, and that trade is very important for your prosperity, no question about that. Security-wise, you really want to go with us. It makes just a lot more sense, right? And you understand that security is more important than prosperity, because if you don’t survive, you’re not gonna prosper.

“You’re either with us or against us,” he continued. “And if you’re trading extensively with China, and you’re friendly with China, you’re undermining the United States in this security competition. You’re feeding the beast, from our perspective. And that is not going to make us happy. And when we are not happy you do not want to underestimate how nasty we can be. Just ask Fidel Castro.”

Nervous laughter from the Australian think tank audience punctuated Mearsheimer’s more incendiary observations. The CIA is known to have made numerous attempts to assassinate Castro.

If you’ve ever wondered how the the US is so successful in getting other nations around the world to align with its interests, this is how. It’s not that the US is a good actor on the world stage or a kind friend to its allies, it’s that it will destroy you if you disobey it.

As the recently released Palace Letters illustrated, the CIA staged a coup to oust Australian Prime Minister Gough Whitlam because he was prioritizing the nation’s self-sovereignty. Journalist John Pilger wrote in 2014 after Whitlam’s death:

Australia briefly became an independent state during the Whitlam years, 1972-75. An American commentator wrote that no country had “reversed its posture in international affairs so totally without going through a domestic revolution.” Whitlam ended his nation’s colonial servility. He abolished royal patronage, moved Australia towards the Non-Aligned Movement, supported “zones of peace” and opposed nuclear weapons testing.

The primary difference between the coup in Australia and the one in Bolivia was that the Bolivians refused to roll over and take it while we shrugged and said ‘No worries mate.’ We had every option to become a real nation and insist on our own self-sovereignty, but we, unlike the Bolivians, were too thoroughly propagandized and placid. Some hostages escape, some don’t.

The US empire got rid of Whitlam, and then when we elected in 2007 a prime minister who was considered too friendly with China they did it again; in order to facilitate the Obama administration’s “pivot” against Beijing the pro-China Kevin Rudd was replaced by the compliant Julia Gillard. World Socialist Website reports:

Secret US diplomatic cables published by WikiLeaks in December 2010 revealed that “protected sources” of the US embassy were pivotal figures in Gillard’s elevation. For months, key coup plotters, including senators Mark Arbib and David Feeney, and Australian Workers Union (AWU) chief Paul Howes, secretly provided the US embassy with regular updates on internal government discussions and divisions within the leadership…

Rudd had proposed an Asia-Pacific Community, attempting to mediate the escalating strategic rivalry between the US and China, and opposed the formation of a quadrilateral military alliance between the US, India, Japan and Australia, aimed against China.

Gillard, who had cultivated her pro-US credentials through Australia-US and Australia-Israel leadership forums, was literally selected by the US embassy as a reliable replacement to Rudd. In her first public appearance after knifing Rudd, she demonstrated her devotion to Washington by posing for a photo op with the US ambassador, flanked by US and Australian flags. She soon had a phone call with Obama, who had previously twice postponed a planned visit to Australia under Rudd.

The centrality of Australia to the US preparations for war against China became apparent in November 2011, when Obama announced his “pivot to Asia” in the Australian parliament, rather than the White House. During the visit, Gillard and Obama signed an agreement to station American Marines in Darwin and allow greater US access to other military bases, placing the Australian population on the front line of any conflict with China.

Gillard’s government also sanctioned the expansion of the major US spying and weapons-targeting base at Pine Gap, agreed to the US military’s increased use of Australian ports and airbases, and stepped up Australia’s role in the US-led top-level “Five Eyes” global surveillance network, which monitors the communications and online activities of millions of people worldwide.

Rudd’s removal marked a turning point. US imperialism, via the Obama administration, sent a blunt message: There was no longer any room for equivocation by the Australian ruling elite. Regardless of which party was in office, it had to line up unconditionally behind the US conflict with China, no matter what the consequences for the loss of its massive export markets in China.

This is what we’re seeing all around the world now: a slow motion third world war being waged by the US power alliance against the remaining nations which have resisted being absorbed into it. As the most powerful of the unabsorbed nations by far, China is the ultimate target of this war. If the empire succeeds in its ultimate goal of stopping China, it will have attained a de facto planetary government which no population will be able to oppose or dissent from.

I don’t know about you, but I never consented to a world where powerful nuclear-armed forces wave Armageddon weapons at each other while fighting for planetary domination and subverting less powerful nations if they don’t play along with their Cold War games. Detente and peace must be sought and obtained, and we must all work to live together on this planet in collaboration with each other and with our ecosystem.

This omnicidal, ecocidal way of living that the oligarchic empire has laid out for us does not suit our species, and it will drive us to extinction along with God knows how many other species if we do not find a way to end it. Rulers historically do not cede their power willingly, so we ordinary human beings as a collective are going to have to find a way to destroy their propaganda engine, force an end to imperialism, and build a healthy world.

Caitlin Johnstone, an independent journalist based in Melbourne, Australia. Her website is here.