A Troubling Discovery in the Arctic 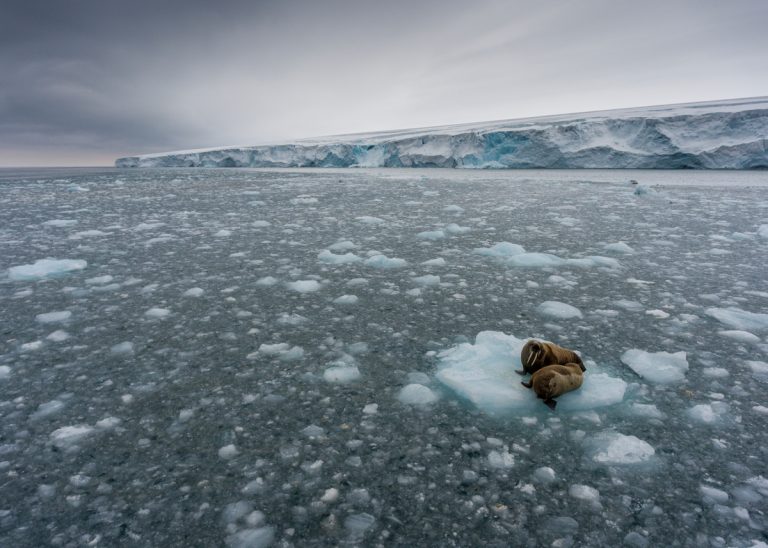 7 Nov 2020 – A notable satellite-telephonic call to colleagues in late October from Swedish scientist Örjan Gustafsson of Stockholm University briefly described a haunting discovery. On board the research ship R/V Akademik Keldysh, a 6,240-ton Russian scientific research vessel equipped with 17 on-board laboratories and a library, far off the coast of Russia, Dr. Gustafsson reported: “This East Siberian slope methane hydrate system has been perturbed and the process will be ongoing.” (Source: Sleeping Giant Arctic Methane Deposits Starting to Release, Scientists Find, The Guardian, Oct. 27, 2020)

That satellite call referenced a sleeping giant that has enough carbon firepower to adversely impact the world’s climate system. The expedition discovered methane (CH4) that had been securely frozen in shallow subsea permafrost waters forever, and ever, and ever, now “stirring.” Colloquially, “The Monster of the North awakened.” (Although, in fairness to accuracy, the ESAS has been perturbed and leaking/seeping into the atmosphere for some time… but, now it’s much worse than ever before, and terrifyingly, it’s more noticeable to passersby, like expeditions of discerning scientists).

After all, there are scientists who believe the East Siberian Arctic Shelf and neighboring Russian coastline continental shelf seas contain enough methane in frozen hydrates to change human history forever, unfortunately, not for the betterment of civilization.

The East Siberian Arctic Shelf, as well as other Arctic seas off Russia’s northern coastline, has been the subject of clashing opinions within the scientific community.

Over the years, mainstream science has “talked down the risks” of a massive methane breakout in Arctic waters which could start a vicious cycle of runaway global warming that would be devastating on several fronts for civilized societies, and uncivilized too.

Three years ago, the U.S. Geological Survey labeled Arctic hydrates as one of the world’s four most serious causation events of abrupt climate change. Yet, according to USGS geophysicist Carolyn Ruppel, who oversees the USGS Gas Hydrates Project: “After so many years spent determining where gas hydrates are breaking down and measuring methane flux at the sea-air interface, we suggest that conclusive evidence for release of hydrate-related methane to the atmosphere is lacking.” (Gas Hydrate Breakdown Unlikely to Cause Massive Greenhouse Gas Release, US Geological Survey, Feb. 9, 2017)

According to USGS calculations, sediments in the Arctic contain a huge quantity of frozen methane and other gases – known as hydrates. Along those lines, it’s important to note that methane (CH4) has a warming effect 80 times stronger than carbon dioxide over its initial 20 years. Meaning CH4 has a sharper, quicker impact on global warming than does CO2.

That USGS position (“no conclusive evidence”) about the risk of methane release is now three years old. Thus, this new discovery prompts a logical question: Does the current expedition provide conclusive evidence of a change? Meaning, what’s the likelihood of an abrupt shift in the planet’s climate system as a result of the new discovery?

Assuming a major CH4 release, or big burp, is it possible it could lead to planet-wide upheaval?  Accordingly, the expedition team reported: “At this moment, there is unlikely to be any major impact on global warming, but the point is that this process has now been triggered.” (Gustafsson)

Therein lies the problem: “It has been triggered.”

Along those lines, a Latin proverb suffices: “Forewarned is forearmed.”  Clearly, the results of the Akademik Keldysh expedition qualify as “forewarned,” no doubt about that.

All of which prompts a significant question: How will countries throughout the world respond to this newly discovered risk to climate systems with its potential to damage agriculture and coastal cities beyond recognition?

In that regard, and based upon the nations of the world failing to adhere to voluntary commitments to the Paris 2015 climate accord to reduce carbon emissions, which in fact increase (Oops) year-over- year, the answer is: “It’s not encouraging, not at all.” Indeed, it is questionable that any nation/state anywhere will actually “forearm” as a result of this new report signaling: “The East Siberian slope methane hydrate system has been perturbed.”

Furthermore, what does “forearmed” even look like? Realistically, how does a country prepare for an all-out assault on agriculture and coastlines by an out of whack runaway climate system? Good luck with that.

Meanwhile, according to the initial report from the 60-member team onboard the Akademik Keldysh expedition, the findings are only “preliminary.” The true scale of the discovery will be confirmed when full complements of data are analyzed and published peer-reviewed in a scientific journal.

Significantly, and tellingly, the discovery includes six monitoring points over a slope area of 150km (93 mi.) by 10km (6 mi.) with “clouds of bubbles released from sediment.” It should be noted that “clouds of bubbles” obviously implies one helluva lot of methane erupting from the seafloor. In point of fact, some measurements registered “methane concentrations 400 times higher than should be seen if the sea and the atmosphere were in equilibrium.” (Gustafsson)

By way of comparison to planetary distances, “400xs higher than equilibrium” is a trip to Pluto.

Robert Hunziker, MA, economic history DePaul University, awarded membership in Pi Gamma Mu International Academic Honor Society in Social Sciences is a freelance writer and environmental journalist who has over 200 articles published, including several translated into foreign languages, appearing in over 50 journals, magazines, and sites worldwide. He has been interviewed on numerous FM radio programs, as well as television.