In submission to magistrates’ court in London, attorneys detail the “politically motivated” case the Trump administration pursued against the WikiLeaks founder. 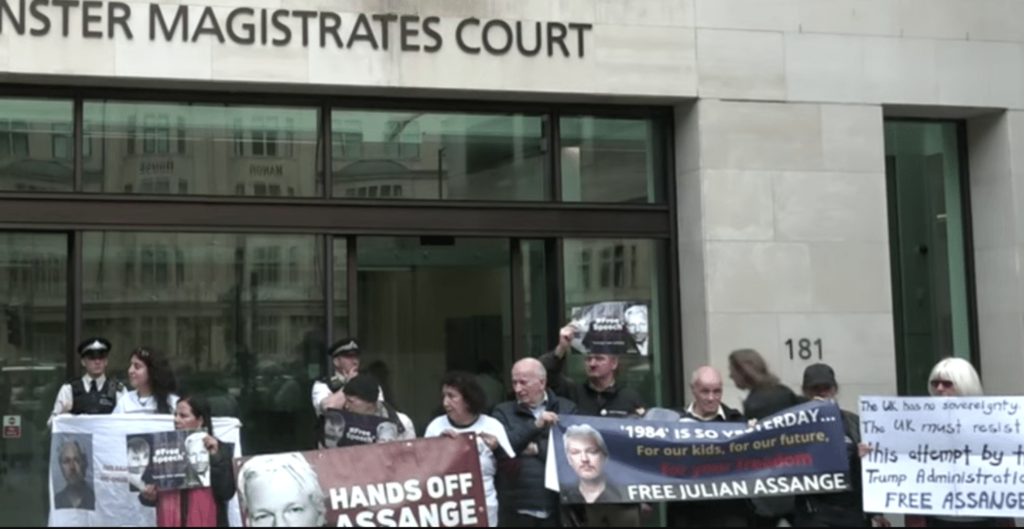 10 Nov 2020 – WikiLeaks founder Julian Assange’s legal team submitted their closing argument to a British magistrates’ court. They argue, “It is politically motivated, it is an abuse of the process of this court, and it is a clear violation of the Anglo-U.S. treaty that governs this extradition.”

The closing argument relies on evidence presented by witnesses, who testified during a trial in September, and details how President Barack Obama’s administration declined to prosecute Assange. President Donald Trump’s administration reversed this “principled” position because of the nature of Assange’s “disclosures to the world and the nature of his political opinions, which inevitably attracted the hostility of the Trump administration and the CIA.”

Prosecutors will submit their closing argument on November 20, and Judge Vanessa Baraitser is expected to rule on the extradition request on January 4.

While Trump’s campaign for re-election failed, the outcome of the U.S. presidential election is not expected to impact the decision. (In fact, the submission contains zero references to President-elect Joe Biden.)

Assange was charged by the United States Justice Department with 17 counts of violating the Espionage Act and one count of conspiracy to commit a computer intrusion that contains elements of an Espionage Act offense.

The charges criminalize the act of merely receiving classified information, as well as the publication of state secrets from the U.S. government. It targets common practices in newsgathering, which is why the case is widely opposed by press freedom organizations throughout the world.

All of the charges relate to the documents Pfc. Chelsea Manning provided to WikiLeaks in 2010.

Assange’s defense refers to the “political agenda” of the Trump administration and their “obvious hostility” to Assange’s “exposure and condemnation of U.S. war crimes and human rights abuses.”

Beginning in 2017, Trump officials publicly condemned Assange. Charges were “ratcheted up” between December 2017 and June 2020, and “breaches of the rule of law” allegedly occurred, as Assange was targeted by a U.S. intelligence-backed surveillance operation while he lived under political asylum in the Ecuador embassy in London.

What unfolded was an “unprecedented prosecution for the receipt and publication of documents, where the international publications were plainly in the public interest,” the legal team contends.

The Washington Post reported on May 24, 2019, that the decision to indict Assange under the Espionage Act led to protest and the resignation of career prosecutors in the Justice Department.

Back in 2013, former Justice Department spokesperson Matthew Miller told the Post, “If you are not going to prosecute journalists for publishing classified information, which the department is not, then there is no way to prosecute Assange.” Miller later said Assange acted as a publisher and not a hacker. So, the Obama administration never charged Assange.

In February 2017—Trump’s first month in office—WikiLeaks published “CIA espionage orders” that called attention to how major political parties in France were “targeted for infiltration” in the run-up to the 2012 presidential election.

About a month later, WikiLeaks brought further scrutiny to the CIA when they published the “Vault 7” material, which they described as the “largest ever publication of confidential documents on the agency.”

The files exposed the CIA’s “fleet of hackers,” who targeted smartphones and computers. They called attention to a program called “Weeping Angel” that made it possible for the CIA to attack Samsung F8000 TVs and convert them into spying devices.

As CNBC reported, the CIA had 14 “zero-day exploits,” which were “software vulnerabilities” that had no fix yet. The agency used them to “hack Apple’s iOS devices such as iPads and iPhones.” Documents showed the “exploits were shared with other organizations including the National Security Agency (NSA) and GCHQ, another U.K. spy agency. The CIA did not tell Apple about these vulnerabilities.”

WikiLeaks additionally revealed that the CIA targeted Microsoft Windows users, as well as Signal and WhatsApp users, with malware.

Mike Pompeo, who was the CIA director, responded to the publication on April 13, 2017. “The false narratives that increasingly define our public discourse cannot be ignored. There are fictions out there that demean and distort the work and achievements of CIA and of the broader intelligence community.”

“And in the absence of a vocal rebuttal, these voices—ones that proclaim treason to be public advocacy—gain a gravity they do not deserve. It is time to call these voices out. The men and women of CIA deserve a real defense.”

“That is one of the many reasons why we at CIA find the celebration of entities like WikiLeaks to be both perplexing and deeply troubling.”

Pompeo said Assange had “no First Amendment freedoms” because “he is not a U.S. citizen,” which to Assange’s legal team was a preview of the legal theory top administration officials later “devised” to justify pursuing charges.

“We’ve had administrations before that have been squeamish about going after these folks under some concept of this right-to-publish,” Pompeo also declared.

A Target Of Espionage And Lawfare

Unlike the Obama administration, Pompeo would not let principles of freedom of the press under the Constitution stop the CIA from seeking revenge—through espionage and lawfare.

“By then, prosecution had become a political imperative, and they wished to counteract the potential effects of the granting of diplomatic status by Ecuador.”

Extralegal measures were taken that involved making attorneys representing Assange priority targets for surveillance. Legally privileged papers were seized by Ecuador authorities so they could be handed over to the FBI’s office in the United Kingdom.

Furthermore, the legal team for Assange sees a connection between this prosecution and the Trump administration’s retaliation against the ICC. They sanctioned ICC officials in June after the body asserted the authority to investigate war crimes by U.S. forces in Afghanistan.

Pompeo and Attorney General Bill Barr stated, “Those who assist the ICC’s politically motivated investigation of American service members and intelligence officers without the United States’ consent will suffer serious consequences. The Department of Justice fully supports these measures and will vigorously enforce the sanctions imposed today under the executive order to the fullest extent of the law.”

Numerous examples were raised by witnesses at the extradition trial and mentioned in the closing argument submitted to the court.

The CIA and U.S. forces were involved in extrajudicial assassinations in Pakistan. Civilians were killed.

European countries were pressured by U.S. officials to not investigate torture. This included efforts to ensure the German government did not prosecute CIA personnel involved in the abduction, rendition, and torture of German citizen Khaled el-Masri, who submitted testimony in defense of Assange.

According to diplomatic cables published by WikiLeaks, the Yemeni government held their own citizens in prison for the U.S. government, even though they had “no evidence they were involved in terrorist acts.”

The CIA enlisted U.S. officials to spy on the UN Secretary-General, UN Security Council members and foreign diplomats at the UN in New York in violation of international law. Officials were encouraged to collect “DNA samples, iris scans, and computer passwords” of foreign government officials.

Measures were put in place to limit the scope of the “Chilcot Inquiry,” which was established to examine the British government’s involvement in the Iraq War.

U.S. war crimes in Iraq were exposed, including a 2006 raid by U.S. troops, where an elderly woman and her five-month old child were killed. An airstrike was called in to wipe out evidence of the killing. (This revelation eventually led to the withdrawal of U.S. troops because the Iraqi government refused to grant soldiers immunity for war crimes.)

The closing argument asserts, “It is highly significant that the Department of Justice under the Obama administration recognized that it would be both wrong and impolitic to prosecute Julian Assange.”

“It is equally significant that the DOJ under the Trump administration, for blatantly political reasons, was pressured into reversing the approach of the Obama administration and prosecuting Julian Assange despite the implications of the prosecution for the constitutional protection of the First Amendment, and despite the nature of the revelations.”

“Indeed,” as attorneys conclude, “the prosecution was part of a political drive to punish leakers, intimidate journalists, and assert worldwide U.S. impunity for war crimes, rendition, and torture.”